Now Is the Time for the U.S. to Stand With Hong Kong

This has been one of the darkest weeks in the Hong Kong protest movement. On Monday, one police officer shot a protestor with a live-round from point-blank range, another was filmed driving a motorbike into a group of protesters; in a separate incident, a protester set a man on fire during an argument. On Tuesday and Wednesday, the universities literally became battlegrounds as riot police stormed campuses and put students under siege.

With the ongoing impeachment inquiry into President Trump, Brexit paralysis continuing in Britain, and turmoil in the Middle East, the attritional protests in Hong Kong could easily end up neglected and forgotten. But now more than ever, Hongkongers need our solidarity.

Grassroots groups have sprung up in major world capitals with a simple message: “Stand with Hong Kong”. In the United States, their activism has focused on one call: the passage of the Hong Kong Human Rights and Democracy Act through Congress. Hundreds of thousands of Hong Kongers have taken to the streets to make this plea to U.S. Senators. The act would be a symbolic statement that human rights and democracy are at the heart of U.S. policy in Hong Kong.

It has never been more badly needed. Monday’s protests were triggered by the news that a young student had died on Friday after being found with serious head injuries near the site of a protest. The Hong Kong Police Force are routinely calling protestors ‘cockroaches’, and a recent survey said that more than half of the Hong Kong public no longer have any trust in police officers. Suspected triad gangsters have attacked civilians and pro-democracy candidates (a conservative politician has also been stabbed), and allegations have surfaced of police officers gang-raping young people while in detention. Excessive and escalating police brutality has generated an almost complete breakdown of trust. A minority of the protestors have begun to meet violence with violence, sending Molotov cocktails firing.

Read more: The Freedom Hong Kong Needs Most Is Freedom From Violence

It would be easy for the Hong Kong government to compromise, but they consistently reject this route. The decision to disqualify Joshua Wong from standing in the District Council election earlier this month was the latest in a long series of political blunders.

The protestors have no help from their own government, and so are looking to the world to assist. They focus on the Human Rights and Democracy Act because it contains powerful provisions which would strengthen their hand. It guarantees that pro-democracy protestors who are arrested do not find their applications for visas blocked after a political trial; it ensures that the violators of human rights bear the consequences of their actions through the application of Magnitsky sanctions; and it sends a clear signal to China that it cannot erode the city’s autonomy and freedoms while reaping the benefits, by strengthening State Department scrutiny of Hong Kong’s freedoms.

In early October, the bill passed unanimously through the House of Representatives, and today it was fast-tracked onto the Senate floor. This sense of urgency is commendable because with every day that passes, Hong Kong reaches closer to the point of no return. The Senate is right to press on before it is too little, too late. The window of opportunity for the United States to constructively intervene to protect human rights and freedoms is swiftly narrowing. The death of the young protestor on Friday is the most grievous tragedy yet, and the bill should be voted on before another similar incident takes place.

There has never been a more important time for legislation of this kind. Congress has the opportunity to courageously take a stand with the people of Hong Kong. They should take it. 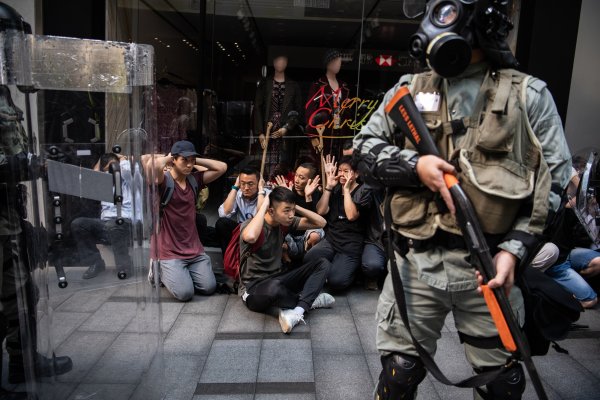