It should have been a normal ride home. But when the passenger train pulled into Yuen Long station on the outskirts of Hong Kong Sunday night, the doors opened onto a blood-splattered platform and a bat-wielding mob. People screamed as assailants in white shirts stormed the carriages, as seen in footage broadcast live and a video shot by a lawmaker.

Protesters returning from a pro-democracy march in the city center, as well as journalists and bystanders, were battered with sticks, umbrellas and what appeared to be metal rods. Viral videos showed people being beaten as they scrambled up escalators to escape; others were chased onto an idle train, cornered and assaulted. One young man was seen pleading for peace before an attacker lunged toward him and punched him in the face. By the end of the rampage — which lasted roughly two hours in two waves of violence — 45 people were hospitalized, one in critical condition, according to the city’s Hospital Authority. Throughout much of the ordeal, police were nowhere to be seen.

On Monday, police seemingly confirmed the link, arresting six men, including suspected members of the triads.

“Is Hong Kong now allowing triads to do what they want, beating up people on the street with weapons?” legislator Lam Cheuk-ting told local broadcaster RTHK. Lam was hospitalized with lacerations on his face.

Hong Kong’s mysterious Mafiosos have often been accused of setting goons-for-hire on protesters. But as the semi-autonomous Chinese enclave contends with a full-tilt rebellion against Beijing’s control, the suspected triad involvement marks a dangerous new flashpoint that experts say will almost certainly provoke more violence.

While the triads, once pervasive operators of Hong Kong’s seedy underbelly, are believed to be fewer in number than they were a few decades ago, they are still active among the prostitution, gambling and drug rackets in Hong Kong, Macau and Taiwan. But since the former British colony was transferred back to Chinese sovereignty in 1997, some gang leaders have tried to assume a veneer of legitimacy through more conventional enterprises like land development. And to China’s ruling Communist party, they have served as a force that can be leveraged to maintain social order in the rogue territory, and are willing to take on “dirty jobs,” according to Tit Wing Lo, a professor at the City University of Hong Kong and an expert on triads.

“The Communist Party gives them a lot of money and in return they may be asked to maintain stability through what we call extra-legal governance,” he tells TIME. This, Lo adds, is what may have happened in Yuen Long, a town near the Chinese border where two major triad groups have long held sway. But triad involvement would be hard to legally prove, operating as they do in the shady margins of society.

In this image taken from a video footage run by The Stand News via AP Video, white shirted men attacked a man dressed in black shirt at a subway station in Hong Kong on July 21, 2019.
Anonymous—AP

The idea that Beijing might rely on vigilantes-for-hire in Hong Kong, which handles its own policing and security affairs, was made explicit in 1993 by then-chief of China’s Public Security Ministry Tao Siju. “As long as these people are patriotic, as long as they are concerned with Hong Kong’s prosperity and stability, we should unite with them,” writer and academic Louisa Lim quotes Tao as saying in the New Yorker.

Since then, several attacks on Beijing’s opponents in Hong Kong have brought whispers of triad involvement, including the gruesome slashing of former newspaper editor Kevin Lau with a meat cleaver in 2014. Later that same year, a similar attack on pro-democracy demonstrators by pro-Beijing forces was also blamed on triads trying to break up the movement.

“When people’s perception of the police is negative, that’s when the triads are brought in,” says Lo.

Public opinion of the city’s embattled police force has plummeted over the course of the two-month demonstrations, with many criticizing the officers’ use of force to clear protest sites. Demonstrators, who have condemned the “evil police” and besieged the force’s headquarters, have demanded an independent inquiry into alleged police brutality. As the most visible manifestation of an otherwise stonewalling government, the rank and file bear the brunt of protesters’ rage against the authorities. Anger has only swelled since Sunday’s melee, when police were accused of looking the other way as criminal syndicates ran amok.

This image taken from a video shows confrontation between masked assailants and protesters at Yuen Long MTR train station in Hong Kong on July 21, 2019.
Lam Cheuk-ting—AP

“Hong Kong has 1 of the world’s highest cop to population ratio. Where were @hkpoliceforce?” pro-democracy lawmaker Ray Chan tweeted. On Sunday night, hundreds of protesters reportedly gathered outside the local police station to file a report about the Yuen Long attacks, but were met with a shuttered entrance. A video went viral appearing to show officers, upon their eventual arrival, chatting cordially with men in white shirts before parting ways without incident. The comparatively light policing, in stark contrast to recent protests, led to public outrage and some speculation of an unholy alliance. Hong Kong’s Police Commissioner Stephen Lo resolutely denied collusion and blamed the delayed response to a lack of manpower.

That the attack occurred shortly after a group of protesters vandalized a building symbolic of Beijing’s authority — the Chinese government liaison office — led to speculation that it was a reaction to the perceived insult. But Steve Vickers, CEO of risk consultancy Steve Vickers and Associates, says the connection may be tenuous.

“Despite their current image, [the triads] are not actually ‘patriotic,’ just opportunistic,” says Vickers, who ran the Criminal Intelligence Bureau in the colonial administration. He likened the triads presumed role in furthering China’s national interests to the “alleged but unproven CIA and mafia cooperation in the 1960’s.”

“However, and most importantly, and before jumping to hard conclusions as to who activated them, and who directed this specific attack, it should also be remembered that Yuen Long has a long history of triad activity … and especially that in the last couple of weeks there has been considerable tension between protestors and local businessmen and other luminaries, who are very opposed to the demonstrators,” he adds.

To prevent a further deterioration in Hong Kong’s crisis, Vickers says the authorities must conduct a “genuine and visible crackdown” on the triads. But even if order is restored, some feel that irrevocable damage has been done, a breaking point has been breached and radical acts have become the new normal.

“We’ve to admit that some HKers have now seen violence an acceptable way in handling disputes,” Jeffie Lam, a South China Morning Post reporter who lives in Yuen Long, tweeted after witnessing the bloodshed that spilled across her neighborhood. “Hong Kong is no longer, and would never be, the Hong Kong we used to know.” 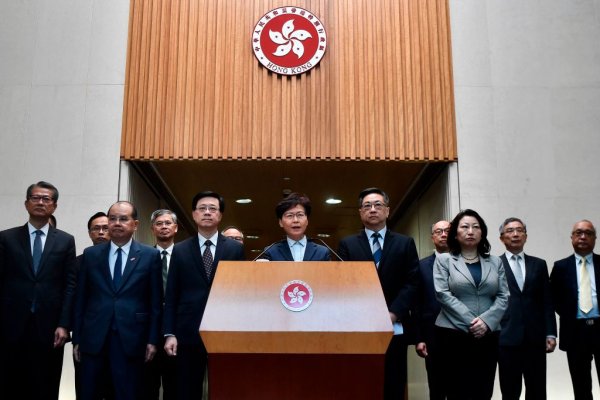 Hong Kong Leader Offers No Solutions After Violence
Next Up: Editor's Pick