Commuters faced chaotic conditions and severe delays across Hong Kong throughout Tuesday as anti-government protesters attempted to enforce a strike for the second day. Unrest broke out at three universities and many schools and businesses were closed. The financial district was also paralyzed.

Local media reported that protesters had thrown objects and at least one petrol bomb onto train lines during the morning rush hour, forcing passengers to disembark and walk along the tracks. Barricades were also set up on major thoroughfares, bringing traffic to a standstill. Protesters hurled rocks at police, who responded with tear gas and rubber bullets.

Tense standoffs took place at several stations, between frustrated commuters and squads of riot police conducting random bag searches and ID checks. Several stations pulled down the shutters. By mid-morning, many workers had given up hope of finding any kind of transport and began setting out for their workplaces on foot.

Police reportedly entered the Polytechnic University campus and were accused of beating a student leader. Clashes broke out at City University, where the office of the president was ransacked, and at Chinese University, where students lobbed petrol bombs at police in an hours-long confrontation. By late afternoon, the university resembled a battleground under a pall of tear gas and smoke from fires. Students began barricading themselves in the campus as the sun went down.

Barricades were also set up on the road outside the enclave’s oldest seat of tertiary learning, Hong Kong University, where protesters dropped heavy objects onto moving vehicles from a footbridge.

At lunchtime, larges crowds gathered in the heart of Central, the financial district, where they occupied key roads. Office workers broke into spontaneous applause as black-shirted radicals passed by.

Many joined the protesters in chanting “Hongkongers, avenge!” Others formed a human chain to pass supplies and bricks to protesters manning barricades, one of which was set up directly outside the luxurious Mandarin Oriental hotel. Police later began clearing the streets with heavy volleys of tear gas.

Office workers and pro-democracy protesters form a human chain to pass bricks during a demonstration in Central in Hong Kong on November 12, 2019.
ANTHONY WALLACE—AFP via Getty Images

“Work is not the most important thing—I can get another job. This is about my freedom,” said 26-year-old Eva, a neatly attired office worker who joined the protests in Central “I didn’t tell my boss where I was going, I don’t care,” she told TIME.

Her colleague, Marco, 24, said: “It’s good to have protests in Central so you can encourage people to come out.”

However, not all bystanders approved. “I admire their passion but they’re going about it wrong,” a 50-year-old executive named James told TIME. “They need to have a dialogue. The harder they make it to do business, the less likely people will come do business here.”

At least one man was set upon and beaten by masked radicals.

Tuesday’s disturbances come after a day of territory-wide violence that saw 287 people arrested—most of them students—in the wake of clashes on university campuses and in several districts. Scores were injured, including two people hospitalized in critical condition. One was a protester who was shot after advancing on an officer who had his weapon drawn. The other was a man set on fire after a dispute with a group of youths.

The U.S. State Department issued a statement Monday saying: “The United States is watching the situation in Hong Kong with grave concern. ‎We condemn violence on all sides, extend our sympathies to victims of violence regardless of their political inclinations, and call for all parties—police and protestors—to exercise restraint.”

The department added: “The increased polarization within Hong Kong society underscores the need for a broad-based and sincere dialogue between the government, protestors, and citizenry writ large.”

However, efforts by Hong Kong’s Beijing-backed leader, Chief Executive Carrie Lam, to hold Town Hall-stye dialogues with the public stalled after she was lambasted at the inaugural event in September. The political climate has deteriorated sharply since. In the late afternoon Tuesday, a police superintendent told reporters that Hong Kong society was “on the verge of a breakdown.”

During a press conference yesterday, the embattled Lam refused to give ground so long as the protests remained violent.

“If there is still any wishful thinking that by escalating violence the [government] will yield to pressure to satisfy so-called political demands, I am making this statement clear and loud here: that will not happen,” she said.

A man is escorted by firemen on the train tracks at Sha Tin MTR station due to the disruption of the train services in Hong Kong on November 12, 2019.
PHILIP FONG—AFP via Getty Images

The unrest has meanwhile raised concerns over the viability of the district council elections in 12 days’ time. Although the councils are the lowest tier of political organization, elections to them are seen as Hong Kong’s fairest and most democratic, because they are conducted on the basis of universal suffrage—unlike the vote for the city’s leader, which is restricted to just 1,200 carefully vetted and mostly pro-establishment electors in a city of 7.4 million.

The current elections are regarded as a bellwether of support for the anti-government protests, which are now in their fifth month. Speaking at a hastily convened press conference Tuesday morning, Lam said: “We still hope we can hold the elections and try our very best to,” but warned of “an issue of safety and order.”

Failure to hold the vote will be regarded by protesters as an attempt by the government to bolster the position of conservative parties—who currently hold a majority across Hong Kong’s 18 district councils—and will likely become a flashpoint for further unrest.

Sparked in June by a now withdrawn extradition bill, Hong Kong’s protests have escalated into a violent push for greater political freedom. Many protesters also demand more autonomy from Beijing, or even secession from China, which resumed sovereignty over the former British colony in 1997.

—With reporting by Amy Gunia/Hong Kong 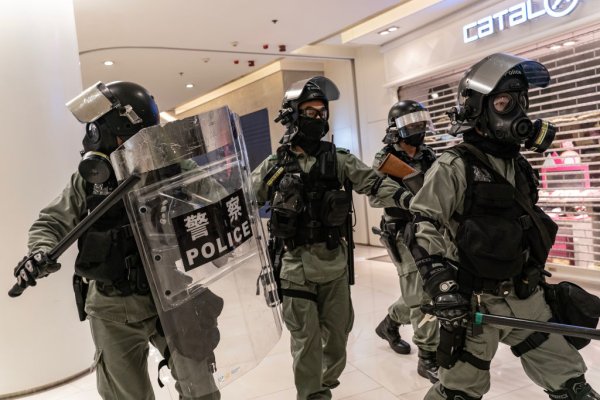 Hong Kong's Police Watchdog Unable to Do Its Job: Experts
Next Up: Editor's Pick