Another person in Hong Kong has died in protests that have convulsed the financial hub since June, a fatality that comes just after China’s leader issued his most direct rebuke of the unrest yet.

A 70-year-old cleaner who was believed to have been hit in the head during a skirmish between protesters and residents died Thursday evening, the Hospital Authority confirmed. According to a government statement, the man was on his lunch break when he was struck by “hard objects hurled by masked rioters.”

At a press conference Friday, Senior Superintendent of Crime Chan Tin-chu encouraged any witnesses to come forward. After reviewing video footage of the incident in Sheung Shui, a suburb near the Chinese border, he said police believe the attack was “malicious” and are investigating it as a murder.

“Bricks were deliberately hurled towards him and he died later on,” Chan said.

The man’s death follows less than a week after a student protester sustained a fatal injury after falling from a parking garage during demonstrations. While the circumstances leading to the student’s fall remain unclear, many supporters of the protest movement see him as a martyr, and his death galvanized a fresh round of strikes and protests that have roiled the city for five consecutive days.

Beijing firmly supports Hong Kong’s leader, the police and the courts “in severely punishing the violent criminals,” he said in rare comments on the situation, according to Chinese state media.

In a warning to protesters, he added that the “continuous radical violent activities in Hong Kong” threatened the “one country, two systems” agreement that grants the semi-autonomous territory civil liberties not exercised on the mainland.

His warning went unheeded Friday with traffic still snarled and train services disrupted by protesters occupying major thoroughfares and parts of the railway tracks. Schools and universities remained shuttered, and many businesses encouraged employees to stay home. At lunch time, office workers once again poured onto the streets to join flash mobs supporting the anti-government demonstrators.

Every day this week, white collar workers have been seen helping erect roadblocks and facing off with police, even as the clashes have become increasingly violent.

After some of the fiercest battles in six months of unrest erupted on the outskirts of academic institutions earlier this week, student demonstrators barricaded themselves inside their university campuses. Behind the walls of the fortress-like campuses, black-clad demonstrators have stockpiled Molotov cocktails, swords and arrows in anticipation of further brawls with police.

Several universities have suspended classes for the duration of the semester, and allowed an exodus of international students.

Early Friday morning, students at the Chinese University of Hong Kong agreed to reopen one lane in each direction of the Tolo Highway, demanding in return that within the next 24 hours the government commits to holding local elections.

The Nov. 24 district council vote is seen as a referendum on the protest demands for greater democratic rights. But pro-democracy activists fear the government may use the increasing violence as a reason to cancel the polls.

With no end to the protests in sight, Asia’s financial capital is struggling. The territory of 7.5 million has fallen into a recession as tourists stay away and high-end shopping malls are transformed into battlegrounds.

In the face of a deepening crisis, Hong Kong’s Chief Executive Carrie Lam has doubled down on her insistence that there will be no capitulating to the protesters’ demands. Earlier this week, she called it “wishful thinking” that the government would yield to the “escalating violence.” 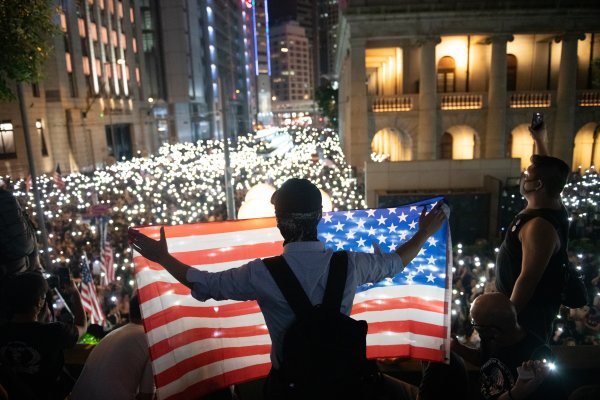 Now Is the Time for the U.S. to Stand With Hong Kong
Next Up: Editor's Pick