Inside 'Rioters' U,' the University That Has Seen Some of the Worst Clashes in Hong Kong

On a leafy college campus in Hong Kong Wednesday, the usual bustle of academic activity gave way to frenetic preparations for a revolution.

Instead of book bags, the students lugged carts full of bricks to the entrance gates, where sentries in black balaclavas monitored the steady flow of incoming supplies. Classrooms were emptied of their tables and chairs, the furniture repurposed to block unwanted traffic on the roads, bridges and nearby railway tracks on which a small fire smoldered.

While lectures and study halls might have filled the schedules on any other day, this afternoon the undergraduates of the territory’s second-oldest university, the Chinese University of Hong Kong (CUHK), practiced throwing Molotov cocktails behind a row of empty buses.

“Whatever happens, we must defend the university, we must not allow the police to take it,” says Simon, 21.

He studies at a different university, but he trekked here yesterday evening after students called for reinforcements as they clashed with police in some of the most violent fighting Hong Kong has seen over the past five months of unrest. Students lobbed literally hundreds of petrol bombs at police, who responded with rubber bullets and heavy volleys of tear gas. Plumes of smoke from large fires gave the campus the appearance of a battlefield.

CUHK has gained a reputation for being an epicenter of protest activity, noteworthy even among other campus hotbeds. Chinese state media has labeled it the “rioters’ university,” an epithet the students have sarcastically adopted.

At a press conference Wednesday, police chief superintendent John Tse called CUHK “a bad omen” for Hong Kong. “A university is supposed to be a breeding ground for future leaders,” he said, “but it has become a battlefield for criminals and rioters.”

Yesterday’s clashes between black-clad protesters and police raged well into the night, despite faculty attempts to negotiate a ceasefire. Flaming barricades held the police at bay from the fortress-like university, which is perched on a hill above a middle-class Hong Kong suburb.

Between the volleys of rubber bullets, tear gas and bricks, a lone standard bearer hoisted the protesters’ black banner over the battlegrounds, undeterred by the charred debris falling from the sky and the first aiders carrying the wounded away from the front lines.

After several hours, the police and water canon retreated, and the jittery students cheered their victory.

“It was like a war,” says one bespactled student who declined to give his name. “And we successfully held our line.”

Expecting riot police to return, some kept watch all night, while others dozed on the soccer field or in the car park. Come morning, a huge volume of supplies began feeding into the campus, with supporters hauling food, bandages, instant ice packs, clothes, water, and equipment for making petrol bombs, through traffic snarled roads.

Students made quick work of the sidewalks, digging up the bricks as future projectiles. They built up huge flammable barricades on the bridges where the main fighting had taken place the night before. In an oddly medieval scene, some erected a large trebuchet on a bridge overlooking one of the campus entrances, while a student patrolled the grounds armed with a bow and petrol-tipped arrows.

Tuesday’s clashes followed an especially bloody Monday, when a student was shot in the chest and a man critical of the protests was set on fire. Both were sent to hospital in critical condition. Public outcry quickly spread throughout the city and boiled over into flash mobs that hit both the Central business district and working class neighborhoods.

Anger in Hong Kong had been seething for days after the death last Friday of a student protester who fell from a parking garage. Though the circumstances around his fall remain unclear, protesters say he is a victim of the police crackdown.

“It’s been made very clear to us that at any moment we could lose our lives. We know that and we are still out here fighting,” says Yu, a 21-year-old nursing student, who says her parents have no idea she has joined the CUHK protesters. “After people have gotten shot, people have died, we cannot just stop.”

A haze of acrid tear gas lingered on the campus and a thick layer of shattered glass and burned detritus covered the roads. With ash still smeared across their shoes and foreheads, the bleary-eyed commandos said they had to stay vigilant.

“This is no longer just a protest movement, it’s a revolution. It’s like we are at war for Hong Kong’s future,” Yu added. “It is not just a war of Chinese University, it’s a war that involves all the teenagers.”

The black-clad demonstrators marching through the CUHK campus say they are prepared for an indefinite stand. They have turned the gym into a field hospital and set up triage centers in front. The Molotov Cocktail assembly line has already ensured boxes and boxes of gas-fillled bottles are at the ready. Many of the buildings have been covered in revolutionary slogans. “Rebellion is coming,” says one. “Heaven will slay the communist party,” says another.

“If they continue to refuse to listen to us, then the whole Hong Kong situation will deteriorate,” says Jonathan, a 19-year-old CUHK student who manned a footbridge on Wednesday afternoon after battling the police late the previous night.

“If we are defeated in this movement, we will be completely controlled by the communist party. We will lose our freedom. Look at the mainland, they don’t even have the right to criticize their government,” he said. “Democracy may not be perfect, but it is the best option. And we must fight for it.”

Concerned by what they see as Beijing’s encroachment over their freewheeling city, protesters are demanding greater democratic freedoms as well as an inquiry into alleged police brutality. But the city’s embattled leader has vowed there will be no further concessions, leaving what seems to be an indefinite impasse.

“We have no way back. We cannot retreat and cannot lose this campus,” Jonathan says. “We can rest another day. Today we must be prepared to defend what is ours.”

—With reporting by Abhishyant Kidangoor and Hillary Leung / Hong Kong 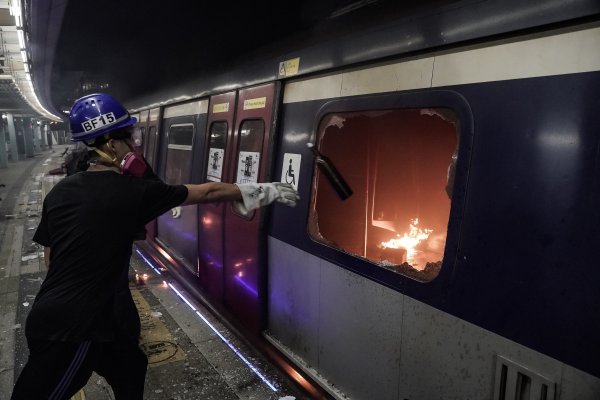 Citywide Unrest in Hong Kong Enters a Third Day
Next Up: Editor's Pick