A Gorgeous Ford v Ferrari Demands a Drive to the Theater

Now that there’s so much great storytelling on TV, and so many esteemed directors are making films you can watch at home just weeks after they’re released in theaters, the question “Why go to the movies at all?” is more valid than ever. Ford v Ferrari, a based-on-real-life entertainment from James Mangold, holds a few of the answers: It’s gorgeous to look at—you might wish you could climb right inside its cockpit. And while there’s plenty of fun to be had watching cars move really fast on a small screen—31 million NASCAR viewers can’t be wrong—it’s far more pleasurable to see great stunt driving rendered larger than life. Ford v Ferrari is a little too long; some scenes leave unnecessary skidmark trails. But the movie still has amiable style and energy to spare. It’s fast but never furious.

Matt Damon plays plainspoken automotive designer and entrepreneur—and onetime race-car driver—Carroll Shelby, who, as the movie opens, circa the mid-1960s, is forced to give up his driving career because of health issues. He decides to walk on a different wild side, taking on a seemingly impossible challenge: Helping the Ford Motor Company develop a race car that will rival those built by the European master Enzo Ferrari; the goal is to win at the grueling, 24-hour race known as Le Mans. Shelby is almost cocky enough to know how to build a car like this on his own. But he’s smart enough to enlist the best driver and racing engineer he knows, the English-born, Los Angeles-based Ken Miles (Christian Bale), a freewheeling, tea-loving bloke who knows the delicate mechanics of race cars inside and out but doesn’t do so well with human beings. The car Ken and Carroll initially develop together goes to Le Mans, but Ken, to his great disappointment, doesn’t—his prickly personality stands in the way.

What happens next is known to racing enthusiasts but should be left as a surprise to everyone else. (Although Ford v Ferrari is based on different source material, the basic story is told in A.J. Baime’s 2009 book Go Like Hell: Ford, Ferrari, and Their Battle for Speed and Glory at Le Mans.) Ford v Ferrari works as an entertainment for dozens of reasons, not least of which are the performances. What a joy to watch Christian Bale unencumbered, as in last year’s Vice, by rubbery prosthetic jowls or, as that Dark Knight guy, having to suffer the indignity of wearing those dumb, somber-looking bat ears! He has an easygoing, Artful Dodger-style swagger that keeps the movie whirring. Ken’s son, Peter Miles, is played by the wonderful young actor Noah Jupe (who can also be seen opposite Shia LaBeouf in Honey Boy); he brings a remarkable subtlety to the movie’s most intense sequences. Tracy Letts plays the arrogant Henry Ford II: his performance seems boisterously, enjoyably overdone at first—and then, on a dime, it shifts into the dark territory of vulnerability. The young Ford henchman (and future Chrysler exec) Lee Iacocca is played, with skinny-tie suaveness, by John Bernthal. Was the young Lee Iacocca ever this good-looking? Who cares? This is no time to argue with movie magic.

The production design of Ford v Ferrari, though precise and period-specific, also has a lived-in look: Even the transistor radios look as if the dials have been worn down slightly by human fingers. That attention to detail is part of what makes this movie—shot by Phedon Papamichael—such a gorgeous-looking piece of work, a reverie of ramshackle, grease-stained garages and California sunsets. And the racing scenes are marvelous to behold. For a person who hasn’t been behind the wheel of a car since 1986, I’m unaccountably nuts about old-fashioned, well-shot and -edited movie stunt driving, and Ford v Ferrari has lots of it. (Andrew Buckland, Michael McCusker, and Dirk Westervelt are credited as the film’s editors.) The cars themselves are jewel-like in their sleekness. They swerve and curve around twists and turns, often on rain-slicked surfaces, passing one another like nervy manmade race horses. Sometimes they dramatically crash and explode. It’s always clear where one car is in relation to another: There’s no crazy slice-and-dice cutting here. The racing scenes have a beautiful visual logic. Ford v Ferrari is a natty diversion that earns every inch of its right to be seen big. Drive, don’t walk, to see it. 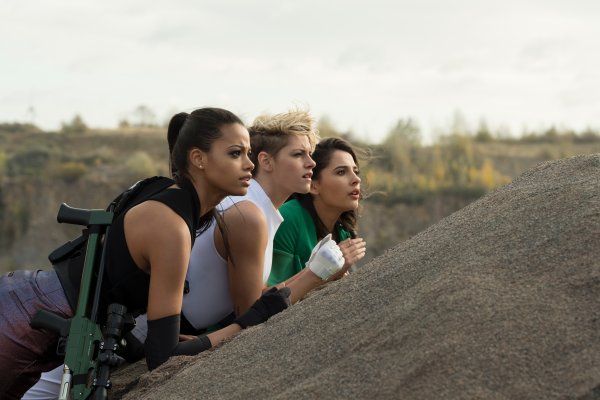 Charlie's Angels Fails to Give Kristen Stewart the Glamorous Action Movie She Deserves
Next Up: Editor's Pick