With Meryl Streep on Big Little Lies, It's Time to Admit That Film and TV Are Converging

You hear her before you see her. Less than three minutes into the second season of Big Little Lies, as images crescendo into violence, a familiar, mellifluous female voice whispers the first line of the premiere: “Celeste.” As Nicole Kidman’s Celeste awakens, screaming, from her nightmare, cool gray eyes peer down at her through wire-rimmed glasses, radiating calm, concern and a hint of menace; the small mouth puckers determinedly. And in TV’s most anticipated character debut of 2019, Meryl Streep arrives in Monterey.

It’s not as if Big Little Lies was suffering from a lack of star power. The female-driven HBO miniseries, whose popularity and awards appeal catalyzed an absorbing second season that premieres on June 9, was a product of the friendship between two of its executive producers and stars, Kidman and Reese Witherspoon. It came stacked with an A-list cast even beyond those two, co-starring Shailene Woodley, Laura Dern, Zoe Kravitz, Alexander Skarsgard and Adam Scott. Behind the scenes, Emmy-winning creator David E. Kelley (Ally McBeal, The Practice) and Oscar-nominated director Jean-Marc Vallée (Dallas Buyers Club, Wild) upped its cultural cachet. (British filmmaker Andrea Arnold, best known for her 2009 indie masterpiece Fish Tank, directs Season 2.) The addition of Streep only confirms that TV is now capable of drawing ensembles that could rival those of any Ocean’s movie.

In the 21st century, tectonic shifts in the entertainment industry have undermined the decades-old assumption that cinema can be art but–PBS aside–television rots your brain. Yet since Big Little Lies’ 2017 debut, the hierarchy of film over TV acting has ceased to exist. This year’s Oscar-winning lead actors, Rami Malek and Olivia Colman, ascended directly from the small screen. Meanwhile, Julia Roberts made Homecoming, Mahershala Ali revived True Detective, and Amy Adams gave a stunning performance in Sharp Objects. Fosse/Verdon turned on the interplay between Sam Rockwell and Michelle Williams. When George Clooney’s Catch-22 hit Hulu in May, hardly anyone seemed to notice.

This isn’t just a sign that TV is catching up to film as an art form. As streaming changes the way we consume episodic entertainment, blockbuster franchises are increasingly reliant upon serialized storytelling, while monoliths like Disney, Apple, Amazon and Netflix keep finding new ways to disrupt both industries. As a result, the mediums are actually converging. Despite the fuming of traditionalists like Steven Spielberg–who recently dismissed Netflix releases such as Alfonso Cuarón’s Oscar-winning Roma as made-for-TV movies–and the terrifying power of megacorps in the new entertainment landscape, this confluence has the potential to revitalize what we watch.

The division between film and TV has always felt somewhat artificial; they are not two distinct art forms but rather subsets of the same, just as novels and short stories are both types of literature. For decades, these commonalities have been reflected in the substantial overlap between the two mediums’ funders, distributors, facilities and technical personnel. The biggest change, in recent years, is in the attitudes of audiovisual media’s most visible creative workers: directors, screenwriters, actors. Once a stepping-stone to big-screen fame and freedom, TV has become less of a grind thanks to the increased budgets, flexible time commitments, audience specificity and sheer demand for diverse, original programming ushered in by cable and streaming. For those at the top of the food chain, it serves as a refuge from superheroes, CGI and scripts flattened for international appeal–and a place to experiment with long-form storytelling.

This has made it a godsend for some of cinema’s greatest behind-the-camera talents. In defiance of the cliché that television is a writer’s medium while a movie belongs to its director, the roles of filmmaker and TV creator have proved pretty fluid. The triumphs of TV auteurs like Vince Gilligan, Amy Sherman-Palladino and HBO’s three Davids (Chase, Milch, Simon) in the 2000s opened the floodgates for moviemakers on the small screen: Vallée did Big Little Lies and Sharp Objects, while Jane Campion made Top of the Lake. As platforms proliferate and culture fragments, even creative weirdos like Paolo Sorrentino (The Young Pope) and Gregg Araki (Now, Apocalypse) can sell shows without selling out their oddness.

Meanwhile, an influential new generation of creators–like Ava DuVernay, Cary Joji Fukunaga and Jordan Peele–has used this moment to carve out unprecedented careers. Moving seamlessly between movies, TV, fiction, nonfiction, realism and fantasy, they’re building filmographies whose common thread isn’t a form but a set of styles or themes. DuVernay has made a big-budget kids’ movie, a prestige historical biopic, a straight-to-Netflix documentary, a miniseries about the Central Park Five and a Southern family drama–each a meditation on the intersections of race, gender and justice that’s uniquely suited to its format. Steven Soderbergh was a pioneer of this eclectic approach, interspersing action romps and micro-budget indies with fascinating TV projects, from Cinemax’s The Knick to the experimental Washington-pundit drama K Street, which aired way back in 2003 on HBO.

An influx of funds into the television sphere, at a time when risk-averse movie studios only have eyes for franchise spectacles and supercheap horror schlock, has certainly facilitated this shift. Netflix–which is expected to spend $15 billion on content this year–dropped heaps of cash on shows by Baz Luhrmann (The Get Down), the Wachowskis (Sense8) and Frost/Nixon writer Peter Morgan (The Crown), with notoriously mixed ROI. While racking up astronomical episodic special-effects bills, Game of Thrones opened the window to single-episode shoots in excess of 55 days. Now Disney and Apple, which will both launch streaming services this year, have their wallets out. And if Spielberg–who, incidentally, has an anthology series in the works with Apple–doesn’t like watching movies on Netflix, maybe he could persuade the studio system that funded Ready Player One to take calls about grownup films from some of the great directors the streamer has bankrolled, like Dee Rees (Mudbound) and Tamara Jenkins (Private Life). If the 2000s were the golden age of TV, then in recent years TV has expanded so dramatically–and filled so many long-standing voids in American entertainment–that generalizations about its quality are now impossible.

The convergence of film and TV isn’t just a boon to filmmakers who’ve been elbowed out of the multiplex by the blockbuster-industrial complex. It’s also good news from a purely artistic perspective. Increasingly, the biggest difference between the two forms isn’t quality, budget or screen size; it’s length. If brevity is key to the genius of the classic 96-minute western Stagecoach, then David Milch’s brilliant 36-episode western Deadwood demands the slower pace of television. A recent spate of book-to-TV adaptations, Big Little Lies included, has proved that novels often fare best as serials too–which is exactly what Harry Potter, James Bond and the Marvel Cinematic Universe all are.

David Lynch must have understood all this 30 years ago, when he created Twin Peaks, his warped riff on soap operas and cop shows that would’ve made no sense as a stand-alone film. So it was dispiriting when, in the run-up to the 2017 revival Twin Peaks: The Return, he described the new season as an 18-hour movie. By the year’s end, the series was popping up on film critics’ annual best-of lists, implying that the real distinction between movies and TV is merit–that when TV reaches a certain level of quality, it’s not really TV anymore.

Once again, the result is a compelling argument for the convergence of film and TV. Big Little Lies’ episodic structure mines soap-opera tropes, building suspense over an extended period. At the same time, Oscar-worthy performances from its movie-star leads sell characters that could, in lesser hands, be momzilla stereotypes. Big Little Lies doesn’t need Meryl Streep for her cinematic prestige. It needs her because it has a delectably passive-aggressive grandmother character that only Meryl Streep could play. 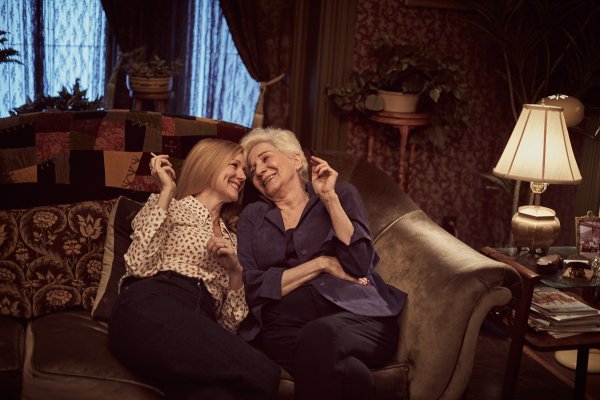 Netflix's Tales of the City Is What Inclusion on TV Should Look Like
Next Up: Editor's Pick