Many actors have donned the Batsuit, from Adam West to George Clooney to Val Kilmer. But with the release of Batman v Superman: Dawn of Justice on March 25, Ben Affleck takes the baton from Christian Bale, who played the character in director Christopher Nolan‘s Dark Knight trilogy. And in a new interview with Australian website FilmInk, director Zack Snyder explains the thought process behind his casting decisions.

“This is a total and opposite reality from the Chris Nolan movies,” he says. “It’s another universe, so we couldn’t hire Christian Bale if we wanted to, because he doesn’t exist in our world.” Snyder said he briefly considered hiring Bale to play another part, joking that he could have played “Alfred with age makeup,” in part to drive home the point that the world of Batman v Superman is so totally different. “In the Batman universe that Chris Nolan created, Superman would have a hard time existing,” he continues. “That’s why we did a reboot on the universe, so we could allow these characters to exist together.

Snyder also explained how Affleck fit his vision of the new Batman. “I really wanted an old Batman–not, like, decrepit! I wanted a world weary Batman… someone who has had experiences, and Ben has really hit that.” Not only did Affleck have the “gravitas” Snyder was looking for, he also had the height. “He’s a big person. He’s 6’4”, and in the boots, he’s 6’6”. I don’t like a small Batman…I like my Batmen bigger!”

Read the full interview, in which Snyder also discusses the debut of Wonder Woman and his take on Lex Luthor, here. 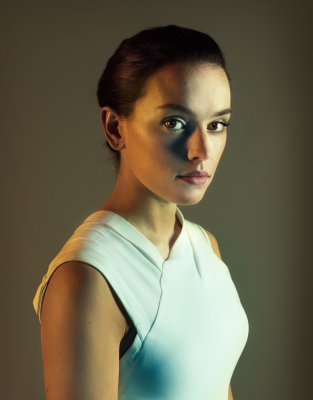 Star Wars' Daisy Ridley Hits Out Against Criticism of Her Appearance
Next Up: Editor's Pick