Traveling to Hong Kong? Here's What You Need to Know

Protests have been roiling Hong Kong for the past five months, but a significant escalation this week has seen public transportation shutdowns, violent protests across the territory and, as of Wednesday, foreign universities recalling their students out of fears for their safety.

Thousands of arrests have been made, hundreds have been injured, and countless petrol bombs have been thrown since the start of the unrest. Schools were suspended this week and many universities—which have become literal battlegrounds between protesters and police—have cancelled lectures for the remainder of the semester.

Businesses have been badly affected. Scores of shops have been ransacked, vandalized and burned, including branches of Starbucks. Malls have also been attacked and routinely bring the shutters down early to avoid trouble.

The U.S. has raised the travel advisory warning for Hong Kong to level two, calling for visitors to exercise “increased caution.” Canada and Australia have also upped their travel alerts, and the U.K. has warned that “the situation around protests and public gatherings can change quickly.”

If you’re planning on traveling to Hong Kong, here’s what you need to know.

Getting to and from the airport

The Airport Express, the rail service that connects the airport to the city in 22 minutes, is still running. But it has experienced delays and frequently skips intermediary stops. Roadblocks on major highways have also caused the rerouting of some airport buses.

After protestors blockaded the airport in August, the Airport Authority heightened security checks. Currently, only those carrying an air ticket for a flight in the next 24 hours, and a valid travel document, are allowed to enter the departure hall. Travelers are also advised to allow sufficient time for travel to the airport.

Travelers walk with their luggage along a road towards the Hong Kong International Airport during a protest in Hong Kong, China, on Sunday, Sept. 1, 2019.
Paul Yeung/Bloomberg via Getty Images

The city’s main means of transportation is the train network. Known as the Mass Transit Railway (or MTR), it has come under heavy attack by protesters. Trains and stations have been set on fire, petrol bombs thrown into train compartments, facilities severely damaged and objects hurled onto the tracks.

In recent weeks, trains have been maintaining limited services, with many stations and sections of major lines frequently closed due to vandalism. Travelers can expect lengthy delays and overcrowding, especially during morning and evening rush hour. Service announcements are made in real-time on the MTR’s Twitter page, and the MTR website provides an overview of service arrangements.

Dozens of bus routes are regularly suspended or diverted when protesters occupy major roads and highways. Booking a taxi or an Uber may be the most reliable way to get around, but they can be very difficult to find during major protests. Be prepared to be flexible on pick-up and drop-off locations.

It can dangerous to attempt to drive through or circumvent a barricade: motorists have been dragged from their cars and beaten for trying to do so. Protesters have also thrown petrol bombs at vehicles ignoring roadblocks.

Ferry routes, which take you across the harbor and connect the city to Hong Kong’s outlying islands, so far remain unaffected.

A train car burns at a MTR station during a demonstration at Chinese University of Hong Kong on November 13, 2019 in Hong Kong, China.
Anthony Kwan—Getty Images

Protests can erupt quickly and have taken place all over Hong Kong—from working class suburbs to the heart of the business district. Tear gas has been fired on the city’s most exclusive streets and barricades erected outside Hong Kong’s smartest boutiques and hotels.

Since Monday, protestors have been holding flash mob-style lunchtime protests—though some have lasted well into the evening—in Central, the financial district on Hong Kong Island. The gatherings have turned violent and led to clashes with riot police.

Admiralty, one subway stop from Central, is home to government offices and the legislature and therefore also a common protest site. So is the shopping district of Causeway Bay, which is home to Victoria Park—a traditional staging ground for marches and rallies

Across the harbor, the neighborhoods of Kowloon Tong and Hung Hom, where there are a number of universities, have seen frequent clashes. So has the tourist district of Tsim Sha Tsui. The tourist strip of Nathan Road—Hong Kong’s fabled “Golden Mile”—has seen frequent arson, vandalism, and battles between protesters and police.

Demonstrators join hands to form a human chain in front of the Peninsula Hotel during the Hong Kong Way event in the Tsim Sha Tsui district of Hong Kong, China, on Friday, Aug. 23, 2019.
Justin Chin/Bloomberg via Getty Images

What to do if a protest breaks out near you

Protests are organized online and can break out with little warning.

While there is no specific threat to tourists, Steve Vickers, CEO of Steve Vickers and Associates—a risk consultancy retained by TIME to advise on security matters—says foreigners should leave if they find themselves in one.

“Ideally you should move away as soon as possible and exit the area,” he says. Many gatherings do not have official approval and your presence could “entail personal risk such as being accused of participating in an unlawful assembly,” he adds.

How to behave if you find yourself in a protest

With protests becoming more violent, heightened caution is essential. A 70-year-old bystander on his lunch break died Thursday after being struck, officials said, by “hard objects hurled by masked rioters.”

People have encountered violence after expressing political opinions. A man was set on fire for arguing with protesters and people have been stabbed for engaging in political disputes. Many others, including women and the elderly, have been beaten for expressing dissenting views. Bystanders, including foreigners, have also been beaten for taking photographs of the protests.

In certain situations, visitors should refrain from wearing black, which is the protest color.

People are detained by riot police during a protest in the Central district of Hong Kong, China, on Wednesday, Nov. 13, 2019.
Laurel Chor/Bloomberg via Getty Images

What to do if you get tear gassed

Tear gas has been discharged liberally in Hong Kong’s main tourist and entertainment areas. Many shoppers and diners have been caught unawares by tear gas not only on the street but drifting into malls and restaurants.

Before you come to Hong Kong, you may want to read up on what to do if you are exposed.

The International News Safety Institute (INSI) has useful advice here on how to protect yourself.

The Centers for Disease and Protection has a comprehensive fact sheet on riot control agents here.

If you have no protective gear but are exposed to tear gas, INSI says you should “cover your mouth and nose with a handkerchief or cloth or use the inside of your coat to protect your airway (the outside of your jacket is likely to be contaminated).”

INSI also advises that you make for higher ground, shower (not bathe) and discard exposed clothing—as agents will remain on clothing for months afterward.

Bystanders react after police fired tear gas to disperse residents and protesters in the Mong Kok district of Kowloon in Hong Kong on October 27, 2019.
ANTHONY WALLACE—AFP via Getty Images

Find out where protests will happen

It is important to plan your journeys around the city. You may wish to establish if protests are going to be held in the vicinity of your hotel and what transportation you will be taking.

This Reddit thread also posts updates on the protests many times daily. Live streams of protests can be viewed here.

The Facebook pages of local media outlets such as Apple Daily and Stand News also live stream protests, capturing where protestors are and where clashes are taking place. Visitors can also download the app HKmap.live to track the whereabouts of police and protestors.

The emergency number in Hong Kong, for police, fire and ambulance services, is 999. 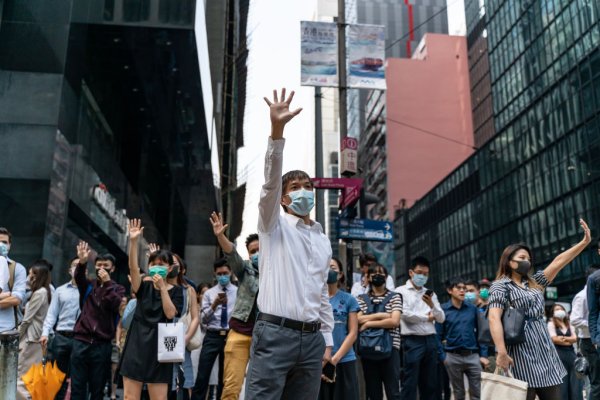