Hong Kong’s Subway System Was Once the City's Pride and Joy. Now It's a Target for Violent Protest

Flames scorched the subway entrance as plumes of dense, gray smoke surged skyward. Wood, traffic cones and cardboard—whatever protesters could lay their hands on—were tossed onto the pyre. Other protesters broke into the station and activated the sprinkler system, flooding the concourse.

On any other Friday evening, Causeway Bay station would have seen a steady stream of rush-hour commuters. But on Friday, Oct. 4, it was a battleground. In a bid to deter participation in the anti-government protests that had roiled Hong Kong for months, the enclave’s embattled administration activated colonial-era emergency regulations to ban the wearing of masks at public gatherings. That evening, furious mobs took to the streets, smashing shopfronts, fighting running battles with police—and destroying dozens of subway stations.

The extent of the damage forced the Mass Transit Railway (MTR)—which records nearly 5 million passenger journeys a day—to completely shut down the next day, for the first time in its 40-year history. More than half the network remained shut three days later, and stations have been closing as early as 6.00 p.m. for repairs ever since.

Attacks have continued. Petrol bombs have been hurled into stations and objects thrown on to the tracks. Fixtures have been destroyed. According to official figures, more than 138 out of 161 stations have been vandalized. Local media reports say that 800 ticket machines, 1,800 turnstiles, and 50 escalators have been wrecked. Protesters have smashed up station offices and even burned recreation rooms for MTR staff. The gleaming airport express link—which makes the 35 kilometer journey from the airport downtown in 22 minutes and is often a visitor’s first impression of the territory—has also been operating at limited capacity and on occasion shut down altogether, adding to the damage done to Hong Kong’s image as a tourist destination.

Globally, Hong Kong’s MTR—which declined to arrange for a spokesperson to be interviewed for this article—is a byword for excellence and efficiency. It exports its expertise to railway systems in mainland China, Melbourne, London, and Stockholm. But to protesters, it is now a major target. They accuse the MTR of colluding with the police and, playing on the system’s Chinese name, scathingly call it “Communist Rail.”

Their chief grievance is the closure of stations at protest sites. The train operator says it does this for passenger safety. The corporation’s chief of operations, Sammy Wong, said during a press conference on Oct. 11, “We have to guarantee the safety of our commuters and station staff, and of our railway service.”

But the protesters say the closures are to deny them the means of getting to or from protests. Images of riot police using shuttered stations as resting and staging areas have fueled the mistrust, although it would presumably be difficult for the MTR to refuse such requests given that the Hong Kong government is a 75% shareholder.

Faith in the system is at such a low ebb that many gloss over the estimated $5 million worth of damage done to it and say that the train operator is closing early each evening not to make repairs but to impose a de facto curfew on the city.

The MTR’s local reputation hit a low point on Aug. 31, when police stormed into a subway carriage at Prince Edward station in pursuit of protesters who had been demonstrating in the area. Harrowing live footage showed officers attacking passengers with pepper spray and batons, seemingly indiscriminately. Many were seen bleeding. The MTR shut the station—because, rumor had it, people had been beaten to death inside, and the MTR wanted to facilitate the removal of the bodies. In the days after, many people left floral tributes. The MTR denied that anybody had been killed, but the fact that such a wild rumor was so readily, and widely, believed underscores how far the once-loved train network—and police force—have fallen in the eyes of many Hongkongers.

Pro-democracy protesters set a fire at the entrance of a subway station in Hong Kong on Oct. 4, 2019.
Anthony Kwan—Getty Images

‘What they’re doing is selfish’

In many ways, an attack on the MTR is an attack on Hong Kong itself—literally and symbolically. The network is the city’s circulatory system, keeping its 7.4 million people on the move across 231 kilometers of track and at admirably low fares. Other than the trip to the airport, no journey costs more than about $6.50. Stations, when they’re not being attacked, are paragons of cleanliness and efficiency.

The rail service has also shaped Hong Kong since the unveiling of its first 15-kilometer line in October 1979. As the network developed over the years, developers followed suit, building residential estates, malls and offices on top of stations, in areas no longer considered far-flung. Chan Chi-kit, a professor at the Hang Seng University of Hong Kong, who researches Hong Kong identity, says the railway represents the modernization of the city, “shaping the memories of generations of Hongkongers.” But, he adds, “Whether the MTR can go back and represent what it did in the good old days, we will have to wait and see.”

To be sure, the MTR has its defenders. Many ordinary Hongkongers are infuriated at the transport chaos caused by the attacks on the system, and the protesters have lost some support as a result.

“I think it’s disrespectful to Hong Kong people,” said a 35-year-old woman who asked to be identified as Ms. Chan. “Maybe it’s not home, or work, they need to get to. Maybe it’s some sort of emergency that cannot wait. Have the protestors ever considered that? What they’re doing is selfish and affects every single Hongkonger. I think if they keep doing this, they will start to lose public support. They’ve already lost mine.”

“I feel sorry for the MTR staff and the cleaners who have to pick up after the protesters,” adds Jack, 32. “I think the protestors are simply venting their anger. This is not the Hong Kong I grew up in.”

However, others, even some who work for the MTR, believe the vandalism is justified. A senior supervisor at the rail service, who spoke to TIME on condition of anonymity, says she has observed a higher level of cooperation between the management and police in recent weeks.

“If we just keep doing our job well, transporting people to where they would like to go, no one would be destroying our facilities,” she says. “We deserve it.” 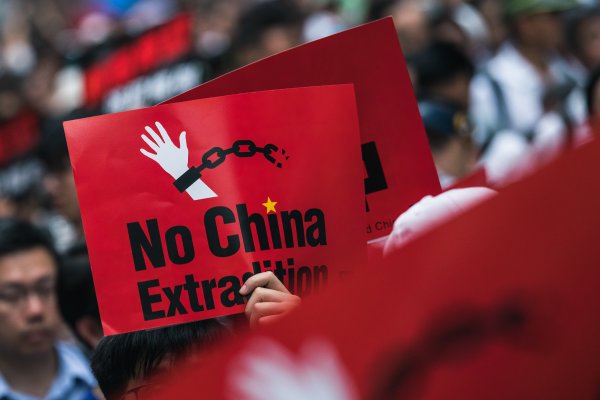