For years, Chanel Miller was known to the public as “Emily Doe”—the anonymous voice of a victim impact statement detailing how she was sexually assaulted in 2015 by former Stanford student Brock Turner. In September, Miller reclaimed her identity in a gripping memoir Know My Name, which shot her to national attention.

“I sleep better because I don’t have to keep everything contained,” she said Thursday at the TIME 100 Next event. “Everything was so suppressed for so long it really inhibited my ability to get help.” Miller doesn’t even want to “sleep as much anymore” because she’s “spending more time doing the things” that she loves, she said.

Miller was one of the honorees on the 2019 TIME 100 Next list, which is dedicated to celebrating the leaders of tomorrow.

Miller’s victim impact statement was first published anonymously in its entirety on Buzzfeed in 2016 and quickly went viral. “You don’t know me, but you’ve been inside me, and that’s why we’re here today,” her statement began. Turner served only three months in jail.

This month, two plaques quoting Miller’s victim impact statement appeared in the location where Miller was sexually assaulted, the Stanford Daily reported. “You took away my worth, my privacy, my energy, my time, my safety, my intimacy, my confidence, my own voice — until today,” they state.

“The students are incredible. I’m so impressed by them,” she said Thursday, because they dare to say “we will reshape history” and “we will not let her disappear into the abyss.”

Miller says the letters she has received from strangers have helped her “reshape traumatic memories and objects in a way so they can now represent support and warmth.” In her court statement, she had described pine needles “scratching the back of (her) neck” and combing them out of her hair. One woman sent her a “beautiful photo she had taken of pine trees with sunlight shining through them,” Miller said. The woman told her, “I want the pine needles to be yours, not something that’s been taken from you.”

Next on Miller’s agenda is working on graphic novels for middle school age students, kids books, animation — “anything you can think of that involves visual narrative.” She says coming public about her sexual assault has forced her to “be more serious because this is a serious topic” but she still wants to pursue “more wild and creative projects.”

Miller embraced another vocal sexual assault survivor at 2019 TIME 100 NEXT: Olympic gold medalist Aly Raisman, who confronted former USA Gymnastics doctor Larry Nassar face-to-face in court with a powerful victim impact statement about the sexual abuse she and dozens of other young women endured. This was the first time they had met. She said meeting Raisman was “incredible” and that she was “honored to be in her presence.”

“I’ve looked up to Aly for so long,” Miller said. “While I was anonymous, I would read her interviews, I would watch how she held herself and how she spoke. I took cues. I continued to question if I would be able to speak as strongly. She helped me.”

Blasey-Ford said in a tribute to Miller that she “embodied courage long before writing her powerfully moving book.”

“As ‘Emily Doe,’ she courageously testified against the man who sexually assaulted her and read her victim-impact statement in court, looking right at him,” Blasey-Ford said. 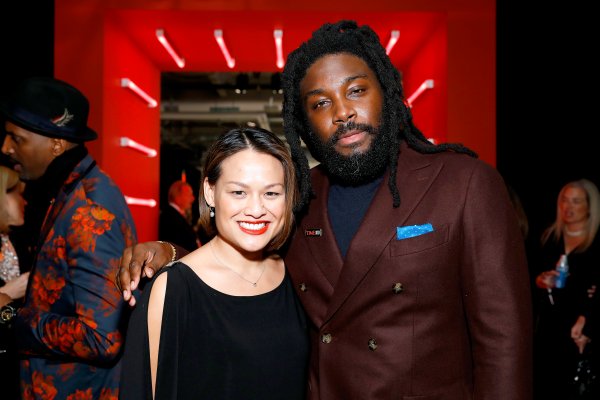 Behold, Your Preview of How Jason Reynolds' Upcoming Book Will Flip the Script on History
Next Up: Editor's Pick