History often seems inexorable in hindsight, shaped by powerful figures operating beyond our control. But when Dr. Christine Blasey Ford walked in to face the Senate Judiciary Committee on Sept. 27, raised her right hand and swore to tell the truth, it was clear that an unassuming psychology professor and mother of two was about to change the course of current events in real time.

At stake was a potential lifetime appointment to the Supreme Court that could change decades of legal rulings and affect the nation’s faith in its judiciary. Control of Congress may have hung in the balance, too, as Senators prepared to assess Ford’s allegation that Judge Brett Kavanaugh had sexually assaulted her some 36 years ago, a charge he vigorously denies. Most of all, the hopes and fears of women and men who have lived with the trauma of sexual violence were riding on the credibility of Ford’s testimony. Her treatment in the halls of power, and her reception by an expectant public, would send a signal to countless survivors wrestling with whether they should speak up.

So the country was riveted even before the figure known only from a faded photograph finally arrived on Capitol Hill, faced a towering dais of Senators and began to talk. “I am here today not because I want to be,” Ford said. “I am terrified.” For the next four hours, she answered every question. She admitted the facts she could not remember and recited her memories of that summer night in excruciating detail. The floor plan of the house. The ambush on her way to the bathroom. The sound of the two boys laughing as Kavanaugh allegedly pinned her to the bed, fumbled to remove her clothes and covered her mouth when she tried to scream. When pressed on her recollections, Ford explained how norepinephrine and epinephrine encodes in the hippocampus, her word choice reminding listeners of her Ph.D. in psychology. And when asked how sure she was that it was Kavanaugh who attacked her, Ford did not hesitate. “One hundred percent,” she said.

By the time the hearing ended, Ford had done more than prove herself a credible witness. For millions of women and men, she had replaced Kavanaugh as the protagonist in the nomination narrative. Women began calling into C-SPAN to tell their own, decades-old stories of harassment and rape. The hashtag #WhyIDidntReport exploded on social media, a rallying cry for those who had never gone public about their own sexual assault until then. Overseas, young women from San José to London gathered around smartphones and computers to watch the testimony, hands over hearts, mouths agape. In Lyon, a real estate agent rushed home from work to catch the live stream on YouTube. In Hong Kong, a young woman posted a photo in solidarity: “I Believe Christine Blasey Ford.”

Ford’s testimony slowed the machinery of political power when it was fully in gear. Republican Senator Chuck Grassley, the chairman of the Judiciary Committee, congratulated Ford on her bravery. President Trump, rarely one to give credence to the claims of female accusers, called Ford “a very fine woman” and a “credible witness,” and deemed her testimony “compelling.” Within hours, three Republican governors and the American Bar Association had called for a delay on Kavanaugh’s confirmation vote until there could be a thorough investigation. The prominent Catholic magazine America withdrew its support for the nominee. An NPR/PBS NewsHour/Marist poll released Oct. 3 found that 45% of respondents thought Ford was telling the truth, compared to 33% who believed Kavanaugh. That’s a marked shift from 1991, when Americans sided with then Supreme Court nominee Clarence Thomas after Anita Hill accused him of sexual harassment.

The facts remain unsettled, and Ford’s testimony may not prevent Kavanaugh’s confirmation. But it was a powerful warning that wealth, status and a record of professional accomplishments were no longer enough to override credible allegations of sexual assault, no matter when they occurred. To young men, it was a message that drunken violence could shadow them all their lives. And to victims, Ford’s testimony was an invitation to speak up, no matter how powerful the accused, no matter how long ago the attack. People will listen, the country seemed to reassure them. We will believe you.

Kavanaugh testified, too, of course, and with a vehemence that read as a Rorschach: where accusers saw intemperance, supporters saw justified outrage. The nominee had reclaimed the spotlight, and Republicans clamored for a quick vote. But the following day, before the vote could be held, two women confronted Republican Senator Jeff Flake, one of a handful of swing votes, in an elevator. One of them, Ana Maria Archila, had recognized herself in Ford. She too had remained silent about a sexual assault more than 30 years ago. It took her a decade to tell her mother; her father only learned of the incident, she told TIME, when she buttonholed Flake on live television. “This is not tolerable,” Archila told Flake, her voice heavy with emotion. “You have children in your family. Think about them.”

Within a few hours, Flake had a change of heart. While he said the elevator encounter wasn’t the sole reason, he announced he would only support Kavanaugh after another FBI investigation. The resulting probe, which included another allegation of sexual misconduct from a college classmate, slowed Kavanaugh’s nomination and launched a new round of partisan fighting. White House counsel Don McGahn, one of the key supporters of Kavanaugh’s nomination, reportedly was involved in approving witnesses for FBI agents to interview; several people who said they had information about Kavanaugh told reporters the FBI didn’t call them back.

As Ford galvanized sexual-assault survivors, the nominee’s defenders cast him as the victim. “This could happen to any male who has been in a room with a woman alone because the story has not been corroborated,” says Victoria Belk of Liberty University, who spoke recently at pro-Kavanaugh rally. “Any woman can ruin a man’s life.” John Cornyn of Texas, the second highest-ranking Senate Republican, said everyone should be able to sympathize with Kavanaugh. “Every female’s got a father, some have a husband, some have a son,” he told TIME. “I would think they would want those people treated fairly just like we want Dr. Ford treated fairly.”

Some Republican analysts see the confirmation battle as a winning issue for a party keen to drive its base to the polls in a difficult election year. The National Republican Congressional Committee saw its donations spike by 175%, compared with a week earlier, according to Politico. But Meghan Milloy, co-founder of Republican Women for Progress, says the GOP isn’t paying enough attention to the reaction among women. Among white women with college degrees–a demographic with whom Republicans are struggling–61% believed Ford was telling the truth, according to Quinnipiac. Overall, the survey indicated women oppose Kavanaugh’s confirmation 55% to 37%, while men support it 49% to 40%.

For many, like Jen Pollock Michel, an evangelical writer, the hearings stirred complicated questions. She is a social conservative, but Ford’s testimony made her cry. “As a woman, it’s hard not to say that doesn’t feel credible or believable because I know a thousand stories like it,” she says. Sharlee Mullins Glenn, a founder of Mormon Women for Ethical Government, also described misgivings. Some in her community want to see a conservative Justice, but if Kavanaugh were innocent, why did he evade Senators’ questions about calling for a complete investigation? “It raises a red flag,” she told TIME.

Republicans’ restrained treatment of Ford did not last long. While some GOP Senators privately whispered that they still found her credible, others dismissed her “mixed up” memories in fiery public remarks. By Oct. 2, Trump, always attuned to the moods of his base, had scrapped his measured comments and mocked Ford at a Mississippi campaign rally, mimicking her inability to remember the exact location of the house or which day the attack allegedly took place. The prospect that Kavanaugh’s nomination could fail because of a decades-old allegation is “very dangerous for our country,” he warned. In 2016, when Trump was facing several sexual-misconduct allegations, 62% thought such allegations were not a deal breaker. The nation might agree: two-thirds of voters thought Ford’s allegations, even if they were true, were not necessarily enough to force Kavanaugh to withdraw from consideration, according to Quinnipiac.

But even if Kavanaugh joins the bench, Ford has cemented herself as a historic figure. In her courage, many Americans saw the opposite of everything they think is wrong with Washington. Politicians spin, fudge the truth, grasp at power. Ford appeared guileless.

When she spoke with the Washington Post in September, she described her reluctance to go public, given the likelihood that Kavanaugh would be confirmed anyway. “Why suffer through the annihilation if it’s not going to matter?” she asked. Indeed, the backlash she and her family endured was worse than she thought. They have been driven from their home, bullied by death threats and forced to hire private security guards. Critics have smeared her as a two-bit political operative and sneered at her sexual history. Her name, even in the best circumstances, will forever be associated with the darkest moment of her life.

Yet she chose to speak up anyway, out of what she saw as civic duty. That kind of courage is rare, especially in Washington today. And Ford showed how powerful it can be. 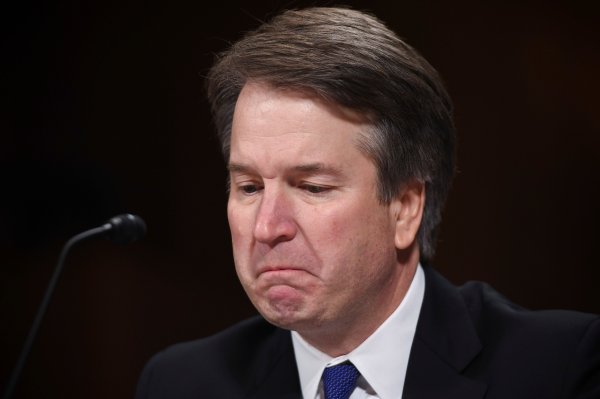 Brutal Confirmation Could Shape Brett Kavanaugh on the Supreme Court
Next Up: Editor's Pick