Mouse-Like Deer Just Photographed After It Vanished for 25 Years. Here's What You Need to Know

An unusually tiny deer has been found in Vietnam. Researchers say it’s the first sighting of the rare silver-backed chevrotain in nearly three decades.

At less than 10 pounds, the chevrotain, which the Global Wildlife Conservation (GWC) also dubbed a “miniature fanged deer,” is the size of a rabbit. Also called the Vietnamese mouse-deer, chevrotains are actually neither deer nor mice, but they’re the smallest ungulates — or hoofed mammals — in the world, according to the GWC.

It’s been a long while since this mammal has been seen in real life. Its last sighting was in 1990 in Vietnam, according to the GWC. The organization, which is dedicated to conserving animals and habitats worldwide, worked with the Southern Institute of Ecology in Vietnam and the Leibniz Institute for Zoo and Wildlife Research for the research, which was published in the Nature Ecology and Evolution scientific journal on Monday. The expedition is part of a “global push to locate species that haven’t been sighted in recent years,” explains Andrew Tilker, one of the paper’s co-authors. So finding an animal that hasn’t been seen in nearly three decades was a top priority.

Believed to be “lost to science,” Tilker says, the chevrotain is the first animal rediscovered from GWC’s top 25 most wanted lost species list.

Why is this discovery so important?

When the animal was recorded in 1990, it wasn’t even found alive. A Vietnamese and Russian expedition acquired a chevrotain that was already hunted, and that 1990 discovery was only the fifth chevrotain ever recorded, according to the report.

That’s what makes this discovery of living chevrotains that much more exciting for the conservation community. “For so long this species has seemingly only existed as part of our imagination,” An Nguyen, one of the expedition’s leaders and an associate conservation scientist for GWC, said in a press release. “We’re moving quickly now to figure out how best to protect it.”

How did they find the mouse-deer?

“They put them in the forest, kind of opportunistically,” hoping to find them, Tilker explains. Over the course of a few months, it paid off when the team caught a few hundred photos of the silver-backed chevrotain. Then, over five more months, they caught more than 1,000 photographs from 29 cameras.

What threatens this species?

“This is an area that’s under immense pressure for habitat loss and poaching,” Tilker says about why this animal was a priority among the others on the top 25 most wanted list.

Habitat loss, mainly in the form of deforestation, is only partially responsible for the decline of the species, which was first discovered in 1910 in Nha Trang, Vietnam.

While experts have yet to get specific information about the biggest danger facing rare chevrotains, the team has a pretty good idea. Tilker says the environmental issues are a “distant second” to the creature’s real threat: illegal hunting. “Mainland southeast Asia is in the midst of a snaring crisis right now,” he says.

Snaring is hunting with a wire that can catch animals by the neck in the wild. The chevrotain’s “behavioral irregularities,” including its diet of fallen fruit and confinement to the ground, make it further susceptible to snaring, according to a 2004 report.

This widespread hunting has led to “empty forest syndrome” in Asia — the sobering idea that eventually, hundreds of forests could be devoid of all natural wildlife.

But the tiny, essentially unknown deer-like animal is just one example, which Tilker says it comes down to status. “People set snares in the forest largely, almost exclusively, to supply the thriving illegal wildlife trade,” Tilker says. Hunters then illegally sell animals — chevrotain included — to local restaurants and markets, because “bush meat in Vietnam is seen as something of a status symbol,” he explains.

Are there others out there?

While researchers have no idea how many of these chevrotain remain, Tilker says this discovery suggests there are others roaming around in Vietnam. There is this one confirmed population, and another area where locals have reported some sightings. But, “beyond that, we really have no idea,” he admits.

Naturally, they’re embarking to find out. The team will survey the creatures with cameras in two more areas to create a “conservation action plan” in the hopes of keeping chevrotains in existence. 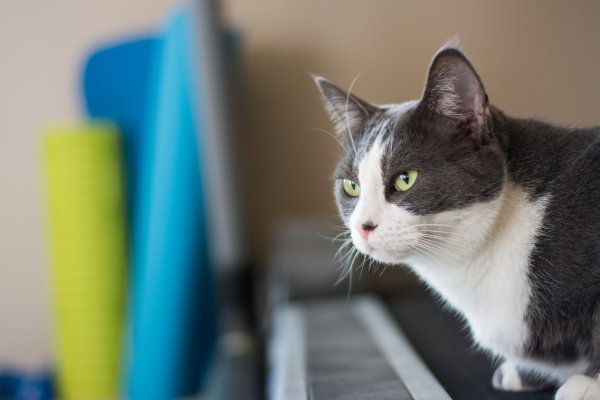 Cinderblock the Cat's Workout Level Intensity Is Basically Zero and People Are Just Lapping It Up
Next Up: Editor's Pick