18 Killed as Hundreds of Thousands of Protestors Take to the Streets in Chile. Here’s What to Know

For the past week, the streets of Chile’s capital, Santiago have resounded with the sound of banging metal pots, the rallying call of more than 400,000 protesters taking part in demonstrations across the country. Protesters clashed with police firing rubber bullets, tear gas and water cannons to disperse crowds.

The demonstrations, which began on Oct. 18 in defiance over an increase in subway fares, have spilled over into their eighth day. Chilean truck and taxi drivers on Friday brought gridlock to Santiago’s highways in protest against high road tolls, Reuters reports.

In an attempt to calm the protests, Chile’s President made a televised apology for his government’s failure to respond to long-standing frustrations. But the apology hasn’t quelled the protests, which have so far led to at least 18 deaths. This the most violent unrest Chile has witnessed since the end of Augusto Pinochet’s dictatorship in 1990. Here’s what to know.

Demonstrators display flags and banners during a protest against President Sebastian Piñera on Oct. 21, 2019 in Santiago, Chile, as protests continue into eighth day.
Marcelo Hernandez

The unrest was triggered by an increase in subway fares of 4% in Santiago. In response, high school pupils and university students jumped over ticket barriers to evade paying the increased fares. The local police took action and confronted the students in metro stations and violent clashes ensued.

The young protesters, who are also experiencing the strain of an underfunded education system, were joined in a mass demonstrations by many other Chileans who are frustrated with rising living costs, low wages and one of the worst rates of inequality in Latin America. Protesters across the country, including striking workers and trade unions, continued to defy the government’s curfews to pour on to the streets for the eighth day.

But, the demonstrations against the government quickly turned violent in some areas of Chile, with some masked protesters throwing rocks at police, arson and lighting barricades, and looting.

A man uses a slingshot to throw a projectile on Oct. 24, 2019 in Santiago, Chile.
Marcelo Hernandez

The proposed subway fare hike was scrapped two days after the protests started and Chile’s President Sebastian Piñera announced social reforms, including an increase in the minimum wage, but demonstrations continued.

Amid the anti-government unrest in Venezuela and Brazil, Chile has been a good-news story for Latin America, with a stable economy. The World Bank describes the country’s economy as “one of Latin America’s fastest-growing economies in recent decades”, due to its solid macroeconomic framework. But this prosperity has fallen into the hands of a lucky few, as Chile has the highest rate of income inequality among a group of 35 of the world’s wealthiest nations. The country suffers from large pay gaps between men and women and low levels of employment for women, youth and low-skilled groups, according to a 2018 OECD report. With one of the highest rates of economic inequality in the region, in Santiago, Chile’s capital, luxury apartments and private schools and hospitals sit close to overcrowded schools, underfunded public schools and shantytowns.

The protesters are frustrated and demanding significant change to living standards, poor quality health care and education, and how the country is governed, with some demanding the president resigns.

18 people have been killed and thousands arrested

Since the protests erupted, at least 18 civilians have been killed, according to officials. The military and Chile’s national police force, known as the Carabineros, are currently detaining 2,840 people across the country — 305 of whom are children and teenagers — and 584 people have been injured, Chile’s human rights commission, INDH, reported.

Protester is arrested by armed police in Santiago, Chile on Oct. 20, 2019
Marcelo Hernandez

The INDH confirmed it has compiled 67 legal cases against both police and military agents, related to five homicides and 12 complaints of alleged sexual violence, including stripping and threats of rape and touching. The cases will be investigated by Chile’s public prosecution service.

The organization has also recorded reports of torture, shooting at civilians, verbal and physical abuse including beatings, as well as police delaying driving detainees to the police station, leaving them in overcrowded vans for hours with poor ventilation.

Aerial view of demonstrators during the fifth straight day of protests against a now suspended hike in metro ticket prices in Valparaiso Chile, on Oct. 22, 2019.
Javier Torres—AFP

The protests have prompted the UN High Commissioner and former Chilean president, Michelle Bachelet to take action and send a team to Chile to investigate allegations of human rights abuses against demonstrators.

“Having monitored the crisis in Chile since it began, I have decided to send a verification mission to examine the allegations of human rights violations,” Bachelet announced on Twitter on Oct. 24. Earlier in the week on Oct. 21, Bachelet said: “I’m deeply disturbed and saddened to see violence, destruction, deaths and injuries in Chile”.

Chile’s right-wing president, Sebastián Piñera, has come under intense criticism after he announced, on television, that Chile was “at war with a violent enemy”. The government declared a state of emergency on Oct. 19, and set curfews in the country’s largest cities.

On Oct 23, Piñera, apologized for the government’s “lack of vision”. “We humbly accept legitimate social demands and messages that Chileans have delivered,” he said. “It is true that problems were accumulating for decades and the different governments were not able to recognize the situation in all its magnitude. I recognize and apologize for that lack of vision.”

Pinera has since pledged to introduce social reforms, including increasing the basic pension by 20% as well as the minimum wage — but the reforms haven’t quelled anger among Chileans as thousands have again taken to the streets to protest.

How does this demonstration fit in with Chile’s history of protests?

Students have been pivotal in forming mass demonstrations in the past. Violent protests, albeit on a smaller scale, erupted in Chile in 2016 after students called for education reforms. Police deployed tear gas and water cannons to disperse the crowds of demonstrators.

Riot police arrest a student during a march held to protest the slow pace of educational reform, in Santiago, on May 26, 2016
Claudio Reyes—AFP

Similarly, in 2017, thousands of students returned to the streets to march across the country to demand improvements to the nation’s higher education system. The students argued that the then President Michelle Bachelet had not improved access to higher education or its quality.

This week’s protests are larger and have spread across the country, with many Chileans joining the protest over general fears over inequality and living standards. 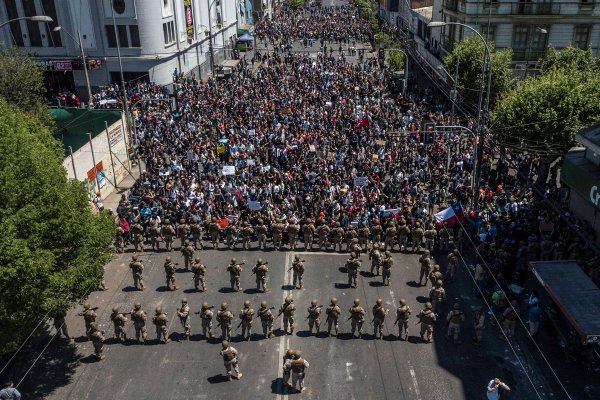 Chile's Protest Reflect Our Unequal Times
Next Up: Editor's Pick