The Senate Will Reject the Green New Deal. But It's Already Changing the Debate on Climate Change

The Green New Deal will go down to defeat in a Senate vote Tuesday afternoon. But the push for the Congressional resolution has already changed the conversation on climate change in Washington and forced a discussion on the issue.

In response, most if not all Democrats decided as a group to vote “present” on the resolution, essentially ducking the issue.

But the show vote aside, there are signs that the Green New Deal has helped forced a discussion on climate change on Capitol Hill, even among Republicans, who have been a major obstacle to legislation in recent years.

On Monday, Republican Sen. Lamar Alexander of Tennessee took to the Senate floor to call for a different solution to the risks of rising global temperatures. Instead of a version of the Green New Deal, he proposed what he called a New Manhattan Project, including doubling federal funding on energy research, greener buildings and the deployment of solar power.

“I believe climate change is real,” he said.

That line stands in stark contrast to President Donald Trump, who repeatedly called climate change a hoax before becoming president and has worked to undo Obama-era programs to address the issue.

Other Republicans have also begun to challenge the Trump’s denial of the science of global warming: Texas Sen. John Cornyn of Texas tweeting positively about a carbon tax; South Carolina Sen. Lindsey Graham and Colorado Sen. Cory Gardner starting a working group to talk about conservative approaches to environmental issues; even Republican Rep. Matt Gaetz, a close ally of Trump, has said he will draft a “Green Real Deal” to offer conservative solutions to climate change.

“During the last month this chamber has been the forum for debate of a topic I never thought I would see Republicans raise on their own: climate change,” Senate Minority Leader Chuck Schumer said on the Senate floor Monday, mocking McConnell’s legislative maneuver. “Republicans owe the American people some real answers.”

Those answers are likely to be less progressive than the Green New Deal, which calls for a rapid decarbonization of the U.S. economy as well as universal health care, a job guarantee and a slew of other solutions to tackle social ills. And indeed most of the early ideas from Republicans fall short of the ambitious scale needed to stave off the worst effects of climate change.

But while the unveiling of the outlines of a potential Green New Deal — no bill has actually been written — drew attention in February, some Democratic strategists say the program is too far to the left to make it out of Congress and onto the next president’s desk.

The activists who have spent the better part of the last year pushing for a Green New Deal remain adamant that the program is the best way to address climate change. But, at the same time, many progressives, including Democratic Rep. Alexandria Ocasio-Cortez of New York, the resolution’s sponsor in the House, recognize that the program’s significance extends beyond any particular policy plank.

In an interview with TIME, Ocasio-Cortez expressed frustration with critics who have picked apart the resolution.

“There’s this obsession with perfectionism: ‘What about Clause 2a?'” she says. The Green New Deal, she acknowledged, isn’t intended to be passed into law and in fact as a resolution it can’t be. “I introduced a resolution. It’s not even a bill,” she says. “It’s a statement. It’s a vision document.”

Democrats — who long have acknowledged the threat of climate change while ranking the issue low on the list of priorities — have also been jolted into action by the Green New Deal.

Schumer, who for years largely remained silent on the issue, has delivered several speeches on the topic in recent weeks. Democratic Sen. Chris Van Hollen of Maryland said last week he planned to endorse the Green New Deal while also introducing “cap and dividend” legislation, according to E&E News. And several signatories to the Green New Deal have also endorsed the growing push for a carbon tax. In the presidential race, the Green New Deal conversation has forced candidates to talk about climate change even though the issue hasn’t been a top priority for most of the candidates.

The Green New Deal’s likely failure in the Senate Tuesday is definitely a set back, but in the long term its defeat will likely be a footnote about the bigger discussion it started.

The original version of this story misstated what state Sen. Chris Van Hollen represents. He is a senator from Maryland, not Connecticut. 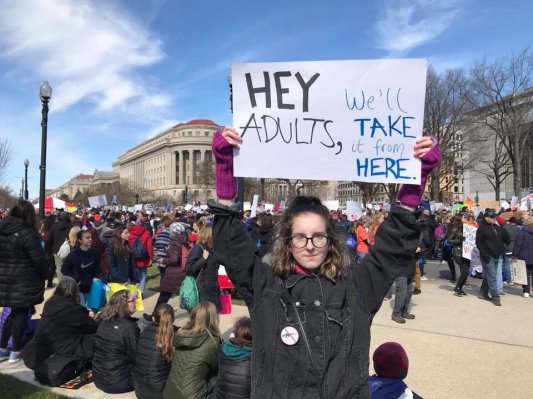 'It Will Be Too Late for My Generation.' Meet the Young People Organizing a Massive Climate Change Protest
Next Up: Editor's Pick