'Anything That Moves the Ball Forward.' Some Green New Deal Supporters Back Carbon Tax, Too

But for some Democrats, either one — or even better, both — will do.

A recent proposal for a carbon tax by Democratic Rep. Ted Deutch of Florida and supported by a group called Citizens’ Climate Lobby has attracted more than 50 co-sponsors, including nearly 30 House Democrats who also back the Green New Deal.

“I’m for anything and everything that moves the ball forward,” says Democratic Rep. Salud Carbajal of California, who supports both the Green New Deal and a carbon tax. “What the carbon pricing legislation does is move forward the only significant bipartisan legislation that seems to be out there.”

The Deutch bill would require companies to pay $15 per ton of carbon dioxide they emit, a price that would rise by $10 each year after its been enacted and, according to supporters, reduce emissions by at least 40% in its first 12 years. The federal government would then distribute the revenue money back to American households in monthly payments, an approach known as a “carbon tax and dividend.”

“It’s about as stringent as we’ve seen in terms of a federal carbon tax proposal,” says Noah Kaufman, a researcher at Columbia University’s Center on Global Energy Policy.

Supporters say such an approach could attract appeal across parties. For one thing, a carbon tax is actually a conservative idea and has support from many large corporations as well as economists and influential D.C. think tanks. And some Republican members of Congress have hinted they be willing to come around to the idea.

Importantly, many supporters say the revenue generated by a carbon tax would create a significant lever to attract bipartisan support. Some of the money from a carbon pricing scheme could be used to help fund an industrial transition in communities with economies heavily dependent on fossil fuels. Or the money could help pay down the deficit. “There are lots of ways to spend — our estimate is $2.5 trillion over 10 years,” says Democratic Sen. Chris Coons of Delaware, who plans to introduce his own carbon pricing legislation.

Still, a carbon tax would face a significant uphill battle to become law under any president. The Senate is likely to remain in Republican hands in the near term, and even with a Democratic majority supporters would need to earn a significant number of GOP votes or rely on legislative maneuvers to pass the Senate.

Carbon tax and Green New Deal supporters alike say they expect the political circumstances surrounding global warming to change in the coming years, opening a door that may not seem conceivable today. Recent polling has shown that the vast majority of Americans understand that climate change is happening and a majority of voters in both parties want the government to take action to address it.

“The political debate in the world changes every single day,” says Democratic Rep. Chellie Pingree of Maine, who backs both a carbon tax and the Green New Deal. “The majority of the American public is basically saying, hurry and do something about this.”

Regardless of it chances of passing, members of Congress who support both a carbon tax and the Green New Deal are quick to point out that carbon pricing isn’t a silver bullet no matter what form it takes. Carbon pricing will do little to stop emissions in the transportation sector, which account for nearly a third of U.S. greenhouse gas emissions, and some fear that consumers might end up spending whatever dividend they receive on higher energy costs.

Nonetheless, carbon tax supporters say putting a price on carbon could serve as tool in the toolbox for to reach many of the aspirations of the Green New Deal. In the presidential race, Washington Gov. Jay Inslee has embraced that approach. The long-shot contender who has built his entire campaign around climate change has released more than 100 pages of plans to tackle climate change, but he has devoted only a handful of sentences to what he calls a “climate pollution fee.” Others, like South Bend, Ind., Mayor Pete Buttigieg and former Maryland Rep. John Delaney have both embraced a carbon tax as a central piece of climate policy.

Outside the presidential race, key supporters of the Green New Deal have struck a delicate balance discussing a carbon tax and other methods of carbon pricing. “Instead of simply saying we’re going to cap or put a price on carbon, the Green New Deal says, no, carbon pricing can be a small part of the sort of legislative package,” Sean McElwee of the progressive group Data for Progress told TIME earlier this year. “But we need to do more than that.”

Perhaps the biggest reason why prominent voices on climate change have avoided talking about a carbon tax is a fear that voters simply don’t back the concept — at least not to the same degree that they support other policy ideas. Protests erupted in Paris last year when President Emmanuel Macron tried to impose a gas tax. And with Inslee as governor Washington state twice considered enacting a carbon tax, but voters rejected it on both occasions.

“It’s clear they want a different suite of solutions other than that particular carbon tax,” he told TIME earlier this year.

However the rhetoric plays out, supporters of the carbon tax bill say it is just a matter of time before the idea breaks through to the forefront of climate discussions again. Across the globe, from the United Nations’ climate science body to the leaders of the world’s biggest economies, carbon pricing is seen as a fundamental element of the fight against climate change.

“Everyone’s goal is to work to reshape our economy so that we’re not reliant on carbon fuels and the pollution that comes with it,” says Deutch. Carbon pricing “will reemerge when we get down to the finer points of how we’re going to achieve everything that the presidential candidates are rightly talking.” 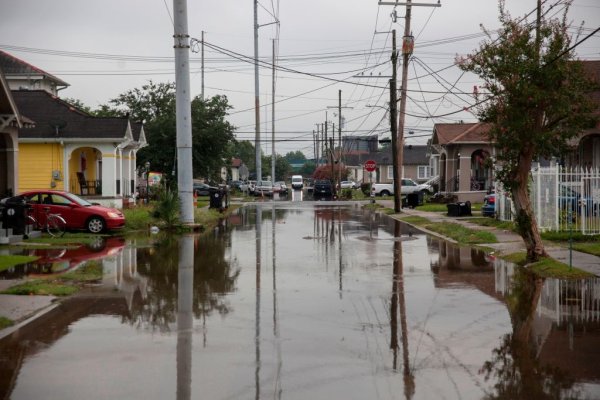