Rodney Reed, a death row inmate in Livingston, Texas, who was scheduled to be executed by lethal injection on Nov. 20 will have his execution stayed by the Texas Court of Criminal Appeals, his lawyer Bryce Benjet confirms to TIME.

“We are extremely relieved and thankful that the Texas Court of Criminal Appeals has issued a stay of execution for our client Rodney Reed,” Benjet says in a statement to TIME. “This opportunity will allow for proper consideration of the powerful and mounting new evidence of Mr. Reed’s innocence.”

In recent weeks, his case has received widespread attention and a wave of support from celebrities, activists and lawmakers who are calling on the state to stop the execution.

Earlier on Friday, the Texas Board of Paroles and Pardons had said that they were recommending that the execution be delayed 120 days.

In 1996, Reed, 51, was found guilty of the abduction, rape and murder of 19-year-old Stacey Stites in Bastrop, Texas. He has always maintained his innocence. And according to his lawyer Bryce Benjet, who has been working on Reed’s case for 18 years, there’s evidence and witness statements that clear Reed.

Reed, who is black, was found guilty by an all-white jury.

“I don’t think you can ignore the role that racism plays in our criminal justice system,” Benjet tells TIME. “In a rural part of Texas the accusation of a black man raping a white woman is essentially a charge,” he argues.

A petition on freerodneyreed.com has over 2 million signatures, while another 300,000 people have signed a Change.org petition in support of Reed. “We need to persuade Governor Greg Abbott, the Board of Pardons and Paroles, the Bastrop County District Attorney Bryan Goertz, and other conservative elected officials to stay this execution,” a statement on freerodneyreed.com reads, “[and to] review all of the evidence that exonerates Rodney, and eventually grant him a new trial.”

What happened in Rodney Reed’s case?

In 1996, Stacey Stites was living with her fiance Jimmy Fennell, a Bastrop police officer. Stites was working at a grocery store thirty miles away from her home; she was scheduled to work a 3:30 a.m. shift on April 22. When she did not show up, a co-worker alerted the police.

Her body was found later that same day on the side of a road. She had been raped and strangled.

Reed did not become a person of interest in the investigation until the following year, when police identified DNA found on Stites’ body as his. At this time, he had been arrested and charged with the kidnapping, beating and attempted rape and murder of another woman, Linda Schlueter. (This attack happened about six months after Stites was killed.)

Because of the similarities between Schlueter’s and Stites’ cases, the police began investigating Reed in the latter. Police already had Reed’s DNA on file from another alleged rape, and matched it to DNA found on Stites’ body. Reed was not prosecuted in either of these other two attempted rape cases.

Reed has maintained that he and Stites had a consensual sexual relationship, and that they were together the day before she went missing.

During his trial, prosecutors used the DNA match as evidence against Reed. They also portrayed Stites and Fennell as a happy couple getting ready to be married.

Reed’s defense team attempted to draw the jury’s attention to other potential suspects, including Fennell (who police had originally focused on as a person of interest) and noted that hair found on Stites’ body did not match Reed’s.

Still, the jury found him guilty.

The State’s call for capital punishment was due to past allegations against Reed, who had been considered a suspect in attacks on six women (including Schlueter). But he was only charged in one of those cases — and was later acquitted. Having heard those allegations, though unconfirmed, the jury also approved Reed’s death sentence.

Benjet says that Reed continues to deny all the sexual assault and rape allegations made against him.

What new evidence has been found in the case?

According to Reed’s legal team, the prosecution’s case was flawed. Problematic examples they cite in the evidence compiled against Reed include that the murder weapon — a belt used to strangle Stites — has never been tested for DNA evidence. According to the Innocence Project, an organization that works to exonerate wrongly convicted felons through DNA testing and criminal justice reforms, repeated requests for DNA testing of the murder weapon have been denied by the Texas Court of Criminal Appeals.

The Texas Court of Criminal Appeals did not respond to TIME’s request for comment.

Forensic scientists on Reed’s legal team also dispute the timeline prosecutors laid out for Stites’ murder. They argue Stites was killed hours before authorities were notified of her disappearance, and not in the two-hour window that the prosecution alleged — a discrepancy which could mean Stites was actually killed before she had left for work.

Forensic experts called upon during Reed’s original trial have since admitted in affidavits that the original time of death recorded for Stites is not necessarily accurate.

“[These] state’s witnesses have retracted all of their positions,” Benjet says.

Sandra Reed, the mother of death row inmate Rodney Reed, shows her continued support of her son by carrying this placard around the parking lot during a break in a hearing in Bastrop County District Court on Tuesday, October 10. 2017.
Ralph Barrera—AP

In 2007, Jimmy Fennell was accused of rape by a woman he detained while working as a police officer in Georgetown, Texas. According to his attorney, Robert Phillips, Fennell pleaded guilty to a lesser charge of kidnapping and improper sexual activity with the woman, while she was in police custody. He was sentenced to 10 years in prison. He was released in March 2018.

It was during this prison sentence that Fennell allegedly confessed to killing Stites. According to an affidavit filed by Arthur Snow, a member of the Aryan Brotherhood who was in prison with Fennell, he confessed to murdering his fiancee because of her alleged affair with Reed.

According to Snow’s affidavit, Fennell said, “I had to kill my n****r-loving fiance.”

Other witnesses have given signed affidavits implicating Fennell in the murder. One is from a former Sheriff’s Deputy, Jim Clampit, who attended Stites’ funeral. During the funeral, Clampit said that Fennell allegedly looked at Stites’ body and said “you got what you deserved.”

And Charles Fletcher, who was at the time an officer with the Bastrop County police and a friend of both Fennell and Stites, said that before her murder, Fennell had told him that he believed Stites was having an affair with a black man.

“These are people who have no incentive to lie,” Benjet argues.

Phillips, however, says that his client is innocent and that these new claims from witnesses are “utterly laughable.”

“The evidence [provided at Reed’s trial was] as overwhelming as you could ever want it to be if you were a prosecutor,” Phillips tells TIME.

He questions why people are deciding to come forward now. “If you look carefully at each one of the witnesses, you’ll find reasons to doubt the veracity of each story,” Phillips says. “Where has their tender consciences been for the past 20 years?”

How have people tried to stop Reed’s execution?

Benjet and the rest of Reed’s legal team filed their latest appeal on Nov. 12 to the Texas Court of Appeals, with the aforementioned affidavits as well as witnesses who refute the prior portrayal of Stites and Fennell as a “happy couple.” One of the witnesses also recalls Stites telling her that she and Reed were having an affair.

Phillips dismisses the idea that Reed and Stites had an affair, as prosecutors did during Reed’s trial.

On Nov. 6, 26 lawmakers in Texas had written a letter to Texas Gov. Greg Abbott and the Texas Board of Pardons and Paroles asking them to put a hold on Reed’s execution so that the new evidence and witness statements could be reviewed. “We appreciate how difficult decisions like this are and know how seriously you take them, but this is also an opportunity for you to prevent a rush to execution before these new leads are properly explored,” the letter says.

Celebrities like Beyonce, Rihanna, Busta Rhymes, Meek Mill, T.I. and Questlove have been among those lending Reed their support.

Back in October, Kim Kardashian West tweeted at Gov. Abbott asking him to review the “substantial evidence” that suggests Reed he is innocent.

And on Nov. 13, GOP Congressman Michael McCaul sent a letter to Governor Abbott and the Texas Board of Pardons and Paroles asking them to postpone Reed’s execution of Reed until all the evidence is fully evaluated.

“A death sentence is final, and given the doubt surrounding his innocence at this time, I believe our state cannot execute Mr. Reed in good conscience,” the letter said.

What does the Texas Court of Criminal Appeals’ decision mean?

As a result of the decision by the Texas Court of Criminal Appeal (CAA), Reed is granted an indefinite stay of execution.

This means he no longer has a set execution date, while new evidence in the case is reviewed in a trial court.

The CAA’s decision is based on several claims including Brady violations, which allege that the prosecution withheld evidence in favor of Reed. It’s unclear what evidence this is.

The decision also notes the possibility of false testimony having been made, and that reasonable doubt as to Reed’s guilt exists.

Just hours before the Appeals court’s decision, the Texas Board of Pardons and Paroles announced that they recommend Gov. Abbott grant Reed a 120-day reprieve, so that new evidence can be reviewed.

In a statement sent to TIME, the board said that they reviewed Reed’s clemency application and came to a unanimous decision to recommend the delay.

Since Gov. Abbott took office in Jan. 2015, 48 people have been executed in Texas. He has stopped just one execution from taking place. Thomas “Bart” Whitaker, who was convicted of orchestrating the murders of his mother and brother in 2003, was scheduled to be executed on Feb. 22, 2018, but Abbott stopped it just 45 minutes before the 6 p.m. execution time.

Whitaker is currently serving a life sentence without the possibility of parole.

As of Nov. 15, Gov. Abbott has not spoken publicly about Reed’s case.

Benjet says that the support has really helped Reed. “We have hard evidence, scientific evidence and credible people who are all under oath exonerating Rodney,” Benjet says.

“I am innocent in this case. Absolutely innocent,” Reed told NBC Nightly News in a Nov. 6 interview. “I am cautiously optimistic that something good has got to happen.” 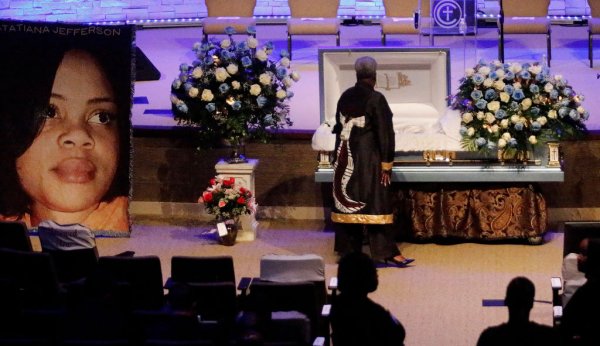