U.S. Attorney General William Barr’s surprise announcement that the federal government would resume executions after more than 15 years included one detail in particular that is troubling many anti-death penalty advocates.

Barr announced last Thursday that the Justice Department will start executing federal death-row inmates for the first time since 2003, bringing back the practice that has been highly criticized and removed from certain states. Seven states have abandoned the death penalty since 2003.

“Congress has expressly authorized the death penalty through legislation adopted by the people’s representatives in both houses of Congress and signed by the President,” Attorney General Barr said in a statement. “The Justice Department upholds the rule of law—and we owe it to the victims and their families to carry forward the sentence imposed by our justice system.”

As opposed to prior executions, which used multiple drugs for lethal injection, federal executions will only use one drug: pentobarbital. Some states have already used the chemical for executions including Texas, Missouri and Georgia.

States started using it for executions in 2011, due to a shortage of sodium thiopental, which was previously used in executions––along with pancuronium bromide and potassium chloride.

Barr’s announcement comes five years after the botched execution of Clayton Lockett in Oklahoma. In 2014, Lockett was injected with a combination of midazolam, vecuronium bromide and potassium chloride. It was an untested blend of chemicals. Appearing to be unconscious, Lockett woke up and thrashed around before dying of a heart attack 43 minutes later. The case brought national attention to the drugs used in lethal injections.

Then-President Barack Obama responded to the public outrage on the incident by calling on Attorney General Eric Holder to review how the death penalty is applied.

Concerns over the effectiveness of multi-drug lethal injections also encouraged states to turn to pentobarbital, according to experts.

“Since 2010, 14 states have used pentobarbital in over 200 executions and federal courts, including the Supreme Court, have repeatedly upheld the use of pentobarbital in executions as consistent with the Eighth Amendment,” the Department of Justice said in a statement announcing the resumption of federal executions.

The first execution dates for the new procedure are set for December for five convicted murderers. There are currently 65 federal prisoners on death row.

Here’s what to know about pentobarbital and why it’s controversial.

Pentobarbital is a sedative that slows the activity of the brain and nervous system. The drug is commonly used to euthanize pets.

There have been 143 executions that were carried out only with pentobarbital, but it’s unclear where the federal government will get it from and how they will administer it.

“Nobody knows if the pentobarbital that the government has obtained will address the serious risks that individuals across the country are facing of being tortured to death through lethal injection,” Sam Spital, the Director of Litigation for the NAACP Legal Defense and Educational Fund tells TIME.

Capital punishment opponents say this is problematic because a bad batch of the drug, or improper use could lead to botched executions that cause pain before death.

Ruth Friedman, the director of the Federal Capital Habeas Project, says the Justice Department was deliberate in not giving details on where they’re getting the drug from or how it will be administered.

Freidman believes it is meant to avoid getting pushback from anti-death penalty groups.

In 2014, Oklahoma used a combination of pentobarbital, potassium chloride and vecuronium bromide to execute convicted murderer Michael Lee Wilson. As the drugs were administered Wilson said, “I feel my whole body burning” before he died.

The new federal guidelines state that only pentobarbital will be used and, according to the DOJ statement, the Supreme Court has upheld the use of this drug in executions.

In April, the Texas Supreme Court allowed the state to protect the identity of their pentobarbital supplier. The Supreme Court in Missouri upheld the use of pentobarbital for death row inmate Russell Bucklew. He is scheduled to be executed on Oct. 1.

Many pharmaceutical companies have stopped supplying drugs to the government for executions, but death penalty opponents say there are ways for the government to find workarounds.

Compounding pharmacies, which are companies that produce mixtures of drugs, are not as heavily regulated as drug manufacturers, and anti-death penalty advocates say that state governments are already using them to get access to drugs for lethal injections.

The DOJ would not comment on where the pentobarbital it plans to use in executions will come from, or how it will be administered.

In Texas, the Woodlands Compounding Pharmacy made the state return pentobarbital that had been purchased for executions after the company’s identity was publicly leaked. Missouri also paid cash for pentobarbital from a compounding pharmacy so there would be no paper trail.

Did the Justice Department go through the correct legal process?

Death penalty opponents are also concerned that Barr’s decision to use pentobarbital in executions did not go through the Administrative Procedures Act (APA), which governs the process of rule making for federal agencies.

“Congress and the public have a right to know what this is about,” Freidman says.

“That is an act that brings transparency and accountability to the rule making process for an agency and here they skipped that process all together,” McCracken says.

Normally, when a federal agency develops or makes changes to regulations, it must go through the APA which allows the public to comment on proposed changes before they are put into place.

There is also a lawsuit pending against the federal government on behalf of some death row inmates that argues the use of lethal injection exposes the inmates to a considerable risk of pain.

While the lawsuit is still under review in the federal D.C. District Court, the five men set to be executed in December were not a part of that lawsuit, so the Justice Department was able to avoid addressing the suit with its announcement.

How will this decision affect the state level?

Support for the death penalty was at a record low in 2016, but has increased slightly since then according to the Pew Research Center. A 2018 survey by Pew found that only 39% of Americans were against the death penalty while 54% were in support of it.

Nationwide, executions slowed down as states struggled to find the drugs for lethal injections. However, they have begun picking up again in some states. Texas has executed three people this year. Last year the state executed 13. Tennessee had three executions in 2018. Florida and Georgia both had two executions in 2018.

“There are many states that have been carrying out executions while the feds have been doing nothing so there’s no direct reason why this should affect any given state for any reason.” McCraken says.

However she also acknowledges that because it’s the federal government, that they could have an “atmospheric affect” on what the states decide to do.

“In so many states the death penalty is a broken system and it is just as broken in the federal government. So you have problems of race and innocence and the most vulnerable people ending up on death row,” McCraken says. “It shouldn’t be a situation where the feds are held up as leaders.” 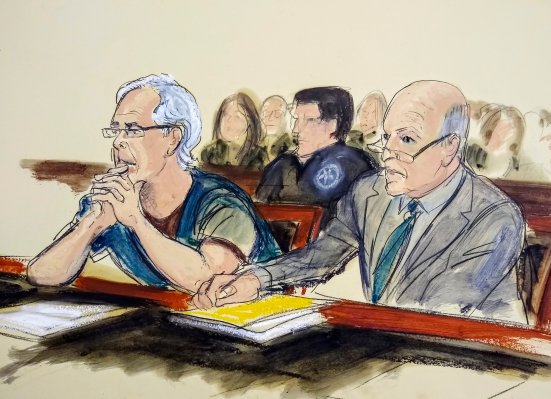 Jeffrey Epstein Ordered Held Without Bail as He Awaits Trial on Sex Trafficking Charges
Next Up: Editor's Pick