9 U.S. Citizens, Including 6 Children, Were Killed in an Ambush in Mexico. Here's What We Know So Far

By Jasmine Aguilera and Madeleine Carlisle

The killing of nine U.S. citizens—six children and three women—from a Mormon community in northern Mexico has caused outrage on both sides of the border.

Five other children were wounded, according to the U.S. State Department, and were taken across the border in Phoenix, Ariz. The Associated Press reports that eight children, including multiple infants, survived.

Mexican officials say a drug cartel was behind the attack, though it’s not clear whether the family members were the intended targets or the victims of mistaken identity.

Here’s what we know so far about the attack.

What do we know about the attack?

TV grab from a video published by Lebaron's family on social media showing a burnt vehicle that was carrying three women and six children from an American Mormon family near Rancho de la Mora, in the boundaries of Sonora and Chihuahua states, northern Mexico, on Nov. 4, 2019.
HO/AFP via Getty Images

The women and children—who were U.S. citizens—were traveling from Bavispe in the state of Sonora, Mexico—about 70 miles south of Douglas, Ariz.— to Janos, Chihuahua on Monday night in three separate vehicles. The AP reports they were headed to visit family, and one woman was picking up her husband from the airport. In a mountain range at the state line, authorities say they were ambushed by attackers who opened fire on their vehicles and set them on fire.

The first vehicle was driving ahead of the other two, and was attacked and set on fire before the other two vehicles were attacked.

Mexican authorities said that the attackers might have misidentified the vehicle as belonging to a rival cartel. The region has been in dispute between rival gangs La Linea in Chihuahua and Salazar in Sonora. Mexico’s army chief of staff Hector Mendoza told reporters Wednesday morning that it is assumed the women and children drove into a fight between the gangs, and the government believes this wasn’t a targeted attack because children in the third vehicle were let go by the attackers. Mendoza also added that the weapons used were American.

Mexican officials say the family often drove the route they were on between their home in Bavispe and Janos.

Video shared on Facebook shows one of the SUVs riddled with bullet holes and still smoldering. A man’s voice can be heard saying, “This is for the record. Nita and four of my grandchildren are burnt and shot up.”

Per The AP, one mother reportedly put her baby on the floor of the car and got out, possibly to draw the gunmen’s attention away from the vehicle. Her body was found about 15 yards away from the car.

The AP reports that 50 or 60 Sinaloa cartel members eventually arrived after the first car was shot and set ablaze.

A relative of the family named Julián LeBarón contacted the Mexican national guard for help, according to Mexico’s Security Secretary Alfonso Durazo. The national guard was deployed from the nearby towns of Janos, Moctezuma and Casas Grandes to search for survivors, according to Durazo.

Relatives shared on Facebook that at least one of the children attempted to walk back to town to find help after hiding his injured siblings in bushes.

One 13-year-old eventually walked 14 miles back to the ranch where they had come from in order to get help, Kendra Miller, a relative, told the AP.

“After witnessing his mother and brothers being shot dead, Devin hid his six other siblings in the bushes and covered them with branches to keep them safe while he went for help,” according to Miller’s account reported by the AP. “When he took too long to return, his 9-year-old sister left the remaining five to try again.” She reportedly walked in the dark until rescuers located her hours after the other children had been rescued.

Of the eight surviving children, Five were in stable condition at a hospital in Phoenix. One child is being treated for a bullet wound to the back. The AP reports that the three children who were not wounded are with family in Mexico.

The attack occurred around 1:00 p.m. and the surviving children were rescued around 7:30 p.m., according to the AP.

The AP reports that relatives HAD tried to reach the area of the attack earlier in the afternoon, but were held back by gunfire.

The region has a long history of cartel violence and many have been attacked there, Mexican President Andrés Manuel López Obrador told reporters, including a police chief who was shot and killed more than a decade ago.

According to Sonoran authorities, one suspect was arrested on Tuesday in the border town of Agua Prieta, north of where the attack took place. He was arrested during a separate armed hostage incident in which he had two people gagged.

However, Durazo told reporters on Wednesday morning that, after further investigations, the suspect is not believed to have been involved with the attack on the LaBaron family.

What do we know about the victims?

The victims were reportedly members of an offshoot of The Church of Jesus Christ of Latter-day Saints. The AP reports that a relative, Austin Cloes, said they lived on a successful pecan farm in the hamlet of La Mora.

Jhon LeBaron, who said he was related to the victims, wrote in a Facebook post, “On the morning of November 4th, 2019, three mothers in three vehicles, with fourteen children between them, set out from LaMora, a small family community in the mountains of northeastern Sonora… We lost 9 today. Right now we are waiting, for the morning, for answers, for justice.”

They have not been named officially, though family members have posted pictures of the dead on Facebook and identified them.

LeBaron also identified the survivors as ranging in age from 7 months to 14 years old.

At least one GoFundMe account has been set up by a friend of one of the victims. It has raised close to $40,000 as of Tuesday afternoon.

How has the Mexican government responded?

The Mexican president told reporters Tuesday that, “Violence cannot be met with violence,” and urged for peace instead of retaliatory attacks.

Sonora Gov. Claudia Pavlovich Arellano said on Twitter that her office would be collaborating with authorities to ensure those responsible are found.

“As a mother, I feel anger,” she said. “And a profound pain for the cowardly acts committed in the mountain range between Sonora and Chihuahua. I don’t know what kind of monster could hurt women and children.”

César Peniche Espejel Attorney General for the Mexican state of Chihuahua said in a statement that the agency has deployed resources to help in investigation and has been in touch with at least one family member.

Mexican authorities have recently been struggling to contain cartel violence. In October, authorities botched the arrest of Ovidio Guzmán, the son of Joaquin “El Chapo” Guzmán, when hundreds of gunmen attacked security forces in Culiacán where Ovidio was held.

How has the U.S. government responded?

President Donald Trump tweeted about the attack Tuesday morning, “A wonderful family and friends from Utah got caught between two vicious drug cartels, who were shooting at each other, with the result being many great American people killed, including young children, and some missing.”

“The great new President of Mexico has made this a big issue, but the cartels have become so large and powerful that you sometimes need an army to defeat an army!” Trump continued.

“I haven’t seen President Trump’s message, but I’m sure the contents of it have to do with cooperation and aren’t disrespectful,” Obrador said on Tuesday.

“In the President’s Nov. 5, 2019, phone call with President Lopez Obrador, the leaders agreed that the United States and Mexico will cooperate closely with Mexico to ensure the perpetrators face justice. For example, the FBI has offered assistance to the Mexican authorities,” a State Department spokesperson said in a statement.

U.S. Ambassador to Mexico Christopher Landau tweeted in Spanish that “the safety of our fellow citizens is our top priority. I am closely following the situation in the mountain range between Sonora and Chihuahua.”

“We offer our sincerest condolences to the families on their loss. We are closely monitoring local Mexican authorities’ investigation, and as President Trump and [Secretary of State Mike] Pompeo have stated, we offer to support this investigation,” the State Department spokesperson’s statement continued.

The State Department classifies Mexico as a Level Two travel advisory, and Sonora, the region of Mexico where the attack occurred, as Level Three, suggesting Americans reconsider traveling to the area.

Per the State Department’s website, “Sonora is a key location used by the international drug trade and human trafficking networks. However, northern Sonora experiences much lower levels of crime than cities closer to Sinaloa and other parts of Mexico.”

What is the history of Mormonism in Mexico?

The Church of Jesus Christ of Latter-Day Saints first began sending Mormon missionaries into Mexico into the 1870s, but Mormon colonization in Mexico began in the 1880s during the height of the U.S. government’s crackdown on polygamy, W. Paul Reeve, a professor of Mormon Studies at the University of Utah, tells TIME.

“You had federal marshals scouring Utah territory and over 1,000 men and some women who were sent to prison for practicing polygamy,” he says. So church leadership began to look for places of refuge across U.S. borders.

Some Mormon polygamists moved into northern Mexico, and some moved into southern Canada in the 1880s. They established “some fairly thriving communities in northern Mexico,” Reeve said, but they were upended by the Mexican Revolution of 1910.

During the Mexican Revolution there was substantial anti-American sentiment, and the Mormons who had moved there were seen by many as more American than Mexican. “By 1912 they were violently driven from their homes and returned back into the United States,” Reeve explains.

Most of those Mormons stayed in the U.S. after the revolution ended, but some returned to Mexico.

Reeve points out that at this point the Church of Jesus Christ of Latter-Day Saints officially abandoned the practice of polygomy long ago. In 1904, Joseph F. Smith announced that any member of the church who practiced polgomy would be excommunicated.

Some fundamentalist groups then moved back to Mexico, continuing to practice polygomy into the present, Reeve says. But many members of these colonies stopped performing plural marriages over the years, Matthew Bowman, a professor of Mormon Studies at Claremont Graduate University, adds.

Mexico is also home to many members of the Church of Jesus Christ of Latter-Day Saints. According to the church’s website, Mexico contains 1,455,744 members of the Utah-based church with nearly 2,000 congregations.

Write to Jasmine Aguilera at jasmine.aguilera@time.com and Madeleine Carlisle at madeleine.carlisle@time.com. 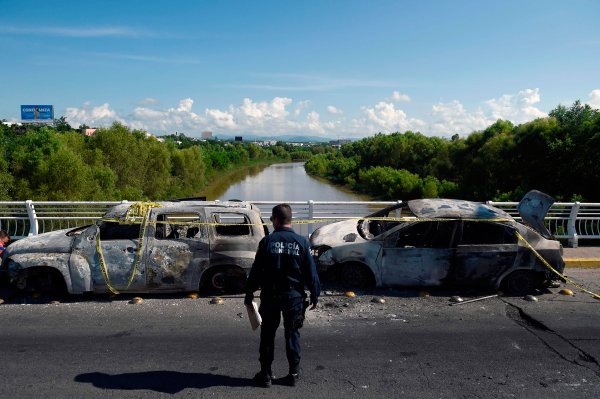 How the Sinaloa Cartel Just Beat the Mexican Army
Next Up: Editor's Pick