Mexico’s finance minister Carlos Urzua abruptly quit his post last week, just seven months into the job. The Mexican peso tumbled more than 2 percent in the aftermath of the announcement before rebounding somewhat, but the resignation points to a deeper problem plaguing the Andres Manuel Lopez Obrador (AMLO) administration. And no, it’s not Donald Trump.

While leftist firebrand AMLO remains popular with the Mexican electorate, international markets and the Mexican business community are decidedly less enamored with the populist politician. That’s why the well-credentialed and widely-respected Urzua (who was AMLO’s finance secretary while he served as Mexico City mayor) was appointed as finance minister in the first place—and why his departure is causing such a stir. In a blistering resignation letter, Urzua called out the appointment of unqualified government officials and extremist economic policies that weren’t “based on evidence” as reasons for his departure.

Truth be told, AMLO wasn’t elected for his fine grasp of economic policy. Rather, his rise to the Mexican presidency was fueled by the broad perception that corruption in Mexico—both in the public and private spheres—had spiraled out of control in recent years, something which even the Mexican business community readily admits. AMLO ran on a fierce anti-corruption campaign, and even his most ardent critics acknowledge that he isn’t on the take. Moreover, more than any other populist world leader elected to office, AMLO is genuinely committed to addressing the underlying grievances of Mexico’s population—he has ambitious plans to improve education and job training, to increase salaries, to improve roads and bridges to better connect marginalized communities, and to improve Mexico’s rapidly deteriorating security situation.

The problem is that all these plans cost real money, and AMLO has neither the experience nor talent to run a modern-day economy. To his credit, AMLO seems genuinely committed to fiscal discipline and general macro stability in the country. But his unorthodox approach to business and economic decisions—like scrapping a new Mexico City airport construction already underway, or refusing to let state oil giant Pemex shore up its woeful finances through privatizations—is straining the country’s economic growth (the Mexican economy contracted 0.2 percent in the first quarter of the year; in January, Pemex’s oil output fell to its lowest level in 40 years), and with it the government finances needed to fund those ambitious social programs he campaigned on. AMLO believes he can find the money to fund his programs through slashing government budgets, but his government austerity push and cuts to salaries and benefits are weakening institutional capacity, forcing out plenty and demoralizing the public workers left behind. He’s also promised not to raise taxes for the first three years of his administration, further limiting his government’s ability to raise any additional revenue.

Which gets us to the heart of the matter. In typical administrations, a president relies on advisors to help craft policy in fields they have limited experience in—for example, new Brazilian president Jair Bolsonaro is similarly ill-equipped to handle economic policy, but has a strong network of economic advisors he regularly defers to. But AMLO has centralized all political decision-making in his own hands, both as a way of limiting corruption in the broader Mexican government and as a way of ensuring his populist political agenda is adhered to. This has already caused friction with a number of his cabinet officials, culminating in the decision of Urzua to resign rather than continue to implement “extreme” measures he believes will negatively impact the Mexican economy.

Urzua’s deputy Arturo Herrera has already been named as the country’s new finance minister, and while he took pains to publicly support AMLO’s economic priorities in a follow-up news conference, he has already had a number of public clashes with the AMLO administration over policy in the past. The reality is that Herrera, like Urzua before him, will be expected only to implement AMLO’s policy decisions rather than shape them in any way. And given how unorthodox those policy decisions are to trained economists like Urzua and Herrera, it’s unlikely Herrera lasts long in his position, either.

“I am convinced that all economic policy must be carried out based on evidence, taking care of the diverse effects these decisions can have and they must be free of all extremism. However, during my time I did not find this was the case.” -Urzua in his resignation letter.

That Trump and his tariff threats are the greatest source of political risk facing Mexico these days. As we’ve already seen earlier this summer, AMLO has no desire (nor ability, if we’re being honest) to get into a tariff war with the US, and would rather appease Trump as much as possible so he can focus on the underlying structural problems facing Mexican society, like the 40 percent-plus of the population that lives in poverty. But addressing such issues require money, and when you’re finance minister resigns on account of how you’re planning to spend that money, you have bigger problems than Donald Trump.

You can have the best intentions in the world, but you also need to have the capacity to act on those intentions. Politics require compromise—both in the traditional sense (like working with your political opposition), but also in the sense that political goals need to be tempered by economic realities. AMLO is fortunate that he has a political opposition that’s currently in shambles, but until he finds a way to square his social goals with the economic resources actually available to him, he’s going nowhere fast. 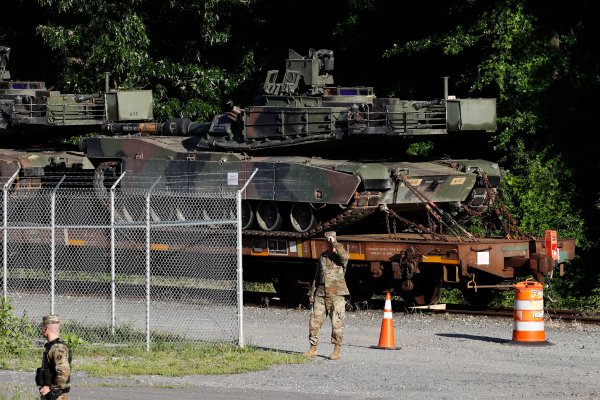 The Absurd Fight Over Trump's July 4th Parade
Next Up: Editor's Pick