Andrew O’Neill, 23, was an early fan of Andrew Yang and his proposal of giving the American people $1,000 a month as a living stipend.

So that’s how he ended up at George Mason University in Fairfax, Va., on Monday night, an hours’ drive away from his hometown of Germantown, Md., as one of the approximately 1,800 people who showed up for a Yang rally ahead of election day on Tuesday. He and the three friends he invited along, like a large portion of the crowd, stuck around afterwards hoping to interact with Yang. O’Neill wanted the candidate to sign his gold coin with Yang’s face on it, swag he ordered as one of the campaign’s first 130,000 donors.

Had you asked him a year ago whether he was surprised that Yang was still in the race this late, he would have said yes. Nobody had heard of Yang, and Universal Basic Income, the centerpiece of his platform, isn’t a hot topic. But as time has passed, he’s grown more and more convinced that Yang’s momentum will continue. “If this man can unite the Youtube comments section, then he can unite anything. I saw him make every single debate, I was like, this guy has a real chance,” O’Neill said. “As soon as I saw people start flip over towards him, there’s not a doubt in my mind that he’s going to make it.”

Yang, a long-shot candidate, is still a long-shot candidate. But less than 100 days before the Iowa caucuses and now less than a year away from the 2020 general election, he’s outlasted the likes of Beto O’Rourke, who dropped out on Friday after failing to gain traction despite becoming a household name in Democratic politics last year. In the last fundraising quarter, Yang raised more than $10 million dollars, which is comparable to Sen. Kamala Harris’s own $11.6 million dollar haul from that quarter. And he’s polled well enough (though still in the low single-digits) to be one of only nine candidates to qualify for the November debate so far, which is better than several other candidates can say. He now even has a Super PAC backing him.

Yang has so far managed to fill the outsider lane well enough to continue to pluck along a primary crowded with more traditionally qualified candidates.

Among his supporters, there is some surprise he has managed to hang on this long, however much they may like him and his proposals. “Yeah, I’m actually quite surprised. I didn’t realize he would make it this far because of how little following he has, but I’m glad it’s growing bigger,” said Ellie Burgos, 18, a film student at George Mason University who is a Yang supporter.

“I don’t think he has enough of a following to like actually get there,” said Grace Walker, 18, a George Mason University forensic science student who said she is “probably” supporting Yang. Though she’d like to see Yang as President, she recognizes there is a small chance he will become the nominee and doesn’t want to “throw away” her vote if it’s a close race between other candidates.

Most members of the so-called Yang Gang, a fervent following with online roots, also said they were not surprised he has lasting power and strongly believe in his base’s ability to grow, in particular as other candidates drop out. On stage, Yang even gave a shoutout to former O’Rourke supporters who had switched over to his camp since he dropped out.

In conversations with TIME, outside of liking UBI, voters often called Yang “revolutionary,” a candidate who gave voice to their concerns about automation. They like his candidness. And in particular, they like his ability to appeal to people across the aisle. Several voters either considered themselves moderates or conservative, and Yang has welcomed support from all ends of the political spectrum.

Asked if he has a plan on growing past his low single-digit polling, Yang pointed to qualifying for each debate “comfortably” so far. “Anyone who wants to bet on our poll levels rising should make that bet right now because you will get your money back and then some,” Yang told reporters after the rally.

Though his stump speech has changed little since he began campaigning — “I am barely a politician” was a big applause line despite his months of campaigning, he said “shit” at least once, and “PowerPoint” is still a chant that breaks out — his campaign has clearly grown more sophisticated. Jeff Link, an Iowa Democratic strategist, told TIME that he watched all of the Iowa State Fair Soapbox speeches in August, and Yang’s was the best.

Yang’s crowds have grown bigger, there’s more swag available (including paper crowns) and a press handler noted their communications operation had improved. His wife Evelyn recently joined him on the trail for the first time, and Rivers Cuomo of Weezer played the opening act of “Yangapalooza” in Iowa.

The higher profile also means the campaign is starting to face more scrutiny. Recently, for example, Yang has been accused of perpetuating the model-minority stereotype. (“Dragging some of these myths into the light actually makes them less powerful and helps dispel them,” Yang told Chuck Todd in response to the criticism.) And when he started giving several families $1,000 from his campaign funds to show how UBI could work, he faced questions over its legality.

But overall Yang’s shown a remarkable ability to stay on message (hardly a debate answer from him on stage hasn’t included mention of UBI), and continued to run an outsider campaign.

To hear Yang tell it, there’s no real surprise that he’s still on the hunt.

“Am I surprised myself by our progress and success?” Yang said. “The answer is no, I always expected to be here. Is it sad for me to see other candidates drop out and surprising? Yes. As a human being it’s surprising and sad, and then if you ask me after the fact, hey did it make sense that that person dropped out? Then of course, after the fact, you’re like, oh it does make sense.”

“But in the moment, you’re fighting your fight and you’re campaigning your campaign and then you figure that others are doing the same thing and then when they drop out, you’re like, oh my gosh, this person I was kind of used to running alongside just disappeared.”

It’s unclear how long or whether Yang will himself disappear from the primary, and it’s an open question how much of a coalition he can continue to grow. Several voters TIME spoke with Monday evening mentioned that they had talked to friends about supporting Yang or said that they themselves been introduced to him by a friend.

Take O’Neill, who did manage to get his coin signed by Yang, and the friends he brought along to the rally: All three said they’re now also part of the Yang Gang. 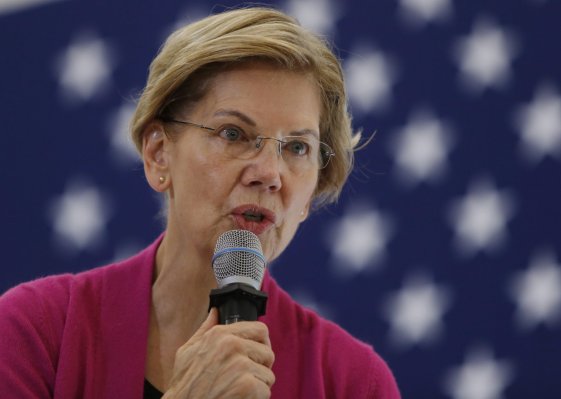