Silas Corman, a 22-year-old University of Maine student, used to consider himself a Democrat, but now he thinks he’s just too progressive for the party. Yet when he saw a Twitter moment featuring Andrew Yang’s universal basic income proposal—which entails giving every American over 18 $1000 per month—he started reading up on the presidential candidate.

“Everybody else in the race, they all have pretty much the same exact ideas, and I don’t really know why you would vote for Joe Biden versus like Beto O’Rourke,” Corman says, after road-tripping to New Hampshire with friends to watch Yang address a crowd of about 150 on the third floor of the Portsmouth Gas Light, a venue that turns into a night club. Yang, he said, is “actually talking about real problems.”

Yang is a former entrepreneur and long-shot presidential candidate who’s running a campaign focused on issues his rivals are mostly ignoring. While his platform ranges from lowering the voting age to 16 to returning earmarks to the legislative process, the idea that’s captured the most attention so far is his push for universal basic income to combat the rise of automation.

The upstart campaign has won Yang a fervent following on Twitter and Reddit. But it’s also translating into real life. Yang is drawing some surprisingly large crowds. In polls, he often runs even with or ahead of other better-known and more experienced Democratic candidates. He’s managed to qualify for the first Democratic debate next month on the strength of that and his fundraising. Yang likes to tout political analyst Nate Silver’s proclamation that he’s no more “of a long shot than several other candidates.”

At least some of his support is coming from the new left: A younger generation of voters who, like Corman, consider themselves too progressive to align with traditional Democrats. Yang says he’s also seeing support from “thousands of Trump supporters, and libertarians, and conservatives, and independents. People have come to me here in New Hampshire and said, ‘You’re what I hoped for when I voted for Donald Trump the last time.’” (In interviews with dozens of people in New Hampshire on Friday and Saturday, TIME did not come across anyone who said they had voted for Trump.)

Many members of what’s been dubbed the Yang Gang say he’s the first political candidate to actually get them excited.

“I didn’t feel strongly about anyone in the last election because it was kind of disheartening, but I’m glad I can elect a candidate now,” says Nick Biasetti, 21, who drove more than two hours on Saturday morning from Saratoga Springs, N.Y., to see Yang at a meet-and-greet in Claremont, N.H.

While the first debate will be Yang’s first exposure to most voters, he’s been gaining support little by little, mostly online. Several voters who spoke to TIME at his events in New Hampshire said they first came across him on podcasts, citing episodes of “The Joe Rogan Experience” and Freakonomics Radio he appeared on earlier this year.

Julie Schoelzel, of Keene, N.H., first discovered Yang when a radio station covered his search for a New Hampshire family to give $1,000 per month as a test for his basic income proposal. (Yang would go on to select the Fassis from Goffstown; the family, which attended one of Yang’s events on Friday night in Portsmouth, told TIME they have yet to pick a candidate.) Schoelzel initially thought it sounded crazy, but she decided to look into Yang, and ended up buying his book on how jobs are disappearing due to new technology. It impressed her. Then she emailed his campaign with a childcare idea.

“They emailed back,” she says. “That to me just sort of summarizes kind of the whole energy behind the campaign. It’s like, actually listening to people, taking people seriously, thoughtfully and in an analytical way.”

But more than anything, his supporters say, it’s Yang’s ideas that draw them to him. It’s that he has a vision.

“If you’re here today, you’ve probably heard this: There’s an Asian man running for President, and he wants to give everyone $1,000 a month. And the first time you heard that, you were like, wow, that sounds like a gimmick,” Yang says often at campaign events. Then he goes on to note that it’s an old idea, and points to Alaska’s Permanent Fund Dividend as a model of how this could work.

“He’s definitely caught my attention,” says Sam Tardiff, a Dover, N.H., resident who attended a Yang campaign event on Friday. “He’s clearly caught a lot of other people’s attention. Anyone that can really come out of nowhere like that is someone you have to pay attention to.” 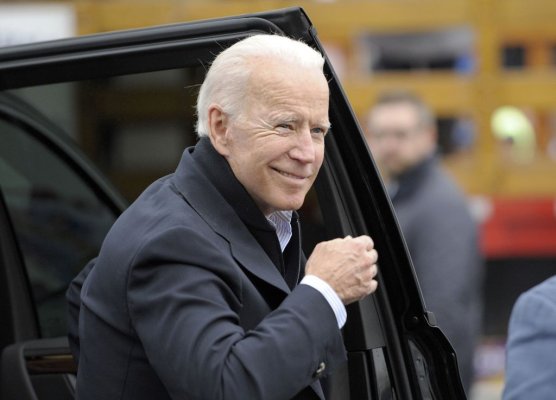 Is Joe Biden as Electable as He Says?
Next Up: Editor's Pick