Melania Trump Unveiled the 2019 White House Christmas Decorations. Here's the Story Behind Them

First Lady Melania Trump has marked the holiday season with the 2019 White House Christmas decorations and the theme is “The Spirit of America.”

That much is clear everywhere you look from the halls decked with “Be Best” ornaments to the model of the White House featuring mini holiday wreaths on its windows.

“’The Spirit of America’ is shining in the @WhiteHouse! I am delighted to share this beautiful exhibit of patriotism for all to see, and excited for everyone to experience the beauty of the #Christmas season!” she tweeted, alongside a short video that features her sprinkling fake snow and examining the festive decor.

“It is with great joy that our family welcomes you to the White House this holiday season as we celebrate the Spirit of America,” the first family said in a souvenir book available to visitors, according to the Associated Press.

The decor includes a tree dedicated to Gold Star military families and etchings of 60 buildings that exhibit American innovation, including the Woolworth Building in New York City and the Space Needle in Seattle, per the AP.

Of course, the iconic gingerbread White House is back this year, with models from other landmarks like Mount Rushmore.

The 2019 White House holiday decor has been in the works for months. The First Lady began her planning back in July, according to a White House statement. “She was dead on schedule,” says Coleen Christian Burke, author of Christmas with the First Ladies, a book that chronicles Christmas at the White House starting from Jacqueline Kennedy Onassis to Michelle Obama.

“It’s like Christmas on steroids,” she says. “The scale is so enormous.”

Burke says First Ladies always borrow and build on each other’s ideas. “They all put their own spin on it.”

This year’s decor reminded her of a former FLOTUS whom she pitched in for.

“Laura Bush also had very popular patriotic theme in 2008 when she did “A Red, White and Blue Christmas,” Burke explained. Another borrowed touch? The paper state flowers on the official Blue Room tree. “They’re a modern take on the state flower balls Mrs. Nixon commissioned, that were later used by Mrs. Reagan and Mrs. Obama.”

You may have seen reading material propped up like this before. “The open book decor on the Green Room mantle is in the style of Barbara Bush, Laura Bush and Michelle Obama who all loved decorating with books,” Burke said.

Christmas trees and holiday decorations in the theme of, "The Gift of the Holidays," are seen in the Library of the White House in Washington, D.c. on Nov. 29, 2016.
Saul Loeb—AFP via Getty Images

As for all that gold for Christmas, it’s far from just a Trump thing. “Other First Ladies have also used gold, particularly Mrs. Clinton and Mrs. Reagan, but this is done in a different way,” she said.

The Cross Hall leading into the State Dinning Room is decorated during the 2019 Christmas preview at the White House, Monday, Dec. 2, 2019, in Washington.
AP—Copyright 2019 The Associated Press. All rights reserved.

Of course, it’s historically only matter of time before the internet descends with memes of the displays.

That was the case when Melania ran with a berry red color palette throughout the house for the “American Treasures” theme for last year’s decorations. The red represented the stripes found on the presidential seal signifying valor and bravery, according to the White House—but that’s not what the internet saw.

The reaction was so strong that FLOTUS eventually issued a response. “We are in the 21st century and everybody has a different taste. I think they look fantastic,” Melania said days after the presentation.

“What she was doing with those very large cranberry trees was throwing back to history and reinterpreting it,” Burke says. “They were fake cranberries, but it was a real connection to First Ladies.”

First Lady Betty Ford was the first to introduce the cranberry tree in the red room in the ’70s. The annual tradition continued each year until Mrs. Obama opted for a cranberry garland over the fireplace. “That was a big deal in the decorating community,” Burke says.

“What people didn’t realize was that this was a historical homage to First Lady decorating with a different way of looking at cranberry. I think that got completely lost in the internet sensation of ‘these trees look scary,” she added.

Christmas decorations in a hallway of the East Wing of the White House during a press preview of the 2017 holiday decorations November 27, 2017 in Washington, DC. (Photo by Alex Wong/Getty Images)
Alex Wong—Getty Images

Burke explained that the volunteer decorators are the foot soldiers executing the First Lady’s vision.

In 2017, Melania’s vision explored the “Time-Honored Traditions” theme, which was apt as Melania tipped her hat to plenty of landmark White House Christmas decoration moments.

First Lady Jackie Kennedy was the first to use a theme to unite her Christmas decorating efforts. Her opener? The Nutcracker, according to Burke, who says that subsequent First Ladies, including Hillary Clinton and Barbara Bush, chose the George Balanchine’s ballet as a theme or just a reference several times in the ensuing years.

Melania’s white tree-lined hallway also earned the ire of the internet, where critics compared it to everything from Narnia to the creepy upside down world in the Netflix series Stranger Things.

But Burke says the hallway decor wasn’t a departure from past First Ladies’ choices. “The First Ladies always loved a snowy look, and she recognized how beautiful it was,” she says, adding that the red topiary roping wrapping the branches was a nod to Laura Bush.

O.K. Remind me what Michelle Obama’s Christmas decorations were like again

Holiday decorations are seen at a hallway of the White House December 3, 2014 in Washington, DC for the theme "A Children's Winter Wonderland." (Photo by Alex Wong/Getty Images)
Alex Wong&Getty Images

Turns out, Michelle walked a similar wintry line when it comes to snow-covered white trees.

“Mrs. Trump actually improved on what we tried to do [with Michelle Obama],” Burke says. “It was very hard to install our birch branches in the cross hall because you can’t go in and measure the trees.”

Of course, Melania was not the only one to get the meme treatment for her seasonal vision.

The festive visuals were a ripe target in 2016 when people imagined Michelle Obama’s snowmen as Walking Dead zombies. Even her husband joked in an interview with People that he was afraid of them.

“I would move,” President Obama said, cracking a joke about his wife’s Let’s Move campaign. “If I see one of those snowmen in my bedroom, I’m moving.”

“Running from the snowmen,” Michelle added.

What to make of Melania’s take on the decorations?

Even though the Trump family is not known for subtle décor, Burke says that Melania’s approach is no more extravagant than her predecessors when it comes to scale and style.

“The amount of trees has really been no different than the Obamas and the Bushes,” Burke says, adding that they usually use upwards of 50 trees.

The First Lady who really went all out was Nancy Reagan, whom Burke says brought in an enormous number of trees. “No one lived it up more with the glitz and the glamour than Nancy Reagan. The woman had thousands of gold foil snowflakes,” she says.

Most of the prep happens in an off-site warehouse, the location of which is kept under wraps. Every year, the bus that brings the decorators to the warehouse takes a roundabout route—perhaps, Burke muses, in an attempt to prevent the decorators from knowing exactly where they are. “The bus just got lost every time,” she says.

The actual installation is tricky, too. Since decorators can’t visit the White House ahead of time to measure all of the nooks and crannies, they have to work quickly once they finally arrive.

Regardless of how grand or traditional a given First Lady’s vision, Burke says that the reason the White House decorates is so that people can experience and emulate a part of the trappings themselves.

“I worked under a Republican president and a Democratic president, and I can tell you that the motivation is really celebrating the holiday so that the American people can enjoy it,” she says.

Christmas decorations in a hallway of the East Wing of the White House during a press preview of the 2017 holiday decorations November 27, 2017 in Washington, DC.
Alex Wong—Getty Images

–With reporting by Rachel E. Greenspan 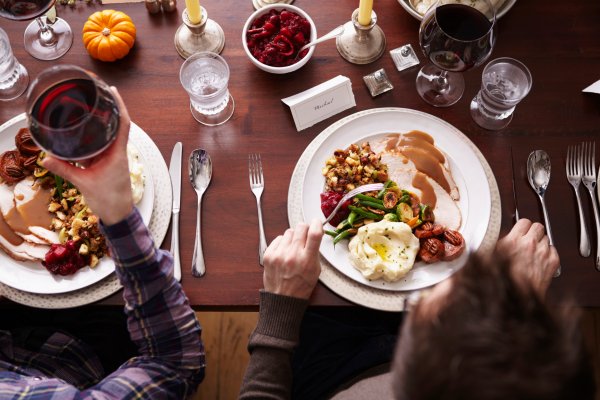 Here's What Stores Are Open and Closed on Thanksgiving 2019
Next Up: Editor's Pick