First Lady Melania Trump unveiled the 2018 White House Christmas decorations on Monday, and the internet is predictably all over one aspect of this year’s festive additions: those red trees.

Just like last year, Christmas came early for the internet, as people on Twitter couldn’t resist joking about the first lady’s chosen holiday decor. And in 2018, some trees stood out more than others.

Red trees for Christmas — decorations optional — are not uncommon during the holidays, even if they are a break with traditional green. But they are striking enough to get people talking and riffing.

The White House ran with a crimson theme elsewhere, decking the Cross Hall and Grand Foyer halls with 14,000 red ornaments on 29 trees. Evidently, the red ornaments are symbolic. The red represents the stripes found on the presidential seal signifying valor and bravery, according to the White House.

Some people were less interested in that explanation, as people imagined what they wanted with the visuals of the festivities.

This year, the White House Christmas decorations overseen by the first lady have an “American Treasures” theme, intended to recognize America’s “unique heritage.”

Despite the red trees in the people’s house this year, the official 2018 White House Christmas tree is a more traditional green Fraser, and stands in the Blue Room draped with more than 500 feet of blue velvet ribbon embroidered in gold with each state and territory. Meanwhile, the Gold Star Family tree pays tribute to troops.

And in the East Room, there are also 14-foot Noble fir trees bedecked with handmade paper ornaments. You can spot other brightly colorful trees in the Vermeil room, where there are trees sparkling with blue and gold.

People had a field day with Melania Trump’s traditional Christmas walk in 2017, when she presented a picture of snowy white trees.

It would seem that if you give the internet Melania walking through a tree-lined corridor, you’ve got a foundation for a very easy meme.

Just days after the unveiling, the First Lady stood up for her decorations. In an interview at Liberty University Wednesday as part of a town hall on the opioid crisis, when asked about the reception of her Christmas decorations, she said: “We are in the 21st century and everybody has a different taste,” Trump said. “I think they look fantastic.” 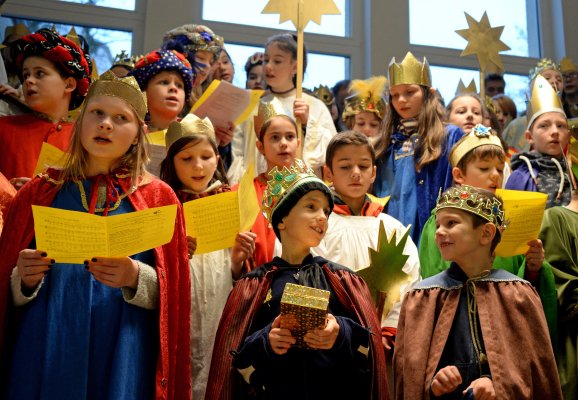 Avoiding "Little Drummer Boy" Is the Latest Viral Challenge
Next Up: Editor's Pick