Here's How U.S. Forces Finally Tracked Down and Killed al-Baghdadi

For all the attention, invention and investment that the U.S. intelligence community devotes to spy satellites, communications intercepts, and new technologies such as artificial intelligence, the raid that killed ISIS Leader Abu Bakr al-Baghdadi was launched by the same old-fashioned tool that led to Osama bin Laden: human intelligence.

After years of trying in vain to get a real-time lock on al-Baghdadi’s location, the big break came not from space or from a strategically located eavesdropping post, but from the wife of an al-Baghdadi aide and one of the couriers he employed to avoid using mobile phones and computers that could have made him easier to track. U.S. officials said the two were captured in western Iraq.

Using names and locations that the wife and courier gave up, two U.S. officials said on Sunday, the CIA and Iraqi and Kurdish intelligence officers began recruiting agents along the routes that al-Baghdadi traveled in the desert astride the Syrian-Iraqi border. Officials began surveilling routes he used, places he stopped, and looking for patterns to his travel, including his brief stays in small villages such as the one where he died.

The U.S. Special Operations Command, based in Tampa, Florida, had standing plans for targeting al-Baghdadi and his small inner circle, said a third official. Some called for the use of drones, which the CIA and the military have employed in Iraq, Syria, Afghanistan, Pakistan, Yemen and elsewhere, this official said. Others relied more heavily on inserting Army Special Forces and Navy SEALs on the ground, as the U.S. did in targeting al-Qaeda leader Osama bin Laden in Pakistan.

The official described the plans as “basic blueprints” and said they were rehearsed and updated constantly as ISIS lost its grip on cities such as Mosul, where the group’s leaders hid among thousands of civilians.

“I don’t think we could have done this without the help we got from the Syrian and Iraqi Kurds, which continued after we began the troop pullout,” one of the officials said, quickly adding that Iraq military and intelligence officers “kicked the whole thing off.”

President Donald Trump gave approval for the operation, codenamed Kayla Mueller after an American woman taken hostage, raped repeatedly and murdered, to begin on Friday (5 p.m. EDT), the first two officials said, and the raid began at roughly midnight local time at the airfield in Erbil, Iraq with a mix of eight Apache attack and CH-47 Chinook helicopters carrying Delta Force special operators and at least one dog.

The attackers flew low to avoid detection for about 70 miles from Erbil to Barisha, a village just north of Idlib where al-Baghdadi, his bodyguards, and some of his children were spending the night.

President Donald Trump announces the death of ISIS leader Abu Bakr al-Baghdadi, in a raid by American special operations forces in Syria, in remarks at the White House in Washington, D.C., on Oct. 27, 2019.
Gabriella Demczuk for TIME

As the attackers approached their landing zone outside the building that housed al-Baghdadi, which spies had described and which unmanned U.S. surveillance planes and satellites had photographed, the Apache helicopters and fixed-wing warplanes laid down a barrage of covering fire, the officials said, heavily damaging the compound.

Following standard procedure, the force first tried to persuade the inhabitants to leave the compound, but without success, then blew holes in the walls rather than using the doors or windows.

At some point, al-Baghdadi fled down a tunnel beneath the compound, with the U.S. forces in pursuit.

In announcing al-Baghdadi’s death, Trump has described him as “crying, whimpering, screaming” as he was trapped at the dead-end tunnel and detonated an explosive vest. None of the officials confirmed that account.

Defense Secretary Mark Esper told CNN that soldiers tried to persuade al-Baghdadi to give himself up. “We tried to call him out and asked him to surrender himself. He refused,” Esper said.

Instead, al-Baghdadi blew himself up along with three children he’d taken into the tunnel, the officials said.

The officials’ descriptions came on the heels of Trump’s own gory and detailed account of not only the raid, but the intelligence efforts leading up to it. Among other details, Trump said “two or three efforts” to capture al-Baghdadi had been called off in recent weeks because the ISIS leader changed his travel plans; that the raiders had seized “highly sensitive” material and information from the targeted compound; that they’d had the technology to test al-Baghdadi’s DNA quickly; and that the forces had spent about two hours in the compound. Trump also gave an accounting of the number of aircraft involved in the mission, and the amount of time al-Baghdadi had been in intelligence officials’ sights before the raid.

Samantha Vinograd, a former security official in the Obama administration, said on CNN on Sunday, “It’s really unprecedented when you think about how much detail he actually went into.”

“Immediately after a special operation like this, there’s increased risks of retaliatory attacks and risks to human sources on the ground. The level of detail that President Trump went into in that press conference increases the risk to sources that may still be on the ground,” she said.

Michael Downing, the former head of the Counter-Terrorism and Special Operations Bureau for the Los Angeles Police Department who has studied ISIS’ organizational structure, says there’s already a heightened risk of blowback from ISIS as a result of al-Baghdadi’s death. “Now is one of the most dangerous times,” Downing says. “When you injure an animal, that is when it is most dangerous.”

At his news conference, Trump defended his use of gory details in describing what he said were al-Baghdadi’s final moments. “I think it’s something that should be brought out so that his followers and all of these young kids that want to leave various countries, including the United States, they should see how he died,” Trump said. “He didn’t die a hero. He died a coward.” 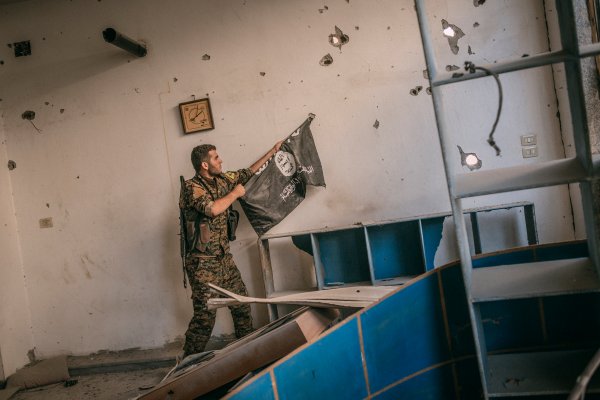 Al-Baghdadi Is Dead. Where Does That Leave ISIS?
Next Up: Editor's Pick