The Most-Wanted ISIS Leader Is Still Alive. Here's How the U.S. Is Using Drones to Hunt Him Down

The call for help came from half a world away to a windowless room at a remote airbase in South Dakota.

An American military advisor was calling from eastern Syria, asking the team at Ellsworth Air Force Base to deploy a drone to hunt down a small group of ISIS gunmen harassing the Syrian Democratic Forces (SDF), the U.S.-backed force fighting in the region. In a series of hit-and-run attacks, the ISIS gunmen had turned the SDF’s makeshift outpost into a shooting gallery, injuring several Syrian troops and putting the U.S. advisors at-risk before melting into the nearby civilian population.

Within minutes, the operators directed a MQ-9 Reaper drone “on-station” in the eastern town of Baghouz to wait for the gunmen to return. But when they appeared, the operators held fire. Rather than launch an airstrike, the operators watched the suspects mount another attack, speed away in a tan vehicle, and then drive to a low-slung building with a thatch-roof on the outskirts of town. There, the drone operators quietly surveilled the suspected terrorists from above.

For two days, the operators watched as the militants brought in more vehicles and weapons. They watched as other people came and went, and gathered intelligence on the visitors. But when the gunmen started preparing for another attack, the operators were cleared to strike.

The drone launched two missiles — first one, then another — which obliterated the building destroying the weapons cache and killing the fighters believed to be inside. “After that, there weren’t any other attacks in the area,” says an Air Force intelligence analyst, who, like others spoke to TIME on the condition of anonymity due to security concerns.

The airstrike described here occurred in November, but similar events have become routine in recent months, indicative of a new phase of the U.S.-led effort against ISIS. While the high-tempo, street-by-street fight against the militant organization is over, it has been replaced by a deliberative hunt for ISIS leaders, underground cell commanders and other so-called high-value individuals.

Indeed, ISIS leadership ranks have proven resilient despite the five years of war. The group, analysts say, has been quick to adapt to new circumstances. No longer capable of seizing and holding territory, the surviving foot soldiers have instead gone back to its guerrilla roots, carrying out ambushes, bombings and assassinations.

“ISIS has morphed into a less pressing force, but it has not completely gone away,” said Col. Julian Cheater, 432nd Wing commander, who oversees Air Force drone operations. “While caliphate has been defeated, we still need to work with our ground partners to make sure that the remaining embers don’t flare up again.”

No figure is more sought after than Abu Bakr al-Baghdadi, the mercurial ISIS leader, who appeared in an 18-minute propaganda video Monday after a five-year absence from public view. His appearance, clad in a black tunic with a Kalashnikov rifle at his side, comes after years of erroneous reports that he was seriously wounded or killed. Baghdadi stated that ISIS’s fight against the West is far from over. “Our battle today is a war of attrition to harm the enemy, and they should know that jihad will continue until doomsday,” he tells a roomful of followers who are all seated on the floor with their legs-crossed.

The video footage is now being scrutinized by U.S. intelligence analysts for the smallest detail — such as the ornate embroidery on the pillows at Baghdadi’s feet and the design on his followers’ headscarves — that might provide a clue to betray his location.

The U.S. also relies upon airborne surveillance, captured communications chatter, signals intelligence and information gathered by allied forces in Iraq and Syria. Despite the unceasing flow of information, finding and tracking ISIS operatives is a painstaking task. ISIS isn’t brazenly waving black flags or openly brandishing Kalashnikovs on their backs unlike in the early days of the war. Leaders eschew cell phones, emails and computers out of fear they’re being traced. Drone operators tell TIME that they’re now watching scores of locations for days, even weeks, to ensure the identities of those inside.

American drone pilots and intelligence analysts’ primary mission is to find ISIS operatives before they attack or mount an effort to reestablish power in recently liberated territory. This requires that drone operators fly above recaptured ISIS territory — all day, every day — looking for the faintest indication of the group’s resurgence. Much like a detective on a stakeout, a single piece of evidence could result in a break through. The military’s ability to connect dots from these disparate scraps of information could be the difference in whether the battlefield victory over ISIS endures or is short lived.

“We’re focusing on those ISIS remnants, sleeper cells and small pockets that may try to resurge and conduct an isolated attack,” the intelligence analyst tells TIME. “For us, it’s going to be watching compounds that are suspected and taking the time and persistence to verify what exactly is going on in these areas where they have this ability to regroup.”

This mop-up work could prove critical. The Pentagon, after all, has squandered hard-fought gains before. ISIS only rose to dominance after U.S. troops left Iraq in December 2011 at the end of an eight-year occupation. By 2014, the Sunni extremist group launched a lightning offensive in Iraq and Syria that resulted in the seizure of territory the size of Britain. Similarly, in Afghanistan, the Taliban was able to reconstitute after being toppled from power just weeks after the Sept. 11, 2001 attacks. The Taliban regrouped while Washington’s focus shifted to the war in Iraq. The insurgents now hold more territory now than at any time since the U.S.-led invasion.

Just last week, U.S.-led military coalition announced a new wave of airstrikes in Iraq’s northern town of Wadi Ashai where fighters have been attempting to move munitions, equipment and personnel “to exert influence and stage a comeback.” The Institute Study of War (ISW), a Washington think tank, recently identified nine regions across Iraq and Syria where ISIS still has support and conducts operations. The group has more clout today than when U.S. forces initially pulled out of Iraq in 2011.

“Absent sustained pressure,” the U.S. military predicts that the terrorist group would re-emerge in Syria within six to 12 months, according to a recent Department of Defense Inspector General report. The group remains a “potent force of battle-hardened and well-disciplined fighters,” the report said.

The new role of drone surveillance and intelligence in the counter-ISIS mission marks a shift in the long fight against ISIS in Iraq and Syria. Since August 2014, American drone operators on the virtual front lines supported the advance of foreign ground forces in a high tempo war. Over that period, U.S. warplanes unleashed more than 100,000 bombs and missiles on militant targets in non-stop combat missions.

The air strikes played a vital role in dislodging and killing ISIS fighters in densely populated cities, where snipers, booby-traps and car bombs threatened allies and civilians on a daily basis. U.S. counter-insurgency efforts exacted a high price, however. The Pentagon acknowledges that U.S. airstrikes have killed at least 1,291 civilians across Iraq and Syria, since operations against ISIS began. Non-governmental organizations, such as Airwars, puts the figure much higher. It estimates that at least 7,742 innocent people have been killed by U.S.-led air strikes.

“Any significant reduction in strikes in Syria is likely to benefit local populations,” says Chris Woods, director of Airwars. “However, even low intensity … campaigns carry risk.”

Today’s quieter battle against ISIS hinges in part on past U.S. intelligence work gleaned from interrogations of captured fighters and commanders as well as paperwork, laptops and cellphones gathered by Iraqi security forces and U.S.-backed Syrian militias.

The counter-ISIS battle in Syria is different in many ways than past U.S. wars. There are few U.S. troops on the ground actually fighting or providing targeting information. American Special Operations forces coordinate with local forces to gather intelligence from information and material gathered from the battlefield, but also a wide-range of informers with firsthand knowledge about ISIS operations.

“If we get intelligence that a particular ISIS leader or facilitator is in a specific area, we watch that area for days on-end until we can have the correct degree of certainty that they’re there,” another intelligence analyst says. “So whether that’s SDF rolling up an individual or U.S. conducting an airstrike or someone else conducting an airstrike that’s what we’re doing.”

Drone pilots’ shifts can be mind-numbingly dull, circling over a house or a vehicle for hours, waiting to observe something that could make the difference in launching an airstrike. “We’re staring at the same buildings or tents for long periods of time,” a drone pilot said. “It can be difficult to motivate guys to stare at the same building for eight hours, but it’s rewarding when you see the pay off.”

The operators continue to hunt for new targets. And the closer they look, the more they find. Thus, the mission remains open-ended. 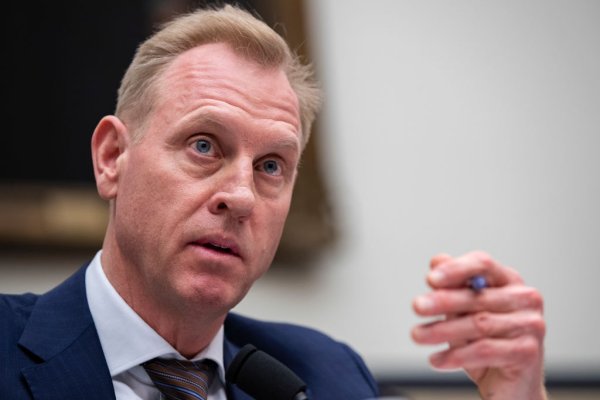 Trump's Acting Defense Chief Was Accused of Calling the F-35 'F-cked Up.' He Told Investigators It Was 'Awesome'
Next Up: Editor's Pick