Pentagon Warns ISIS Could Resurge in Syria Within Months

A member of the Iraqi forces walks past a mural bearing the logo of the Islamic State (IS) on March 1, 2017, on the southern outskirts of Mosul.
Ahmad Al-Rubaye—AFP/Getty Images
By W.J. Hennigan

Despite President Donald Trump’s assertions, ISIS is not defeated and could re-emerge without continued military engagement in Syria, according to candid assessments from the Pentagon and the State Department released this week.

The U.S. military said “absent sustained pressure,” the Sunni Muslim extremist group would re-emerge in Syria within six to 12 months, according to a new Department of Defense Inspector General report. At the same time, the State Department issued a statement that declared ISIS “remains a significant terrorist threat and collective action is imperative to address this shared international security challenge.”

The statements are at odds with Trump’s announcement Dec. 19 that all 2,000 U.S. troops currently stationed in Syria will come home because the four-year military battle against ISIS is over. “Our boys, our young women, our men, they’re all coming back and they’re coming back now. We won,” he said in a video posted on Twitter.

Meanwhile, the U.S. military officials in charge of running the war against ISIS said the group remains a “potent force of battle-hardened and well-disciplined fighters” that “could likely resurge in Syria,” according to the Inspector General report. ISIS also appeared “unfazed” by the daily American airstrike campaign.

The militants’ ability to quickly reconstitute raises questions about pulling the troops out and trying to keep up the pressure from afar. In an interview with CBS on Sunday, Trump said U.S. troops would first be deployed to Iraq, then back stateside — all the while watching ISIS in Syria.

“We’ll come back if we have to,” Trump said. “We have very fast airplanes, we have very good cargo planes. We can come back very quickly, and I’m not leaving. We have a base in Iraq and the base is a fantastic edifice. I mean I was there recently, and I couldn’t believe the money that was spent on these massive runways. And these — I’ve rarely seen anything like it. And it’s there. And we’ll be there.”

The counter-ISIS battle in Syria is different in many ways than past U.S. wars. There are few U.S. troops on the ground actually fighting or providing targeting information. American Special Operations forces inside Syria coordinate with local opposition fighters called the Syrian Democratic Forces, an alliance of mostly Kurdish and Arab fighters. U.S. forces train and advise the group.

U.S. military commanders rely heavily on Syrian forces to gather intelligence from information and material gathered from the battlefield, but also a wide-range of informers with firsthand knowledge about ISIS operations. If U.S. troops are not on the ground in Syria, counter-terrorism analysts fear Americans access to those intelligence streams may dry up. If that happens, the U.S. ability to target ISIS will suffer.

The intelligence picture gets cloudy from a distance. U.S. drones and spy planes circle high above Syrian towns watching what’s happening on the ground while also intercepting communications chatter, signals intelligence and other information. But the most valuable information comes from having a presence on the ground. Moreover, the power vacuum caused by the departure of U.S. troops in Syria could be filled by ISIS or al-Qaeda in Syria or Iraq, according to U.S. intelligence chiefs.

Although ISIS is no longer in control of any major city in Iraq or Syria, the fighting is not over completely. The U.S.-led military coalition continues to battle daily against the remaining 2,000 ISIS fighters holed up in a stretch of desert straddling the Iraq-Syria border.

ISIS has lost roughly 99% of its territory in Iraq and Syria. But after Trump announced his intention to withdraw forces from Syria, U.S. military and intelligence officials have been vocal that the group still poses a security threat. Not only has ISIS expanded and established cells around the world, it routinely mounts attacks in Syria, such as the Jan. 16 suicide bombing that killed four Americans at a restaurant in Manbij. ISIS leadership retains “excellent command and control capability” in Syria, according to the Pentagon report, and continues to attract an estimated 50 foreign fighters to Syria and Iraq each month.

The Syrian Democratic Forces are now holding hundreds of ISIS foreign fighters at prisons in eastern Syria, hoping to hand them over to their home countries but few governments are willing to take them. “The United States calls upon other nations to repatriate and prosecute their citizens detained by the SDF and commends the continued efforts of the SDF to return these foreign terrorist fighters to their countries of origin,” said State Department Deputy Spokesman Robert Palladino.

The U.S. will implore foreign allies to take custody of the fighters Wednesday when 79 members of the international coalition aimed at eradicating ISIS meet at the State Department. 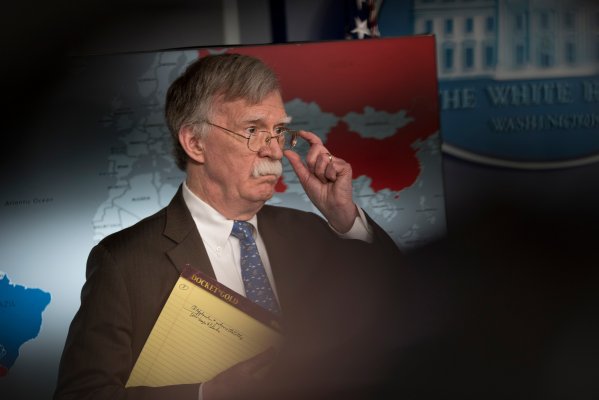