Pittsburgh Is Moving Forward With Gun Reform After the Tree of Life Shooting. But the Legal Battle Is Just Beginning

Pittsburgh’s City Council has approved three controversial gun reform bills months after a gunman shot and killed 11 people at the city’s Tree of Life synagogue. But the votes set up the city for a number of legal challenges.

The 6-3 final vote on Tuesday on a package of three gun control bills comes about five months after the deadly synagogue shooting. The legislation would restrict military-style assault weapons (including the AR-15, which authorities have said the Tree of Life shooter used during the massacre), ban the use of armor-piercing ammunition and high-capacity magazines, and allow guns to be seized temporarily from people deemed to be a danger to themselves or others.

Councilwoman Erika Strassburger, who introduced the reforms with Councilman Corey O’Connor in December, tells TIME that the Tree of Life shooting marked a turning point in the city’s reckoning with gun laws, noting that activists and politicians in the region have been fighting to reduce violence for decades. “This is not just about mass shootings like the ones that have happened in our district,” she says. “It runs the whole gamut of gun violence. Homicides kill people on a weekly basis and it’s just too much.”

Twelve people so far have died this year in shooting deaths in Allegheny County, whose county seat is Pittsburgh, according to The Pittsburgh Post-Gazette, which compiled data from the county medical examiner as well as local police reports. City officials said in January that, in 2018, Pittsburgh had 55 homicides, including the Tree of Life victims, and 114 non-fatal shootings. Officials did not specify if all the homicides were shooting deaths.

Pittsburgh has a home rule charter, which affords the city some independence from the state legislature. But Pennsylvania’s law on the charter says a municipality “shall not enact any ordinance or take any other action dealing with the regulation of the transfer, ownership, transportation or possession of firearms.” The state’s firearms code has an amendment that expressly prohibits municipalities from regulating the “lawful ownership, possession, transfer or transportation of firearms, ammunition or ammunition components.” That inherent tension has set in motion a legal battle over gun rights in Pittsburgh and Pennsylvania more broadly.

Pennsylvania’s legislature is the only entity that can change the state law to grant cities and municipalities the right to regulate firearms on their own, according to David Harris, a professor at the University of Pittsburgh’s law school. Right now, Pittsburgh and the courts can battle it out over the specificity of wording in the bills and the state legislation, Harris tells TIME. Because the provision from the city bans the use of certain weapons, one could argue that the state law does not technically stipulate anything about firearms usage. “In order to have this stand up, courts will have to find that the idea of using these items that are now part of the city’s law is different than all the other ways the state prohibited cities from regulating firearms,” Harris says.

Gun rights advocates in the Pennsylvania region have repeatedly challenged the legality of the legislation since it was announced. In January, hundreds of gun rights supporters gathered at a pro-gun open carry protest at the City-County Building, where speakers defended their rights to carry weapons and decried Pittsburgh Mayor Bill Peduto. Later that month, more than 100 critics and supporters of the legislation appealed to the city council at a public hearing.

Justin Dillon, a resident of Erie, Pa. who organized the pro-gun rally, tells TIME he felt the legislation, which he argues violates state law, came as an outsize reaction to the Tree of Life shooting. “They used the shooting tragedy and used emotions to pull proposed ordinances,” he says. “You want law abiding gun owners and people that own guns to follow your laws and regulations, but while you’re breaking the law.”

“While I certainly see the desire for such type of legislation at the state and federal levels, I believe that City Council does not have the authority to pass such legislation,” he wrote in a letter addressed to O’Connor. “I am also certain that you realize that if such legislation passes, there is sure to be a resident of Allegheny County who seeks to file a private criminal complaint alleging a violation of §6120,” referring to the statute that bans municipalities from regulating firearms.

Still, proponents of the city’s gun control bills remain steadfast. Peduto, in response to gun rights advocates saying they would file complaints against him, said: “Arrest me.” He is expected to sign the bills into law.

Beyond a question of legality and wording is a bigger fight to bring more control to cities and municipalities, Harris says. Pittsburgh officials are well aware of the state law. By challenging it, they hope to harness energy statewide to convince the state legislators to change the rules. Such actions stem from frustration over not being able to react to gun violence in the past, according to Harris. He points to New Zealand, where lawmakers have already voted on new gun restrictions after a gunman killed 50 people at two mosques in March. “They’re frustrated that they can’t simply do what the Prime Minister of New Zealand did after the shooting at the mosques,” Harris says. “She said, ‘That’s that.’ It hasn’t even been a month.”

Harris adds that Pittsburgh’s new ordinance symbolizes the city’s attempt to do anything to try and make a change. “They don’t want to just say, ‘Nothing is possible,'” he says. “They’re willing to try and have the fight.”

The ordinance itself, according to Harris, is “a pretty narrow kind of thing.” But it shows the lengths to which cities can go to show they want to determine their own laws for firearms regulation. In Pennsylvania, home to a diverse gun culture, having the state dictate firearms regulations doesn’t suit each and every town or municipality, Harris says. “It’s very different to live in Pittsburgh or Philadelphia or by Harrisburg near the state game reserves,” he says. “It’s just very different. Cities would like to see if they would have the freedom to determine what’s appropriate for them.”

The National Rifle Association said Tuesday that it was helping Pittsburgh residents file a lawsuit to challenge the city’s definition of “large capacity magazines” in light of the newly enacted ordinance.

“Pittsburgh residents have a right to carry the self-defense tool that best suits their needs and the NRA is proud to support this challenge to the city’s magazine ban,” Chris W. Cox, the NRA’s executive director, for its institute for legislative action, said in a statement. “Restricting law-abiding citizens from exercising their constitutional rights will do nothing to stop violent criminals.”

Peduto told the Post-Gazette he was not surprised by the legal challenges.

“We have not been able to get any movement in Harrisburg and Washington, and the answer is just don’t do nothing. We’ve seen what doing nothing has done. It has led to an escalation in severe mass murders. And we’re going to take action on a local level,” he said. “So we’re not surprised about the lawsuit. We anticipated it. And we look forward to the next part of this challenge, which will be through the court system.” 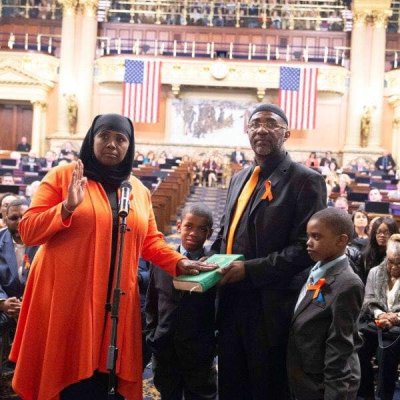 Pennsylvania Lawmaker Prays 'God Forgive Us' Before Swearing in First Muslim Woman To State Legislature
Next Up: Editor's Pick