Review: New Zealand Comedy Hunt for the Wilderpeople Has Stealth Charm to Spare

Julian Dennison, left, and Sam Neill, right, in "Hunt For The Wilderpeople.
The Orchard—AP
By Stephanie Zacharek

Coming-of-age stories, finding-yourself-in-the-wilderness stories, fugitives-on-the-run stories: If you’ve been watching movies for any length of time, you’ve already seen multiple versions of all of these. But you probably haven’t seen anything quite like New Zealand filmmaker Taika Waititi’s Hunt for the Wilderpeople, which rolls all of those genres into a buoyant, expansive, breezily enjoyable whole. Depending on how you look at it, it’s either a comedy with solid dramatic underpinnings or a drama so light on its feet that it plays like the purest comedy. Either way, the cranky charisma of the performers, plus the cheerfully idiosyncratic rhythms of Waititi’s filmmaking, keep it clicking.

Twelve-year-old Ricky (Julian Dennison) is an alleged juvenile delinquent in the making: His crimes, as enumerated by the social worker who has escorted him to one foster home after another (the drily hilarious Rachel House), include “stealing, spitting, throwing rocks, kicking stuff and defacing stuff” as well as the classic “loitering.” These transgressions, shown in a fleet, skittering montage, are hardly grave. But no one seems to want Ricky, a heavy-set kid who puts up a glum gangsta front but who actually has a fondness for reading and a knack for putting his feelings into haiku on the fly.

He finds his place, at last, in a ramshackle house in the middle of nowhere with Bella (Rima Te Wiata) and her gruff, laconic husband Hec (Sam Neill). Bella is a lover of cat figurines. She can also kill a wild hog, with barely a tussle, using just a knife. Ricky comes to adore her—you understand why when you hear the ridiculous song she composes and performs for his thirteenth birthday—but her sudden death leaves him and Hec stranded emotionally. Hec doesn’t seem to care much for Ricky. And so, knowing that he’s going to be sent off to another home, Ricky runs off into the bush with his dog, Tupac. Hec finds him, but a series of mini-disasters keep the duo trekking through the wilderness for months. They come to understand each other, but it takes longer than you’d think for them to actually like each other.

Waititi adapted the film from New Zealand novelist Barry Crump’s 1986 Wild Pork and Watercress. But if you’ve seen Waititi’s previous film, the wild, woolly and jovial vampire comedy What We Do in the Shadows (featuring Jemaine Clement, from Flight of the Conchords), you’ll notice his distinctive, oddball stamp on this one. Waititi has a gift for keeping a story moving not in a straight, predictable line but in an errant zigzag that holds your attention: As a filmmaker, he’s like a kid jumping from one jagged rock to another—you keep watching just to see how he’ll complete each crazy leap. He also appears in a cameo here, during a funeral sequence that’s almost criminally funny. Hunt for the Wilderpeople—the title refers to Ricky’s realization that he and Hec are like wildebeests on the run—is made up of dozens of familiar elements, but Waititi assembles them into something wise and generous and eccentrically funny. Glimpsed from afar, it might look an ordinary creature. You have to get up close to see how rare it is. 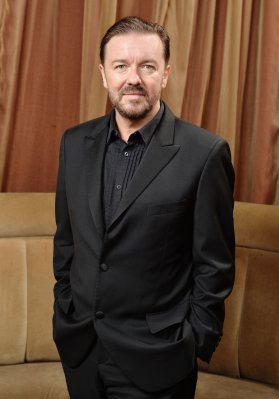 Watch Ricky Gervais Romance a 'Lady Gypsy' as The Office's David Brent
Next Up: Editor's Pick