After 25 years, are the Backstreet Boys still considered a boy band? A “man” band? A “dad” band? (All five members of the musical group — now in their late 30s and 40s — have at least one child.) For Nick Carter, Howie Dorough, Brian Littrell, AJ McLean and Kevin Richardson, whose new album DNA became their first release to top Billboard charts since 2000’s Black & Blue, labels aren’t important.

“I don’t care whatever they call us,” says Carter, referring to the ardent fans who have stuck with the group since their 1990s debut. “We’ve always called ourselves a vocal harmony group,” continues Littrell. “We’re singers first.”

That commitment to the fundamental nature of their act — five male pop vocalists making radio-friendly music — is what has buoyed them over more than two decades in music’s fickle landscape, from their early successes in MTV’s heyday through legal battles, personal conflict and, most recently, a sold-out Las Vegas residency. Now, they’re preparing to take the show on the road once more with DNA in a world tour this spring.

TIME sat down with the five artists to discuss their journey and the enduring power of their voices, which coalesce in DNA in new ways. Fans of their early hits will find a familiar sound in the syrupy harmonies of the single “Don’t Go Breaking My Heart,” while those seeking newer influences will be pleasantly surprised by “Chances,” which was co-written by Shawn Mendes, or “Passionate,” a funk-inflected track.

But for the Backstreet Boys, though the music may evolve, some things stay the same. “I think there is always going to be something nostalgic about a group like us,” says McLean. “We’re proud to come from an era of music that we feel is some of the best that ever came out. Late ’90s, early 2000s,” Carter adds. “I believe that people miss that era. I think they do want to relieve that nostalgic feeling. At the same time, [they want to] transcend with us, and that’s what we’re doing with them: growing with our fan base.”

As for the boy bands of today? One of the Backstreet Boys’ early challenges was developing global audiences before social media and democratized access to music made it easy. Carter recalls trying to break into other countries where English-language acts were not the norm. Today, all that’s changed. “BTS is doing the reverse in America,” he says of the famous K-pop group, “which I find extraordinary, because music can break boundaries, and I think that’s what we had done.” Their other pieces of advice: know your “lane,” stay passionate and — as McLean suggests — get a good lawyer.

“There were countless times that we could have easily thrown in the towel and just said, the heck with it,” McLean says. “But that wasn’t our destiny. Our destiny was to push forward, and our destiny was to come together as a group, and bond, and become closer. And to keep looking forward. So I mean, here we are, 26 years later. There’s a reason for that.” 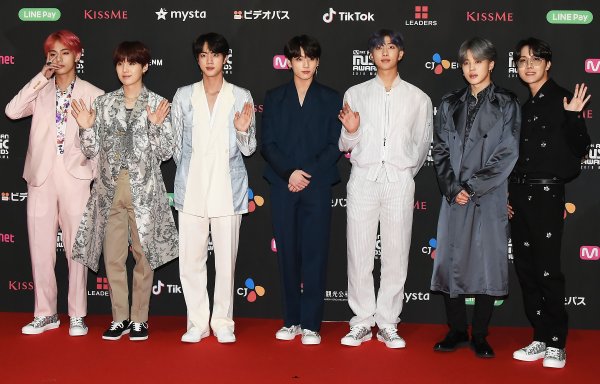 These Celebrities Are Already Fans of BTS
Next Up: Editor's Pick