The first pro-independence rally in Hong Kong history took place Friday in the shadow of the city’s main government complex, with thousands braving the subtropical humidity for the small but politically momentous, and peaceful, gathering.

The event, called by the fledgling Hong Kong National Party, was spurred by the banning of six pro-independence activists from standing as candidates in September elections to the city’s legislature. Amid a heavy but restrained police presence, the crowd heard 25-year-old Chan Ho-tin, the National Party’s defiant convenor, declare that his organization did not plan to remain on the sidelines but intended “to govern.”

Among the speakers was independence activist Edward Leung. “Hong Kong’s sovereignty doesn’t belong to Xi Jinping, the Communist Party, the Chinese or local governments – the sovereignty always belongs to us,” he said, according to local media reports.

When they first emerged on the Hong Kong political scene in the aftermath of 2014’s pro-democracy Umbrella Revolution, the city’s independence groups were blithely dismissed by establishment commentators as a dangerous, lunatic fringe.

That will be harder to do in the wake of Friday’s rally, where it was clear that the notion of a Hong Kong republic had struck a chord among people of different walks of life. The event was well organized and calm, with scores of the National Party’s maroon banners fluttering serenely from lampposts. Hong Kong police, whose estimates are notoriously conservative, put the attendance at 2,500. Organizers claim far more.

“If Hong Kong doesn’t become independent, our next generation’s well-being will be hampered,” a 30-year-old mother of two, who brought her children to the rally, told local media.

“They don’t respect us,” added 20-year-old student Mikel Fung, referring to China, which resumed sovereignty over Hong Kong when the territory of over 7 million inhabitants ceased to be a British colony in 1997. “Independence is the only way we can get back the life we enjoyed before 1997,” he told TIME. “We hate China.”

Hong Kong’s independence movement has grown in direct response to the failure of pro-democracy forces to wrest political concessions from the territory’s leaders, who, since the resumption of Chinese sovereignty, have been carefully vetted by Beijing.

The movement has also been fueled by what many see as Beijing’s growing encroachment on the territory’s freedoms. The recent extrajudicial detention in China of five staff members from a Hong Kong publishing house that specialized in printing works critical of Chinese leaders was seen as the most flagrant violation to date of the high degree of autonomy promised by Beijing to Hong Kong.

There can be little doubt that the central government will be furious at the Hong Kong gathering. China’s communist leaders have zero tolerance for secessionist movements in Tibet and Xinjiang, the latter home to Muslim Uighurs who chafe under Chinese rule. That Friday’s rally took place not among ethnic minorities in some far-flung province, but among Han Chinese in one of China’s showpiece cities, will infuriate them all the more.

Hong Kong’s pro-independence campaigners have already been told that they risk arrest for sedition. In the latest stark warning, a propaganda video released by China’s top prosecutors, the Supreme People’s Procuratorate, features Hong Kong democracy activist Joshua Wong, whom it accused of being in the pay of Washington. (Wong has not declared himself as pro-independence per se, but in an essay for TIME argued for Hong Kong’s right to self-determination.)

The independence movement appears undeterred. If anything, battle lines are hardening. “Peaceful demonstrations aren’t useful in Hong Kong anymore,” Y.T. Chan, a student, told TIME. “The situation under the Communist Party is only going to get worse.” 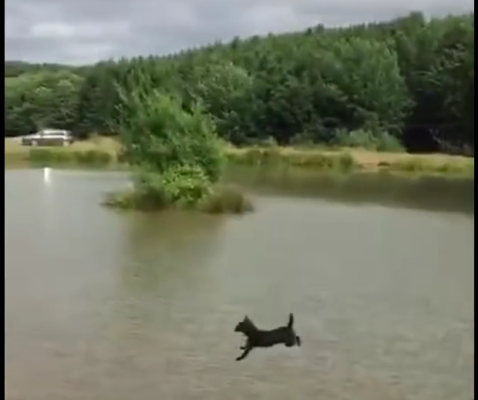 Watch A Dog Learn Why It Is a Bad Idea To Cross a Slip'N'Slide
Next Up: Editor's Pick