Protesters flooded the streets of Hong Kong Sunday to oppose a bill that would allow China to extradite fugitives from the semiautonomous region, bringing the busiest parts of the city to a standstill and drawing the largest crowds seen here since pro-democracy demonstrations paralyzed its center for months in 2014.

Critics fear the extradition bill would allow Beijing to round up opponents that live in or transit through Hong Kong, threatening the city’s judicial independence and further eroding its democratic freedoms. The former British colony was returned to China in 1997 under an agreement called “one country, two systems,” which granted it a high degree of autonomy for 50 years, but an increasingly assertive Beijing has called the deal’s integrity into question.

The Hong Kong government says the extradition bill is meant to plug “loopholes” in the current legal system, and it could be up for a vote before the end of June. If passed, Hong Kong could decide on a case-by-case basis whether to send fugitives to places including China, Macau and Taiwan, with which it has no formal extradition agreements. Taiwan has already said it won’t seek extradition if the bill is passed.

Organizers said more than a million people joined the march, which would make it the largest demonstration in the city’s history. In 2003, an estimated half a million people joined a march opposing proposed national security legislation outlawing offenses against the Chinese government, which is believed to be the second largest protest since the end of British rule.

“This bill amounts to the biggest political sellout of Hong Kong,” lawmaker Claudia Mo, a member of the Civic Party, told TIME. She was among the massive crowds that withstood sweltering heat and evening rains to protest. “It would completely destroy the ‘one country, two systems’ promise and put Hong Kong effectively under Chinese law.”

Extradition is just the latest flashpoint in the city as Beijing has sought greater influence in recent years, attempting with varying degrees of success to exert control over Hong Kong’s national security, education and electoral framework. Opponents of the extradition bill say they distrust China’s opaque legal system, whereby forced confessions, torture and closed criminal trials are commonplace, according to rights groups.

Shortly before the demonstration, the Hong Kong government said in a statement that the measure would not “in any way impact on, interfere with, or have a chilling effect on the freedom of assembly, of the press, of speech, of academic freedom or publication; or relate to offenses of a political nature.”

But the proposal has gridlocked the city’s Legislative Council, which is roughly divided between pro-democratic and pro-Beijing camps. The city’s business and diplomatic communities have expressed concern that the bill could undermine the rule of law, while Sunday’s march displayed widespread public opposition from a diverse cross-section of society, from pro-democratic political parties, to small business owners, to a network of housewives mobilized online.

“Today we’re using the sheer volume of people in attendance to make our message clear,” said a spokesperson for the Civil Human Rights Front, a coalition of pro-democracy groups that organized Sunday’s march. Organizers said more than a million people attended the march, while police estimated more than 150,000 were at the starting point of Hong Kong’s Victoria Park. Solidarity protests were also held in dozens of other major cities including Sydney, Toronto and Vancouver, organizers said.

Aerial images showed massive turnout, clogging up roads and overpasses for more than a mile in the densest parts of the city. Many protesters wore white T-shirts and waved red signs calling for the city’s Beijing-backed Chief Executive, Carrie Lam, to step down. Chants of “Hong Kong people, fight on!” rang through streets lined with skyscrapers. Despite the large crowds, the march was peaceful until authorities cleared the occupied government grounds after a midnight deadline. Some small clashes were reported between police and the mostly young protesters who remained; pepper spray and batons were used to disperse the crowds, which had been cleared from the streets by around 3 a.m.

Earlier in the day, some demonstrators held up bright yellow umbrellas, the emblem of the Umbrella Revolution in 2014, when tens of thousands of people occupied the financial district to demand free elections, ultimately without success. Large-scale protests in 2012 and 2014 were largely spearheaded by students, but the extradition bill has also grabbed the attention of Hong Kong’s business community, which fears it would weaken the rule of law essential to the success of the international finance center.

A U.S. congressional committee warned the bill would pose risks to U.S. security and economic interests, and the American Chamber of Commerce (AmCham), a non-partisan business chamber that counts at least 600 companies as members, has spoken out against the proposal. “AmCham has serious reservations about the Hong Kong extradition bill,” Tara Joseph, the president of AmCham in Hong Kong, told TIME. “It could have significant implications for Hong Kong’s reputation as one of the world’s most important business hubs.”

There have been other signs of Beijing’s tightening grip on the semiautonomous enclave. Press freedom rankings have dropped, a foreign journalist was expelled for hosting a talk with a politician who has advocated for Hong Kong’s independence from China, the leaders of 2014 pro-democracy protests have been jailed and a Chinese businessman was inexplicably abducted from a luxury hotel.

In 2015, five booksellers peddling salacious books about mainland politics disappeared; all of them eventually resurfaced in China. China said the men had voluntarily come to China to aid an investigation, but one bookseller, Lam Wing-kee, later spoke out after returning to Hong Kong, saying that he spent months in solitary confinement and had been forced to read a scripted confession admitting to selling banned books.

Lam has since fled to Taiwan, fearing what the law would mean for him. Speaking to TIME by phone a day before the march, Lam said the proposal would “target people like me,” adding that “if the amendments pass, I can be taken away at any time.”

“We’re not taking this lying down,” said Mo, the Civic Party lawmaker. “Even if we don’t achieve anything, we need to do this to be answerable to history; we are doing this for our children, the next generation, [so] there will be a record saying ‘they put up a heroic fight.'”

— With reporting by Kamakshi Ayyar and Laignee Barron / Hong Kong 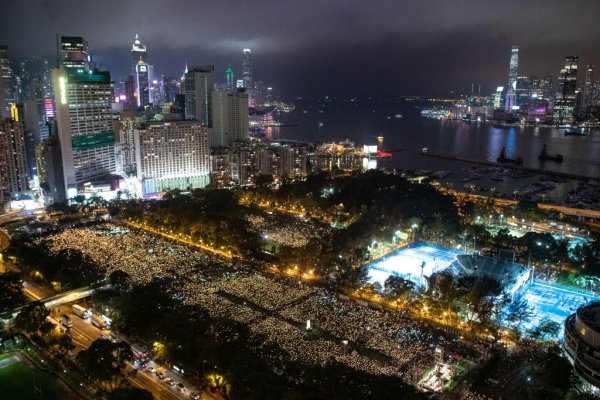