The United Auto Workers Union has reached a tentative agreement with General Motors to end the longest national strike involving the company in decades. But even if autoworkers vote to accept the proposal—which isn’t certain—it may be challenging for them to get some of the concessions they want most, experts say.

In addition to addressing concerns about wages and benefits, the strike is about getting assurances that unionized workers in the United States will continue to have a future at the company. Jobs are increasingly being given to temporary employees who face a difficult road to becoming permanent—or they are being sent to factories without unions or in other countries.

However, the global and national forces that created these problems may make it more difficult to achieve these goals, experts say. Years ago, unions used to have more bargaining power because more American plants were unionized, and controlled by the big three U.S. automakers: GM, Ford and Chrysler. Today, unionized workers are not only competing with the company moving factories to other countries, but with non-union plants in other states—many of which are operated by foreign carmakers.

John P. Beck, an associate professor at Michigan State University’s School of Human Resources and Labor Relations, tells TIME that employees are angry that while they made major sacrifices during the company’s 2009 bankruptcy, they don’t seem to be benefiting now that the company is more profitable. Plant closures, notably the shuttering of the Lordstown Assembly in Ohio in March, have deepened workers’ sense of insecurity and their concerns that the company does not appreciate its workers, Beck says.

The strike, which started on Sept. 15, is the longest GM work stoppage since the 1970s, but workers are so determined to achieve a better deal that they may opt to continue, says Beck. The new contract has not yet been publicly released, so rank-and-file members don’t yet know the terms.

“I think that there’s a strong resolve that I’m seeing—still. If this strike has to last longer, I think there are a great number of UAW workers at General Motors who are going to be supportive of continuing to stay on strike, even if it takes a little longer to get what they want,” Beck tells TIME.

Harley Shaiken, a professor with expertise in labor and globalization at the University of California-Berkeley, says that workers feel it’s time to seize a moment when profits are strong. “If you can’t win this back now, it’s not going to be easier four years from now” when they have to negotiate again, says Shaiken. “They want to share in and shape that future, not be left behind by it.”

It’s also an especially critical moment, says Beck, because both workers and the company executives are aware that there are major changes ahead for the auto industry. A future of electric vehicles and autonomous cars would fundamentally alter how factories operate, because they require different parts, production times and numbers of workers than gasoline-powered vehicles.

However, he says that everyone will have to wait and see what happens once the contract is released.

“Clearly, I think, there will be important gains in the contract. And workers have been out for a month. But the specifics of it mean everything, and until we see that, likely tomorrow, it’s hard to judge what the reception’s going to be or what’s going to happen,” Shaiken says. 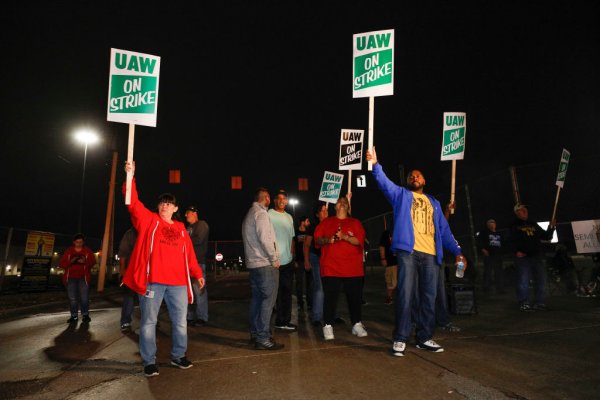 'Workers Are Tired and Frustrated and Angry.' Uneven Economic Growth Fuels Walkouts Like the GM Strike
Next Up: Editor's Pick