The GM Strike Isn't Just About Higher Wages. It's Also a Protest Against the Gig Economy

Union members at General Motors have joined a national uptick in strikes, with Americans increasingly turning to collective action in the face of unstable employment practices.

Unions have faced serious setbacks in recent decades, including a Supreme Court decision that crippled their fundraising ability, and “Right to Work” laws blocking mandatory membership. Membership has also fallen sharply, and the number of strikes has generally been dropping for years. In the last two years, however, there have been more strikes involving more workers. Striking workers spent about 2,815,400 days idle in 2018, up from 439,800 in 2017 according to the Bureau of Labor Statistics.

This weekend, union workers from one of the most iconic American companies, General Motors, joined their ranks for the first time 12 years, when some 49,000 General Motors (GM) members of the United Auto Workers union went on strike.

Union employees say that they are motivated by some of the same factors as striking workers of past decades, such as better wages and benefits. But some of their other demands—including a “defined path to permanent seniority for temps” and job security—are a product of a company that, according to the UAW, is increasingly sending jobs overseas and giving more work to temporary employees. In that respect, GM is no different to many corporations today.

Labor experts say that this strike comes at a time when some Americans, particularly the young, are becoming more sympathetic to unions and strikes. According to a 2018 Pew poll, 55% of Americans viewed unions favorably, compared to just 46% in 1985. Experts say that unions touch a nerve among many Americans about inequality and an increasingly unstable outlook for workers.

The United Auto Workers strike also comes after a very unusual period for GM. In 2009, General Motors was forced to filed for bankruptcy, but in the following decade the company experienced an impressive period of growth. Despite this success, the company shocked employees last fall by halting car production at five North American factories and cutting 15% of its workforce.

UAW Vice President Terry Dittes tells TIME that people across job sectors can relate to autoworkers’ fears about instability and supporting their families. When jobs are outsourced, Dittes says, it can have a ripple effect on people’s understanding on their roles in the workforce.

“When you see that kind of devastation, whether you’re union or your non-represented, it puts a fear in people. Well, if they can do that to them, what about me? And people experience that every single day,” Dittes says.

Both union and non-union workers are concerned about the quality and stability of jobs, Paul Mishler, an associate professor of labor studies at Indiana University, tells TIME. Wages for many workers have stagnated, and work is more likely to be temporary and offer poorer access to benefits. This sense of instability is likely to energize union workers and to increase popular support for unions, Mishler says.

“If we’re starting to be afraid that what happens to them is going to happen to us, we’re going to be more sympathetic to their efforts.”

UAW workers say that while many people assume that autoworker jobs mean high wages and good benefits, in recent years, the sector has often been characterized by chronic instability. As plants close, workers are sometimes forced to move repeatedly in order to keep their jobs. Many workers are hired on a temporary basis with weaker wages and benefits, and they must wait years until they can gain a more traditional role.

“Temporary used to mean summer help. A lot of college kids used to come and work summer help, cover vacations. And it just got abused throughout the years. And now they can keep them for years,” Patrick Anderson, who worked at the Warren Powertrain factory in Michigan, tells TIME.

Anderson has been a General Motors employee for 25 years, but his own experience hasn’t been any easier. Since General Motors unallocated his plant, he’s being transferred to a different facility – his seventh move in his career.

Anderson notes that the General Motors CEO, Mary Barra, is the daughter of an autoworker, and says that he wonders if she would have closed the plants if she had undergone a similar experience.

“I think if maybe her family had been through some of the disruption that I’ve had to deal with in my career, maybe she would feel differently about how she is handling this company in the workforce,” Anderson says.

Roland Zullo, a research scientist at the University of Michigan, believes that many people are likely to relate to union workers who are afraid of their jobs going overseas.

“A lot of folks identify with the need for keeping gainful employment here in the States,” Zullo says. “I think that was, frankly, one of the issues that determined the 2016 election.”

He adds that there’s a strong need for unions in contemporary American society as a result of inequality, and that support for unions has grown especially among the young.

What makes the General Motors strike unusual, Zullo argues, is the timing. Typically, he says, strikes occur after recessions—not when there are signs that the economy is slowing down.

However, the 2008 recession may still have lit the fuse for the strikes. Traditionally, he says labor unions capitulate to a company’s demands during a downturn with the expectation that they’ll reap the rewards of their sacrifice during better times. In this case, however, the company followed a successful period by closing factories.

“In a healthy labor relations context, there’s that understanding that when times are tough, everybody sacrifices. But when times improve, everybody shares, right?” Zullo says.

“For this particular strike, I think what happened is the union feels somewhat betrayed. Because they helped GM during the bankruptcy period by taking concessions. And then GM turned around and closed those plants.”

The original version of this story misstated Patrick Anderson’s employment status. He no longer works at Warren Powertrain; he is being transferred to another facility. 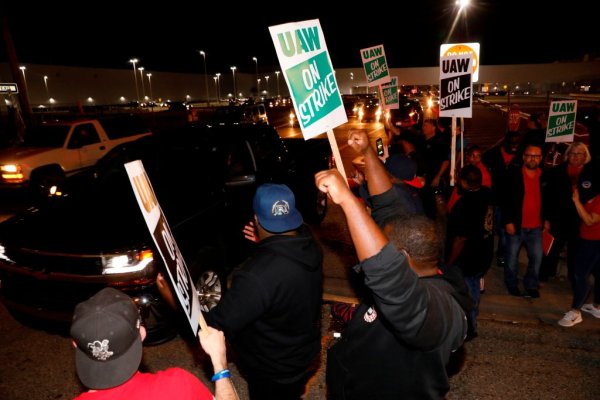 Here's Why GM Workers Are On Strike
Next Up: Editor's Pick