Aaron Paul on the Ending—and the Cameos—of El Camino: A Breaking Bad Movie

In the Breaking Bad finale in 2013, Jesse Pinkman escaped from his captors and achieved catharsis—but not resolution. “You’d like to think he’s riding off into the sunset, but you know life isn’t going to be that easy for him,” actor Aaron Paul, who plays Jesse, told TIME in a recent interview. “He’s probably on the run and in hiding.”

After six long years, we finally know what happened to Jesse thanks to El Camino: A Breaking Bad Movie, which arrived on Netflix on Oct. 11. The feature-length film shows Jesse receiving help from his old friends Badger (Matt L. Jones) and Skinny Pete (Charles Baker); ransacking Todd’s (Jesse Plemons) apartment for his cash stash; winning a gun duel against the man who built the harness that enslaved him; and finally resettling to Alaska with the help of Ed the Disappearer (Robert Forster).

Flashbacks also reveal key moments from Jesse’s past. In a conversation between Jesse and Mike (Jonathan Banks) that takes place around the time of the fifth season episode “Buyout,” the pair discuss where to go once they successfully flee Walt and his empire, with Mike suggesting Alaska. In a flashback to the show’s early days—during which Jesse and Walt (Bryan Cranston) are still cooking small batches in the RV—Walt suggests Jesse go to college after they get out of the drug business. Walt laments that he himself had to wait his “whole life to do something so special,” a small hint at his embrace of his heel-turn and the monster he will soon become.

The final cameo is the most heartbreaking: it features Jesse and his ex-girlfriend Jane (Krysten Ritter) discussing agency and free will during the events of season two. Jane tells him, “I’ve gone where the universe takes me my whole life. It’s better to make those decisions for yourself.” Unfortunately, her fate will be decided by someone else—Walt—when he lets her die even though he has the opportunity to save her.

Spoilers were excluded from the condensed version of TIME’s interview with Paul published ahead of the film’s release. Below, Paul weighs in on Jesse’s motivations in pivotal moments and his own reunions with old castmates from the AMC show.

TIME: El Camino goes deeper into the relationship between Jesse and his captor, Todd, and shows that their dynamic is perhaps more layered than the show depicted. What did you learn about their relationship?

Paul: You quickly realize there were so many things that happened behind closed doors that just simply didn’t make it onscreen. Especially with that Todd and Jesse dynamic, my god. As an actor, you try to come up with these backstories of what happened leading up to the moments that are on the screen, and realize obviously that a lot of torture went down. It’s very apparent with the scars and the cigarette burns all over Jesse’s face and body. Just a lot of sadness went on. To see a more detailed description of some of those moments is just so god-awful.

Jesse Plemons just does a brilliant job at playing all those subtleties. He’s such a sweet guy, but all of his roles he does are such interesting choices. I could tell he was having fun with this guy.

Where does Jesse Pinkman find the confidence to enter that one-on-one shootout at the film’s end?

That was all Vince [Gilligan]. He kept telling me, “Just go in there and have not a care in the world.”

My instincts were, “There’s gotta be some sort of hesitation there.” It actually took me a while to get to where it is now. Jesse’s just at a point where it’s like, “F-ck it! This is it.” He is holding a secret card, as well: the second gun. Also, Jesse is looking at him like: “You piece of sh-t, it’s you that made me trapped. You built this contraption that forced me to cook for these evil creatures.”

So in the moment Jesse is like, “You know what, I’ve gone through so much sh-t. If I die here, then so be it. But I’m not backing down.” Which I thought was incredibly brave, but maybe dumb.

Why is Alaska the right place for Jesse and what do you think about the decision to give him a true fresh start?

I think Mike was right when he said that Alaska is America’s final frontier. And it does feel that way. Alaska is just this beautiful, majestic, vast, glorious landscape. Why not just be surrounded by that beauty after being submerged in such utter poison for so long?

I thought it was such a perfect setting for his days: he needed something a little different. But I gotta tell you, Albuquerque desert gets frigid in the winter—like negative 25 degrees. I had some very cold nights.

What was it like filming with your old parter in crime, Bryan Cranston?

It was great revisiting a much better time in both of their lives, before much more darkness seeped in. I haven’t played that in a very long time—and it came back so easy for the both of us.

I just loved that moment where it’s kind of fun and games in this goofy partnership. But at the end, it’s just such a heartbreaking position that they’re both in, when Walt states that “You’re really lucky you didn’t have to wait your whole life to do something so special.” When I read that, it just broke my heart.

What’s in the letter that Jesse writes to Brock from Alaska?

My god, man. That letter. I gotta tell you, the letter was the first thing Vince wrote. In the original draft that I read, that’s how the entire end of the movie pans out: you hear the voiceover of the letter. It’s just the most honest, heartbreaking letter that I’ve really ever read.

But I’m going to keep that left to the unknown. Vince took it out for a reason. He wanted people to imagine what was said. 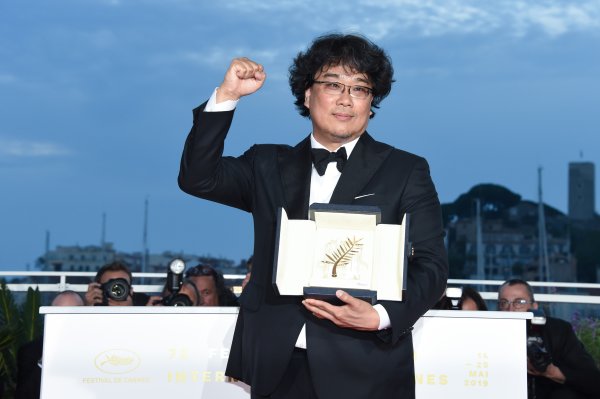 Bong Joon-Ho on Violence in Film and the Influences Behind Parasite
Next Up: Editor's Pick