Aaron Paul’s final moments on Breaking Bad are unforgettable. As the meth kingpin-turned-prisoner Jesse Pinkman, he speeds away from his captors in a Chevrolet El Camino, laughing and crying hysterically, his face a mess of unkempt facial hair and bruises.

The Breaking Bad finale aired six years ago, and Paul’s career has surged forward beyond the AMC drama: he starred in The Path, a Hulu series about a cult-like religion, and Need For Speed, an action movie based on the video game series of the same name. And he’s currently a part of two immensely acclaimed shows, Westworld (which he’ll join for its third season), and Bojack Horseman (which will end with its sixth season).

But Paul will never fully shake Jesse or his unresolved ending. “I lived this guy,” Paul tells TIME. And on Oct. 11, he steps back into the character in the Netflix film sequel El Camino: A Breaking Bad Movie, which picks up moments after that final scene and follows Jesse’s desperate bid for freedom out of Albuquerque’s meth-ridden streets.

In an interview, Paul talked about returning to the enduring role that earned him three Emmys and reconnecting with old friends on set.

TIME: How has your relationship with Jesse Pinkman changed over the years?

Paul: Anyone that’s a fan of Breaking Bad knows that all of these characters went through hell and back—especially Pinkman. It was a life-changing role for me, and there were a lot of ups and downs with this guy. In the first couple seasons, I tried to stay within that skin and stay as focused as possible. But [co-star] Bryan [Cranston] taught me that it’s okay to wash the makeup off at the end of the day and just be yourself. It was a bit of a struggle for all of us—it was an emotional toll. Playing Jesse was like revisiting an old friend.

Did you ever imagine what might have happened to Jesse after the show’s end?

I love the way the show ended—that it left it very vague. You’d like to think he’s riding off into the sunset, but you know life isn’t going to be that easy for him.

People, almost on a daily basis, ask me, “What happened to Jesse?” My response is, “I have no idea. In reality, he’s probably on the run and in hiding. His fingerprints were all over that murder scene.” But I fantasized that he was just living in the woods somewhere, maybe working with his hands again, creating things with wood.

The ending of Breaking Bad is widely beloved. Did you have any trepidation when creator Vince Gilligan asked you to star in a continuation?

Zero. I think any fan of Vince trusts him. He’s not going to do something for no reason. It was this itch that he just had to scratch; the one unanswered question that he was living with.

The movie picks back up with Jesse in a raw and traumatized state. How difficult was it to get back into such a fragile mindset?

Honestly, not at all. After I first read the script, I instantly felt all of those emotions running through me. Because everything you saw and didn’t see, I lived through these moments. It was incredibly easy to jump right back in.

The movie features several familiar faces from Breaking Bad. Did filming with them bring back a flood of memories from a bygone era?

Absolutely. Everyone had that same expression on their face when they’re walking onto set, and would just say, “This is so weird.” We’re in the same wardrobe; we look just slightly older.

How difficult was it to film this movie under the veil of secrecy?

It was incredibly easy, to be honest. On the weekends, when my wife, my baby girl and I would be running around town, people would come up to me and ask what I’m doing there. I would say, “I’m just doing this indie passion project.” And that was it: no one questioned it, not one time. We never had any people trying to sneak around any photos of the sets.

Do you think you’ve improved as an actor since you left the show?

Yeah. Just rewatch the show and you can instantly find out: I am definitely a better actor from when I began. But when you are working with material coming from Vince Gilligan, it’s nearly impossible to not spread your wings.

I’ve never taken an acting class: it was just trial and error, learning from my mistakes, forcing yourself to believe these situations that the characters are in. Sometimes you just get lost in these moments: You really feel like it’s actually happening.

Some actors think of really sad things that have happened in their life to stir up genuine emotion. I don’t want to mess with that—it feels too torturous. I try to separate myself completely from these roles that I play and just create all of these new moments.

It was recently announced that this season of Bojack Horseman will be the show’s last. What can you say about your character Todd’s closing arc?

All I can say is this season is just another punch in the gut of raw, honest reality. They’re just not afraid to take you down that road and make you laugh and cry and think. And I love that Todd, when you first meet him, seems like this sort of loser, this slacker. But you quickly realize he’s extremely articulate—he’s borderline genius in a way. He comes up with such idiotic ideas but I think is extremely profound at times. I think he’s the most mysterious character of the show.

You’re now filming another hugely popular and ambitious drama, Westworld. How do the universes compare?

I’m doing night shoots at the moment, and last night I worked until 7 a.m. My god, I wish I could tell you what we were doing last night. It was easily one of the most crazy, out-there moments in my entire career. 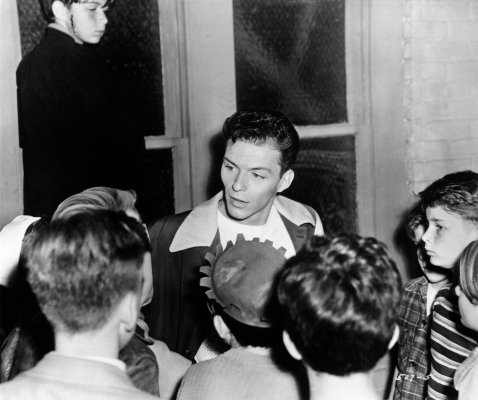 Read Frank Sinatra's 1945 Letter on Why Movies Are the 'Most Effective Weapon' Against Discrimination
Next Up: Editor's Pick