Trump Boasted That His Border Wall Was 'Virtually Impenetrable.' Then an 8-Year-Old Girl Climbed a Replica

When President Donald Trump announced that his signature wall at the U.S.’s southern border would be “virtually impenetrable” while visiting San Diego last month, Rick Weber, who co-founded the Muir Valley rock climbing park in Rogers, Kentucky, was listening.

Weber took the President’s claim as a challenge. He says he constructed his own replica of the wall, relying on the wall’s official dimensions as well as recent images of the structure. This weekend, Weber is planning to invite climbers attending the “Rocktoberfest” rock climbing festival at the nearby Red River Gorge canyon system in Kentucky to climb the model. Guests will be challenged to compete to climb up and over the wall in the fastest time.

Several people have already managed to climb up the wall replica, including 8-year-old Lucy Hancock. Hancock didn’t use any ropes or other tools to climb the wall, but wore a belay, a safety device designed to catch a falling climber. An adult climber, Erik Kloeker, was up and over the wall in about 40 seconds.

Lucy’s mother, Karla Hancock, tells TIME that her daughter has shown a natural inclination toward politics and rock climbing from a young age. Recently, Karla says Lucy has been interested in immigration, although the third-grader has found the national dialogue about immigration policy to be confusing.

“To her, it’s black and white: If somebody’s hungry, and you have the means to give to them, why couldn’t you?” Hancock says.

In 2017, the Government Accountability Office said that Customs and Border Protection had reported that there were 654 miles of fencing on the border. TIME reported in August that all the walls constructed so far this year have replaced older fencing, but last month Defense Secretary Mark Esper authorized a plan to reallocate $3.6 billion initially set aside for military construction projects to build Trump’s long-touted border wall without congressional approval for the funds. The Defense Department is now aiming to redirect $6.1 billion toward building 295 miles of wall since Trump declared a national emergency in February.

President Trump has said that 20 mountain climbers claimed the border wall design is difficult to climb, but Weber and other climbers have said that seems unlikely.

“We were all very puzzled because none of us in the climbing community had heard of these 20 people that had supposedly tried this wall,” Weber says.

The bollard-style wall at the border, which could also be described as a fence, consists of long, thin columns, with a flat panel that sticks up out of the top. Trump’s wall at the border will be 18 or 30 feet tall in different areas, and Weber says that he decided to construct the smaller, 18-foot dimension to save money. However, Weber says that since the top panel is the same size regardless of the wall’s height, the experience of climbing the higher wall should not be much more difficult, as climbers would only need to “shimmy” a bit further up the pillars.

Weber also says that he decided to allow the climbers to grab the edge of the top panel because he learned that this would be possible when climbing the actual border wall. According to Weber, he’s seen that there are gaps between each panel in photos of the proposed border wall.

Weber says that grabbing the panel’s edge makes climbing the wall a “piece of cake” for a climber. If there were no gaps, Weber estimates that climbers would need to be significantly taller than Lucy — at least about five feet 10 inches tall — to climb up and over the wall.

Weber says that he meant for the climbing competition to be fun, but also wants to point out that the border wall may be “ineffective.”

“I’m not making an argument that we shouldn’t have a secure border. I’m not doing that at all,” he says. “What I’m trying to do is to make sure that we’re not blowing a lot of money on some silly nonsense of putting up something that he thinks can’t be climbed. Because it can. And will be.” 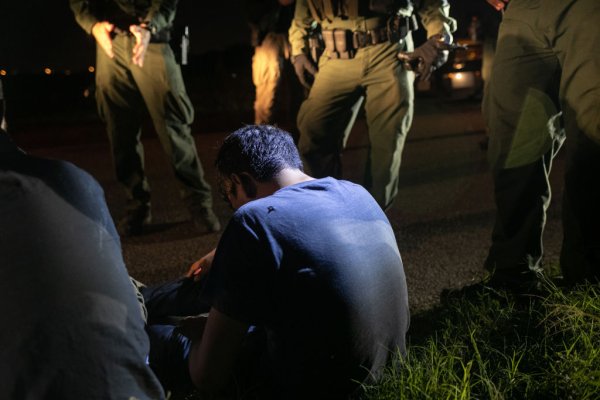 Nearly 1 Million Migrants Apprehended at Border in 2019
Next Up: Editor's Pick