Joe Biden trailed rivals Sen. Bernie Sanders and Indiana Mayor Pete Buttigieg in July, August and September fundraising, setting up what will be another round of questions about whether the former Vice President really is the best candidate to challenge President Donald Trump‘s re-election.

Elizabeth Warren has yet to announce her third-quarter fundraising haul, potentially adding another hiccup to Biden’s claim that he is the strongest Democrat in the field.

Biden recently told donors in Palo Alto, Calif., that his campaign was expected to announce a $15 million third-quarter fundraising number, according to Bloomberg. That’s off from the $21.5 million he raised in the second quarter as a brand-new contender. Most candidates see a donor drop-off during the summer lull, but any perceived dip to Biden’s aura of inevitability face high scrutiny, especially among activists and donors who, above all else, want someone who can defeat Trump.

It seems, though, that Biden made up for some serious lost ground in a final sprint. On Sept. 27 — ahead of the Sept. 30 deadline — he offered figures about how many donors had contributed and at what levels that suggested he was sitting at about $9.3 million for the quarter.

Biden is facing trouble coming at him from all corners. Trump is telling foreign governments that he wants to see them launch an investigation into Biden and his son Hunter Biden. Trump and the Republican National Committee are spending $10 million on a media campaign trying to frame the Bidens as corrupt and profiteers, and an ad submitted to CNN is seen as so misleading that the cable channel refuses to run it.

So under siege is Biden, his campaign on Thursday announced a $6 million ad blitz for Iowa, New Hampshire, South Carolina and Nevada to shore up the polling. That figure represents 40 cents of every dollar Biden spent the last three months collecting.

Biden aides did their best to project confidence.

“Today’s fundraising totals put the campaign in a strong position as we enter the fall,” campaign manager Greg Schultz said in an email. “The question any campaign faces at this point is whether or not you have the resources to compete in early states and sustain your efforts beyond. Our campaign unequivocally does and builds on our strength each week.“

Still, Biden lagged Sanders by $10 million and Buttigieg by $4 million in that July-September stretch. And Warren is already promising to fund a ground campaign in Maine to help defeat Sen. Susan Collins’ re-election bid — suggesting she, too, outpaced Biden.

At his fundraiser, Biden made no mention of how much cash he had spent or what he had banked. Neither did Schultz in his note. Those specifics aren’t due until Oct. 15 — which also happens to be the day of the next Democratic debate. It could be a very fateful day for Biden, who hasn’t exactly been a master debater yet.

Still, Biden entered the race atop the field and has stayed there.

“He hasn’t fallen,” noted one former aide who is unaffiliated with anyone this cycle. “The others just rose as people got to know them.”

The challenge for Biden will be to keep those competitors from becoming too buoyant before Iowa has its lead-off caucuses on Feb. 3. 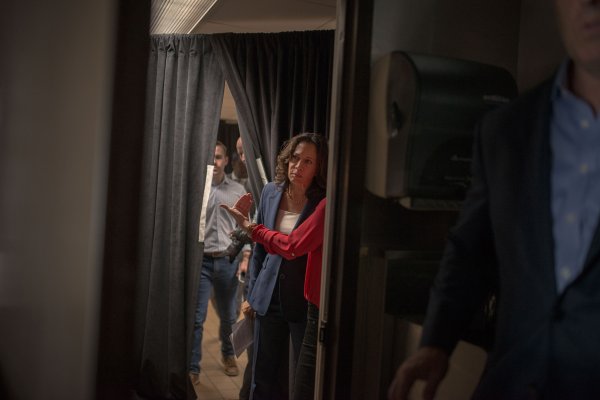 Kamala Harris Is Making Her Case. But Can She Stand Out?
Next Up: Editor's Pick