Joe Biden Is in the Headlines Over Trump’s Ukraine Call. He’s Trying to Leverage That

Joe Biden is doing something of a balancing act these days as he races for campaign cash ahead of a crucial deadline.

In the former Vice President’s telling, President Donald Trump is turning to foreign leaders in Ukraine to dig up or even manufacture dirt against Biden because he represents the biggest threat to a second term for Trump. In other words, a modified version of his rift that Biden’s the most electable Democrat in the field.

At the same time, Biden is also defending his own pressure campaign with Ukraine’s government. That leaves Biden running the risk that Trump’s underlying — and fact-free — theories about Ukraine might find a toehold in voters’ minds.

It’s essentially Biden saying “look at this” — but “please, pay no attention to that other part of the story.” Oh, and pony up.

So far, it seems to be working. Anecdotally, advisers say, it’s marshaling support from across the Democratic Party in an outrage that transcends the ideological differences in the field. The incident affords Biden a chance to cast himself as an unrivaled frontrunner who keeps Trump up at night, as well as a victim of Trump’s perceived abuse of power.

“Look, we have Trump scared. He isn’t calling on foreign leaders to investigate any other candidates,” campaign manager Greg Schultz wrote in a fundraising email.

It seems to be true. On Friday, the Trump re-election campaign and the Republican National Committee announced a $10 million national ad campaign against Biden, alleging Democrats were trying to use the call to Ukraine as a way to undo Trump’s 2016 victory.

All of this just happens to have come at one of the most crucial junctures in the campaign: the end of a fundraising quarter that will be the last money snapshot until all eyes have turned to Iowa and its Feb. 3 caucuses.

“Donald Trump is so terrified of Joe Biden that he tried to bully a foreign country into smearing him with a universally discredited conspiracy theory he cribbed from the right-wing fringes of the Internet,” Biden spokesman Andrew Bates tells TIME. “This ‘self before country’ politics is an affront to our national security interests and represents a low to which no American president has ever sunk. However, the desperation Trump exhibited in touching this scandal off means that he and Vice President Biden apparently do agree on at least one thing, which over 70 polls reinforce: in 2020 Joe Biden will beat him like a drum.”

In remarks to donors and emails to supporters, Biden has essentially blown past Trump’s unproven but nettlesome allegations that the former Vice President’s son, Hunter Biden, was under Ukrainian prosecutors’ scrutiny for corruption. Trump says the elder Biden stepped in to force that prosecutor from office to shield his son without offering evidence of this.

“Watching Donald Trump at the United Nations lying about your family,” read the caption in one Biden fundraising message featuring a picture of the former veep watching Trump on a television.

It apparently makes for potentially good fundraising. He’s approaching 350,000 individual donors and is almost to 670,000 total contributions, he said Thursday in Los Angeles. The average contribution, he said, was $46.

It’s unclear if Biden is talking about for the three-month quarter that ends on Tuesday, for the campaign as a whole, or if the numbers were even correct. Biden aides did not respond to requests for clarity.

— Taken as a whole of the campaign, that math would indicate Biden has raised about $30.8 million since he launched. Given he raised almost $21.5 through July 1, this could mean he raised $9.3 million over the last three months — a seemingly disappointing scenario given how much time Biden spends raising cash.

Biden had 256,000 donors last quarter, meaning he would have added fewer than 100,000 donors in the last three months under this scenario, and added about half as many donations as the 436,000 that he posted during the last quarter.

— The other — and better-for-Biden — alternative is that Biden raised the almost $31 million over the last three months alone. That would reflect well on his heavy schedule of fundraisers and suggest he is more than halfway toward the $100 million many strategists suggested will be needed to win the nomination.

Biden has until Oct. 15 to report his totals to the Federal Election Commission.

What is more immediately clear, though, is that Biden is trying to use the headline-dominating news that Trump talked about his family with the Ukrainians to drum up dirt and possibly connected U.S. aid to it. The challenge is that there are some facts — none illegal — in this scenario that could be a headache for Biden’s team in Philadelphia.

Hunter Biden joined the board of Urkanian energy company Burisma in 2014, while his father was the Vice President of the United States and the Obama Administration’s point-man on Ukraine. Hunter Biden drew a reported $50,000 a month salary for his advice on corporate governance and best practices. Both Bidens insisted they never talked about Ukraine, where the Vice President was pushing for reforms including the ouster of a prosecutor that at one point was looking in Burisma before Hunter joined it.

Joe Biden allies are quick to say that this wasn’t Biden freelancing when he sought to have the Ukrainians replace the prosecutor, which is similar to the U.S. Attorney General. Biden was communicating to Ukraine the set policy of the U.S. government, created through an interagency process with the National Security Council, that the ineffectual and possibly corrupt prosecutor be removed.

This, Biden aides argue, stands in stark contrast with Trump, whose suggestions that Ukraine open an investigation into the Bidens caught many Administration officials off guard. Also, in the view of Biden’s aides, Biden was pushing Ukraine to rid itself of corruption while Trump was looking to Ukrainian leaders to create trouble for a domestic political rival.

“Folks, this isn’t about me,” Biden told a group of about 130 donors on Thursday in San Marino, Calif. “It’s never been about me. It’s a tactic that’s used by this President to try to hijack an election so we do not focus on the issues that matter in our lives, in your lives.”

In a way, it also may allow Biden to hijack the race’s narrative — and ATM — in his campaign’s favor. If House Democrats move forward with impeachment proceedings and draw the spotlight from the campaign, this will keep Biden atop voters’ minds. It might just not be in an entirely positive light. 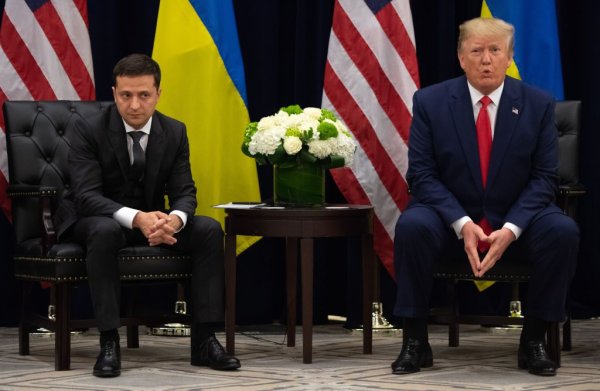 Ukrainian President Denies Trump Pressured Him
Next Up: Editor's Pick