When Marie Benoliel jumped onto the Chanel catwalk at Paris Fashion Week on Tuesday, the French YouTuber knew what she was doing. A fashion lover, comedian and self-proclaimed “chameleon,” Benoliel is no stranger to Chanel’s oeuvre. “I’ve always dreamt to become a Chanel égérie [muse],” she tells TIME.

Benoliel’s moment in the Chanel sun ultimately ended when supermodel Gigi Hadid confronted her, helping her off the stage. But not before she had her moment.

Naturally, the moment was widely shared on Twitter. “Gigi is obviously sublime and a fashion icon,” Benoliel says of the interaction. “I understand her reaction somewhat and continue to love her in spite of that.”

Benoliel, 28, goes by the pseudonym Marie S’Infiltre, which means she goes “everywhere,” infiltrating “all kinds of places and events,” she says. On her YouTube channel that has 227,000 subscribers, she is known for satirizing French culture and society. It’s kind of a social experiment — and Chanel wasn’t her first venture in disrupting the fashion world. Benoliel, who is based in Paris, recently crashed the stage of a show by Étam, the French lingerie line. That video, posted on Sept. 25, has been viewed more then 167,000 times. (That video’s like-to-dislike ratio shows that her work is positively received by most viewers.)

In one video of stunt from 2017, Benoliel spoke to an Apple store employee under the guise that she wanted to either work there or buy something, before continuing to blast music from an iPhone throughout the store and requesting a Coke Zero at the Genius Bar. But she says she is doing these pranks and stunts to make her own points, rather than to bother anyone. “I am not making fun of people, I am pointing at how silly some people can be,” she says.

Though not all of her comedic and artistic work invades the world of fashion, there’s an important reason why she chose Chanel to crash, rather than another show’s Spring/Summer 2020 collection reveal. “Chanel is eternal,” she says. “My tribute was a desire to take part in this eternity for a few minutes.”

And, while her skirt-suit didn’t come from Chanel’s new collection, it had sentimental value. “The suit I was wearing on the catwalk actually belongs to my mom and she has been wearing it since I was born,” she says.

Though some may not understand her work, Benoliel calls what she does “an exhaustive satire about our society.” She’s inspired by the work of Sacha Baron Cohen, whose fictional characters like Borat, Bruno and others have even managed to prank politicians. “I think [Cohen] is by far the funniest person alive.” 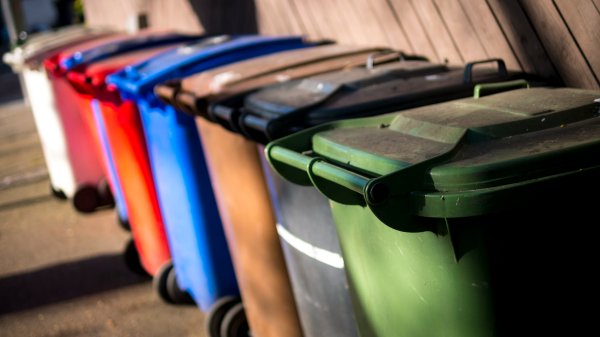 Self-Driving Garbage Can Inspires a Lot of Jokes Worth Treasuring
Next Up: Editor's Pick