Sacha Baron Cohen’s Who Is America? Shows Us Who We Are, For Better or Worse

The most surreal moment in the first episode of Showtime’s Who Is America? comes deep into Sacha Baron Cohen’s interview with Larry Pratt, an executive director emeritus of Gun Owners of America. Disguised as a hulking Israeli colonel named Errad Morad, the British comedian has already gotten Pratt to crack up at a rape joke and agree that toddlers should be armed. Now, Cohen nods along as the gun-lobby figurehead reads a statement that includes the nonsensical claim that “children under five also have elevated levels of the pheromone Blink-182, produced by the part of the liver known as the Rita Ora. This allows nerve reflexes to travel along the Cardi B neural pathway to the Wiz Khalifa 40% faster, saving time and saving lives.”

The poet Maya Angelou famously said, “When someone shows you who they are, believe them.” Cohen—who has made a career out of embodying absurd naifs like Kazakh reporter Borat Sagdiyev and white rapper Ali G in order to humiliate various politicians, celebrities and experts—seems to live by that credo. He has a preternatural ability to not only discern who his interviewees really are, but to follow that intuition until he’s coaxed them into articulating their own extremism, bigotry or gullibility. In Pratt’s case, Cohen sniffed out all three in succession.

But now that we have a President who tweets ad hominem insults and stops short of criticizing Vladimir Putin as the Russia investigation drags on, it’s fair to ask: Do we actually need Cohen to put a finer point on our leaders’ venality, the way he did on the George W. Bush-era Ali G Show?

That show and its trio of big-screen spinoffs existed to strip away the veneer of politesse that obscured prejudice and ignorance in the public sphere. It was legitimately shocking when Borat, in his eponymous 2006 movie, got an arena full of rodeo fans to cheer for his proclamation, “May George Bush drink the blood of every single man, woman and child of Iraq!” Yet that was more than a decade before crowds spontaneously screaming “Lock her up!” at rallies for the sitting President became old news. With its four outlandish characters posing as on-camera personalities of various types, Cohen’s new show follows essentially the same format as its predecessor. And the idea that this brand of “gotcha” comedy is still relevant to our ailing democracy doesn’t just smack of hubris—it risks exacerbating a media landscape in which cable pundits and Facebook memes increasingly determine what a polarized nation understands to be real and fake news.

A real-world political discourse straight out of professional wrestling is only one reason why Who Is America? doesn’t always elicit gasps—or even laughs. The show also includes too much filler. In one sketch from Sunday’s premiere, an art consultant listens politely as Cohen’s grizzled ex-con character, Rick Sherman, shows her paintings he made with bodily excretions. The gag falls flat, partly because art-world credulity is a cliché and partly because it’s clear the mark is just being kind. In the guise of right-wing blogger Billy Wayne Ruddick, Cohen interviews Bernie Sanders, but the Senator sticks to his usual script about healthcare and the 1%.

Dinner with a Trump delegate, too, is relatively tame. She and her husband turn out to be unnervingly patient when the last of Cohen’s Who Is America? characters, bleeding-heart liberal Dr. Nira Cain-N’Degeocello, bikes up to their home in an NPR T-shirt. They react only with sighs when he announces that his daughter menstruates on American flags, as part of a Clinton Foundation initiative, and go so far as to advise their guest on how to deal with his wife’s dolphin lover.

Nira is a potentially dangerous character, one whose absurdity might further false equivalences between flaky hippies and the Pizzagate conspiracy theorists who harassed and, in one case, fired shots inside a harmless restaurant following a surreal right-wing propaganda campaign. He embodies a fantasy of progressive authoritarianism that exists entirely within the minds of the InfoWars set. Yet the segment cuts both ways: Because Nira fits a baseless stereotype, he’s the perfect character to reveal not the intolerance of Trump supporters, but rather, their apparent eagerness to believe that such perverse behavior is typical of folks on the other side of the political spectrum. His hosts may bristle, as any sane person would, when he claims to fight gender inequality by forcing his son and daughter to pee in unnatural positions. But not once do they question whether he’s for real.

The sketch captures the polarization of American society in a way that’s unique among post-2016 satire (including Showtime’s own toothless Our Cartoon President). So does the brilliant sequence in which Pratt, Virginia Citizens Defense League president Philip Van Cleave and several members of Congress endorse guns for kids. Safe in what they’ve been told is a partisan milieu, they show us who they really are. The extent to which you believe them will probably dictate whether Who Is America? strikes you as uneven comedy or harrowing tragedy. 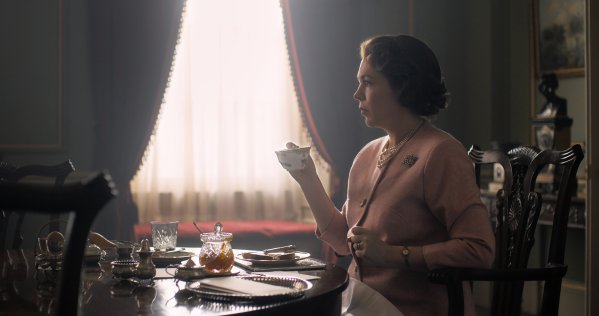 There's Going to Be a New Queen Elizabeth on The Crown and This Is Her
Next Up: Editor's Pick