How Long Could the Trump Impeachment Process Last? Use Our Interactive Timeline to Find Out

In the one week since Speaker Nancy Pelosi consecrated the long-running impeachment groundswell in the House, Donald Trump’s presidency until now has felt like a political adaptation of “Papa Was a Rollin’ Stone.”

The 12-minute Motown opus, rearranged for The Temptations from the original in 1972, has one of the longest intros in pop music history, beginning with a portentous bassline and glacially unfolding as the remaining instruments join in, one by one. Finally, after 3 minutes and 53 seconds, singer Dennis Edwards delivers the opening line: “It was the third of September.”

He was off, it turns out 47 years later, by exactly three weeks.

The impeachment bassline has been thumping since the day Trump took office. With the long prelude now over, we’re in an indeterminate period of legal brinkmanship and parliamentary chess. This will inevitably draw attention away from the Democratic nomination and early forecasting for the general election for some duration, keeping Trump in an even brighter spotlight than usual. How long the prospect of impeachment and trial loom will dramatically reshape the political terrain in 2020.

How far into the 2020 election might the impeachment process continue? The following interactive allows you to manipulate the length of the four possible stages of an impeachment: The Congressional investigation, which is currently underway; the full House vote on articles of impeachment; the delay before the Senate trial begins (if impeachment proceeds); and the length of a prospective trial itself.

The figures you see at the beginning are based on Clinton and Nixon’s impeachments, and presuppose that Trump is impeached and faces a Senate trial. You can short-circuit the process with the checkboxes below each slider.

As you can see, the proceedings could either fizzle before the Iowa caucuses on Feb. 3, 2020, or extend through, or even past, the general election. The duration of the investigation and how long the Senate sits on any prospective impeachment articles are the largest sources of uncertainty. This is where Democratic and Republican leaders in the House and Senate respectively have extraordinary leeway to set the metronome.

Given that the sample size of serious Presidential impeachment proceedings in the past half-century is a whopping two, we don’t have a lot of data from which to draw upon for clues as to how long any step in this process might take.

The first variable is particularly tricky. By the time the House formally starts an impeachment investigation, a combination of panels, hearings and independent counsels have usually been at work on the matter for well over a year. How does one assign a birthday to an impeachment process?

“If one is looking for a bright line, I think it has to be when the House as a whole refers the impeachment investigations to the House Judiciary Committee,” says Alan Baron, an attorney who has worked for said Committee on the four most recent impeachments of federal judges — three of which resulted in Senate convictions and one in which the accused judged resigned between his impeachment and trial.

It does not appear that Speaker Pelosi will draw such a bright line this time. As The New York Times reported last week, the Democratic leaders “do not intend to hold a vote on the House floor to authorize the proceedings, as has been done in the past.” Also unlike most impeachments, the House Intelligence Committee is reportedly leading the investigation, while the Judiciary Committee “will temporarily idle the public aspects of its inquiry.”

Short of a House vote, Pelosi’s Sept. 24 endorsement of impeachment proceedings serves as the closest thing to Baron’s bright line. Several lawmakers have projected that there could be an impeachment vote in the House by the end of the year, three months from today.

That’s longer than it took to draft articles of impeachment against Clinton. In his case, the House voted to proceed with impeachment inquiries on Oct. 8, 1998, and voted to refer two of the four articles to the Senate on Dec. 19, 72 days later. Clinton’s Senate trial began 19 days later and lasted for 36 days.

In Nixon’s case, the House similarly gave the Judiciary Committee its blessing to pursue articles of impeachment on Feb. 6, 1974, which led to a three-day committee vote beginning July 27, a 171-day process. Nixon resigned before the House could vote on the articles. So, technically, he was not impeached.

Averaging the committee investigations of Clinton and Nixon to about 120 days, and then plugging in the Senate delay and trial duration for Clinton — the default settings in our above interactive — a Senate trial of Trump would hypothetically occur right as the Democratic primary got underway, subsuming Super Tuesday on March 3, 2020.

But there’s a big difference between this impeachment process and the two most recent other examples. Both Clinton and Nixon faced two chambers of Congress controlled by the opposite party. In Trump’s case, Democrats control the House, and thus the first half of the process, while Republicans control the Senate, and thus set the timer on the second, should it get that far. Senate Majority Leader Mitch McConnell said Monday that if the House impeaches Trump, he would have “no choice” but to hold a trial under Senate rules. But he added: “How long you’re on it, is a whole different matter.”

Given that even McConnell doesn’t claim to know how long this might take, our interactive allows for considerable room to extend each stage, with arbitrary upper bounds of 500 days for the investigation and delay, 30 days for the House vote and up to 120 days for the Senate trial.

Few people dispute that impeachment is a political process more than a legal procedure. Both Clinton and Nixon weathered impeachment in their second terms, where the more exigent liability was the final midterm election of their term. Not since Andrew Johnson, who was neither elected nor even nominated, has an impeachment process been so dramatically interwoven with an incumbent president’s campaign. The processes of impeaching a president and electing one are on a collision course. We just don’t know the velocity — yet. 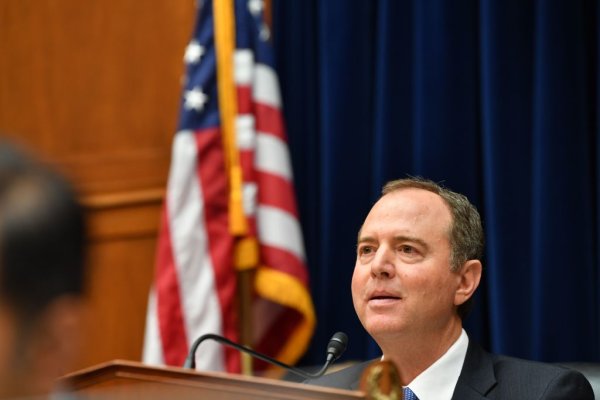 All Eyes on Schiff
Next Up: Editor's Pick