By Alana Abramson and Lissandra Villa

Speaker Nancy Pelosi announced Tuesday that House Democrats would launch an impeachment inquiry into President Donald Trump, an extraordinary step that came in the wake of a whistleblower complaint that Trump sought to pressure Ukraine to investigate a political rival for personal gain.

“The President must be held accountable,” Pelosi said in a televised statement outside her office on Capitol Hill, against a pointed backdrop of six American flags. “No one is above the law.”

After months of wavering, House Democrats have inched closer and closer in recent days to beginning a full-fledged impeachment process. On Tuesday the floodgates finally opened. A rapidly growing number of lawmakers who previously had reservations about impeachment came forward in support of launching proceedings.

For this crop of Democrats, Trump had finally crossed a red line. “When the news broke this past weekend about the issue … to me that was so egregious and beyond the pale and so cut and dry that there was no alternative,” Rep. Dean Phillips, who along with his Minnesota delegation colleague Rep. Angie Craig called for impeachment on Monday, told TIME. Both are from moderate districts.

Many Democrats argued that if they did not take action, they would be failing to uphold their duties. “If Congress does nothing, then we aren’t standing up for the most basic constitutional values, and what I fear is not for Democrats, what I fear is for the standards of our democracy,” Rep. Ro Khanna told TIME.

The Intelligence Committee in the House of Representatives has been seeking the complaint, but the acting Director of National Intelligence, Joseph Maguire, has not provided it to them, despite regulations mandating that he should have. Democrats have been calling for Maguire—who is slated Thursday to appear in an open hearing before the House Intelligence committee and a closed hearing in the Senate—to release the complaint, and have been pushing to read a transcript of the phone call between Trump and Zelensky.

On Tuesday afternoon, Trump tweeted that he had authorized the release of a declassified and un-redacted transcript of that conversation. But Democrats are unlikely to be satisfied until they get the complaint itself. Rep. Adam Schiff, the House Intelligence chairman, announced that his committee had heard from the whistleblower’s counsel that the whistleblower was interested in testifying before the lawmakers, a development that could come “as soon as this week.”

At least one House Democrat has requested that Congress not only get to see the complaint and the transcript of the call between Trump and Zelensky, but also listen to the audio.

“Not only do we need to see the complaint and the transcript, we need to hear the audio of the conversation to appreciate the nuance of the President’s comments to President Zelensky [and] the kind of pressure he was imposing,” Rep. Jackie Speier, a member of the House Intelligence and Oversight Committees, told TIME Tuesday.

House Republicans were quick to denigrate Speaker Pelosi for the announcement, claiming it was yet another indication that the Democrats just want to re-litigate 2016, despite the fact that the complaint centers on Trump’s Oval Office tenure.

“This election is over. I realized 2016 did not turn out the way Speaker Pelosi wanted it to happen, but she cannot change the laws of this Congress,” Republican Minority Leader Kevin McCarthy told reporters in a brief statement in the capitol. He and his top deputy, Minority Whip Steve Scalise, did not take questions from reporters.

Senate Republicans were similarly dismissive of Pelosi’s announcement, with McConnell framing it as an inability to control the different factions in her party. ““Speaker Pelosi’s much-publicized efforts to restrain her far-left conference have finally crumbled. House Democrats cannot help themselves,” he said in a statement. “Instead of working together across party lines on legislation to help American families and strengthen our nation, they will descend even deeper into their obsession with relitigating 2016.”

There were, however, signs that the Senate is taking the whistleblowers’s complaint seriously. The Senate unanimously approved a resolution from Minority Leader Chuck Schumer Tuesday that the whistleblower’s complaint should be transmitted to the House and Senate intelligence committees, something McConnell said should have given Pelosi more pause.

“[The endorsement] comes despite the fact that committee-level proceedings are already underway to address the whistleblower allegation through a fair, bipartisan, and regular process,” McConnell said in his statement.

Democrats met as a caucus Tuesday afternoon to discuss the allegations, with some members going into it expecting the conversation to center not around whether they would pursue impeachment so much as how. In particular, the excitement came from reports that Pelosi, who for months has been reluctant to go down the path toward impeachment without all the evidence and bipartisan political support, had been taking the temperature of the caucus. But, according to one lawmaker in the room, Pelosi merely told lawmakers that they could call the investigative work an impeachment inquiry. “It doesn’t change much from what is already going on,” she told them.

Lawmakers who have been pushing impeachment action for months gloated over their foresight. “I think we’ve been building, and I don’t know if this is the last straw, the one that’s going to break the proverbial camel’s back, but I do know its a straw that’s having an impact,” Rep. Al Green, who has unsuccessfully introduced articles of impeachment several times since Trump took office, said Monday at the Capitol.

Aides to moderate House Democrats, who requested anonymity to speak candidly about internal dynamics, said members’ newfound support for impeachment was not the result of political pressure but rather the substance of the allegation itself. The prospect of a U.S. President using his office to pressure a foreign nation into investigating a political rival was easier to explain to voters, they said, than the allegations of obstruction of justice from the Mueller report, which many Democrats found too complex to synthesize coherently to their constituents.

“Building a big puzzle together on obstruction is hard to do in 30 seconds,” explained one senior Democratic aide in the moderate wing of the party. “Saying fundamentally you believe that American President brings in a foreign power to try to influence an election and ensure your own survival and not put the country first [is not].”

Whether impeachment will help or hurt Democrats politically is an open question.

“I think there’s a liability for Democrats if we don’t pursue impeachment from base voters and even moderate voters, and I think they are not going to appreciate the fact that we’re showing weakness when the president is essentially extorting other countries,” said Rep. Ruben Gallego. “There’s no other way to really frame that. At some point we have to worry about where this country is going for the next 100 years and not the next two years.”

Write to Alana Abramson at Alana.Abramson@time.com and Lissandra Villa at lissandra.villa@time.com. 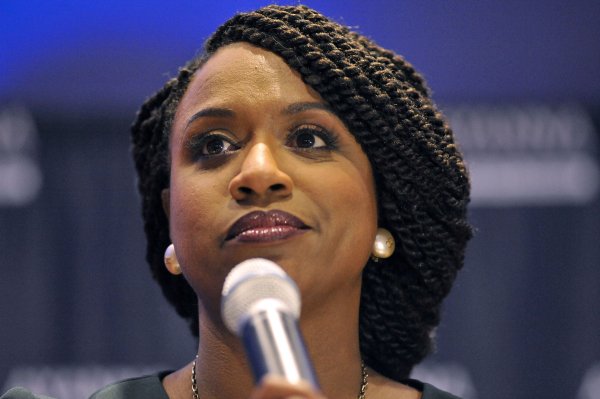 Rep. Ayanna Pressley Declines to Weigh in on Kennedy vs. Markey Primary Battle. 'The Electorate Will Decide'
Next Up: Editor's Pick