On Tuesday, the remaining presidential candidates will pin their hopes on contests in about a dozen states, depending on the party, from Alaska to Alabama. The results of “Super Tuesday” could mean the end of the line for some candidates, and just one more step in a long fight for others.

When did Super Tuesday become a thing? Voting on that day of the week is an old tradition in the U.S., but the 1976 election is often credited for leading to the first recorded uses of that particular phrase (here’s one example, from the New York Times, in which it’s hyphenated). TIME’s earliest usage came the following primary season, in 1980. That year, Sen. Edward Kennedy set his sights on a day when eight states voted in his ultimately unsuccessful bid to replace President Jimmy Carter as the Democratic nominee. After that, the phrase was in increasingly common use.

The more interesting question is why. Considering the amount of attention that goes to the states with early caucus and primary dates, like Iowa and New Hampshire and South Carolina, why would so many states opt not to get their own days in the sun?

One reason, as explained by Barbara Norrander in the appropriately titled book Super Tuesday, is that the Democratic party was suffering in the South. Norrander traces the beginning of Super Tuesday as an institution to 1988, when the party got fed up with a decades-long pattern. Every nominating contest, it seemed, resulted in non-Southern Democrats—who generally voted earlier—giving crucial momentum to a candidate who ultimately couldn’t win in that region. If Southern states held their primaries all together, on a relatively early day, the reasoning went that they would have more influence on the eventual nominee. So in the lead-up to 1988, many of those states—or at least the ones where Democrats had enough say in the state legislatures—scheduled their primaries for the same day, Mar. 8. (A couple of Northern states would vote on that day, too.)

The rationale made sense. Except it didn’t work–at least at first.

Massachusetts Gov. Michael Dukakis wound up appearing on more primary ballots on Mar. 8, 1988, than JFK did in his entire campaign for the White House. And then the Northeastern Democrat got creamed in the general election, which was a landslide for Republican candidate George H.W. Bush. But Super Tuesday stuck around. And in 1992, the notion that led to its creation finally paid off: Bill Clinton, who swept the Southern Super Tuesday contests, went on to win the White House thanks in part to general election victories in several Super Tuesday states. 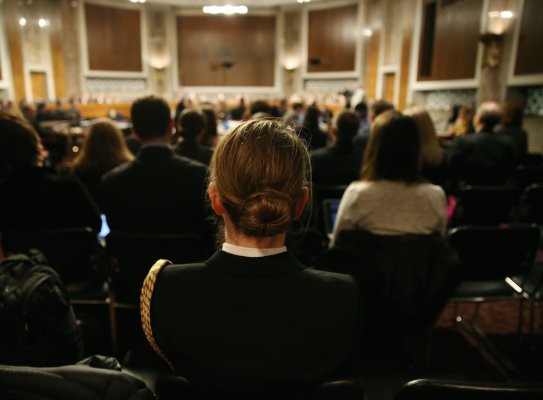 Rubio and Cruz Wade Into Long History of Whether to Draft Women
Next Up: Editor's Pick