Teen climate activist Greta Thunberg on Wednesday was named one of the 2019 recipients of the Right Livelihood Award, known as the “Alternative Nobel Prize,” days after imploring world leaders to take the threat of climate change more seriously in an emotional speech at the United Nations.

Thunberg, 16, received the prize from the Stockholm-based Right Livelihood Foundation — established in 1980 after the Nobel Foundation rejected a proposal to create an environmental prize — for “inspiring and amplifying political demands for urgent climate action reflecting scientific facts.”

The other 2019 Right Livelihood laureates are Aminatou Haidar, a human rights advocate from Western Sahara; Guo Jianmei, a lawyer defending women’s rights in China; and Davi Kopenawa, an indigenous leader in Brazil fighting for indigenous rights and rainforest conservation. The award includes a cash prize of about $103,000.

“I am part of a global movement of school children, youth and adults of all ages who have decided to act in defense of our living planet,” Thunberg said in a statement. “I share this award with them.”

During the past year, Thunberg has earned international attention for her solo protests over climate inaction that grew last week into a global strike that drew an estimated four million participants around the world.

Thunberg has been nominated for the Nobel Peace Prize as well, but her candidacy is controversial to some, in part because of her willingness to call out political leaders and shame those who travel by airplane, Reuters reported. If she is selected next month, Thunberg would become the youngest person ever awarded a Nobel Prize — a distinction currently held by Malala Yousafzai, who received the Nobel Peace Prize when she was 17.

“You all come to us young people for hope. How dare you?” she said. “You have stolen my dreams and my childhood with your empty words, and yet, I’m one of the lucky ones. People are suffering. People are dying. Entire ecosystems are collapsing.” 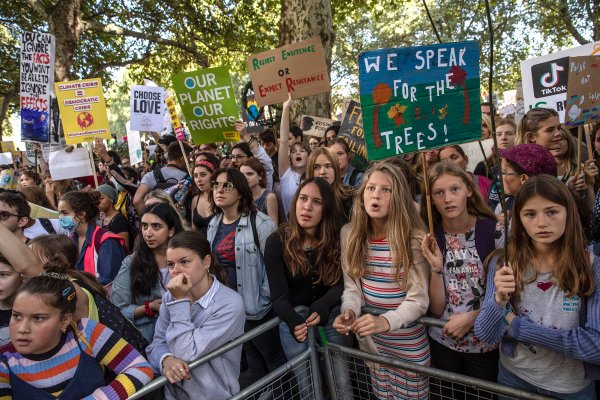 See the Massive Climate Protests Around the World
Next Up: Editor's Pick