Swedish environmental activist Greta Thunberg has been nominated for a Nobel Peace Prize in recognition of her work leading a youth campaign to halt climate change.

“We have nominated Greta because the climate threat may be one of the most important causes of war and conflict,” parliamentary representative Freddy Andre Oevstegaard told Norwegian media outlet VG.

“The massive movement Greta has set in motion is a very important peace contribution,” he added.

The activist, who was named one of TIME’s Most Influential Teens of 2018, has inspired hundreds of thousands of students at schools around the world to hold strikes in an effort to urge their leaders to act.

According to a U.N. report, global temperatures could rise by 1.5°C, a threshold that scientists say will bring dire consequences to the planet, by as early as 2030 if greenhouse gas emissions continue at the current rate.

In December 2018, Thunberg spoke at the U.N. Climate Change Conference in Poland, where she called out lawmakers and government bodies for their inaction.

At a World Economic Forum meeting in Davos, Switzerland, in January, she ended her speech by telling a silenced room that she wants leaders to “behave like our house is on fire, because it is.”

As part of the #FridaysForFuture movement headed by the activist, tens of thousands of young people around the world will be skipping school this Friday to march for change.

Thunberg said on Twitter that almost 100 countries will be involved.

“I think we are only seeing the beginning. I think that change is on the horizon and the people will stand up for their future, Thunberg said in an interview with the Guardian. 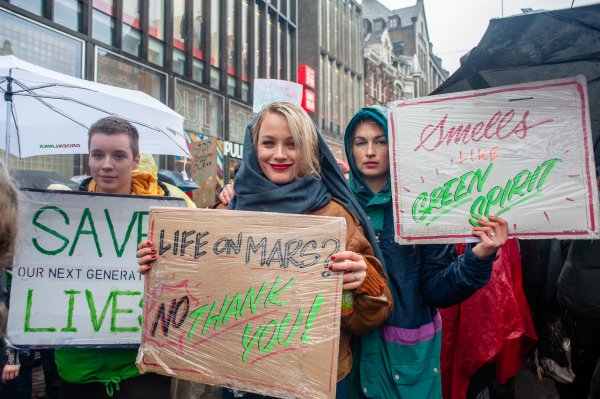 Climate Change Protest in Amsterdam Draws 40,000
Next Up: Editor's Pick