'You Have Stolen My Dreams and My Childhood': Greta Thunberg Gives Powerful Speech at UN Climate Summit

In an emotional speech at the United Nations during the Climate Action Summit on Monday, the 16-year-old Swedish climate activist Greta Thunberg appealed to world leaders about the grave need to stop the effects of climate change.

“You all come to us young people for hope. How dare you?” she said. “You have stolen my dreams and my childhood with your empty words, and yet, I’m one of the lucky ones. People are suffering. People are dying. Entire ecosystems are collapsing.”

Thunberg grew tearful, as she continued to condemn what she sees as the lack of action on part of leaders around the world to halt climate change. “We are in the beginning of a mass extinction and all you can talk about is money and fairy tales of eternal economic growth. How dare you?”

The 2019 Climate Action Summit kicked off at the UN on Monday, where world leaders gathered to discuss serious strategies to mitigate climate change. Representatives of participating nations were told by U.N. Secretary General Antonio Guterres to come up with “concrete, realistic plans” to further their commitments to reducing greenhouse gas emissions and get to net zero emissions by 2050.

Thunberg cited more than 30 years of scientific evidence showing the consequences of a perpetually warming globe and delivered searing criticism of politicians who were aware of the science, but still did nothing.

“You say you hear us and that you understand the urgency. But no matter how sad and angry I am, I do not want to believe that,” she said. “Because if you really understood the situation and still kept on failing to act, then you would be evil, and that I refuse to believe.”

Thunberg spoke at the UN following her appearance at the Global Climate Strike in New York City on Friday where she addressed the crowd of protestors, saying, “Our house is on fire. We will do everything in our power to stop this crisis from getting worse.”

Speaking to the world leaders at the climate summit Monday, Thunberg echoed her earlier message and offered a warning. “You are failing us. But young people are starting to understand your betrayal. The eyes of all future generations are upon you, and if you choose to fail us, I say, we will never forgive you. We will not let you get away with this.” 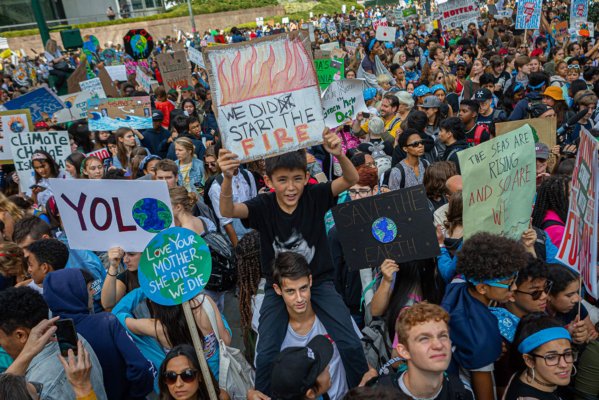 In the 1980s, the World Acted to Save the Ozone Layer. Here's Why the Fight Against Climate Change Is Different
Next Up: Editor's Pick