As the head of the United Nations, Secretary-General António Guterres works to solve the world’s thorniest issues from humanitarian crises to international terrorism knowing that the nature of these conflicts prevents any definitive resolution.

But climate change is different, he tells TIME.

As populist leaders around the globe have sowed doubts about multilateral institutions like the U.N., Guterres says that climate change, perhaps the biggest collective action problem, offers an opportunity like no other issue for the system to “prove its value.”

“We are involved in the prevention of conflicts, and we are involved in trying to solve Libya, Yemen, Syria, South Sudan. But those are areas in which what we can do is limited,” he said in a May 22 interview at the U.N. headquarters in New York. “Climate change is for me, clearly an area where the U.N. has the obligation to assume global leadership.”

Photograph by Christopher Gregory for TIME

Average global temperatures have risen 1°C since the start of the industrial era. And they will rise to about 3°C by the end of the century without new policies, according to an analysis from Climate Action Tracker.

Nonetheless Guterres says the system is working, pointing to the landmark Paris Agreement, agreed to by nearly 200 countries in 2015. In the lead up to that deal, countries announced concrete plans to reduce their emissions. In the agreement itself, they committed to work to keep temperature rise to “well below” 2°C and ideally to 1.5°C. Guterres also cited last year’s climate talks in Poland, where countries agreed on the rules to implement the deal, as an example of the U.N. bringing countries together to fight global warming.

Guterres hopes that the climate summit he is hosting this fall will be another opportunity for the world to tackle global warming — and this time bring commitments to reduce emissions closer in line with a maximum temperature rise of 1.5°C by the end of the century.

The purpose of the summit is not “to convene a conference to come to a consensus on a document,” he says. “It is to make country by country assume leadership and assume this ambition that is necessary.”

There are hints that this could work: just this week the United Kingdom committed to eliminating its carbon emissions by 2050 and Japan’s cabinet approved a plan to work to go carbon neutral. Last month, Germany too said it would work toward net zero emissions by 2050.

In response to a question about influencing governments that have been resistant to climate change, like the Trump Administration, Guterres said he has looked to encourage movements and people on the ground as a means to get governments into action.

“200 years ago, the decisions were made by the king,” he said. “Now more and more, we see government’s following public opinions.”

Guterres, who is on the cover of TIME this week, also discussed his recent visit to the Pacific, where he met with world leaders who are facing the effects of climate change firsthand. He described meeting a family in Tuvalu whose home is threatened by rising seas and recounted the call for urgent action he received from local leaders.

“The good thing about going to the Pacific is to see some of these people that we can rescue,” he said. “That gives us — an enormous, on one side moral obligation, but on the other enormous enthusiasm to do things.”

The excerpts below from TIME’s interview with Guterres have been lightly edited for clarity.

How does climate permeate through the portfolio of issues that you work on?

When you look into the agenda of the United Nations, you have a number of areas that are absolutely central to our activity, peace and security, etc. We are involved in the prevention of conflicts, and we are involved in trying to solve Libya, Yemen, Syria, South Sudan. But those are areas in which what we can do is limited.

We do everything we can… But as you know the Security Council is many times divided on these issues, so there’s a lot of damage control that needs to be done in order to seize all opportunities… It’s not an area where you can have easily a global leadership for a simple objective. And the same applies to several other questions.

Do you see the destabilizing effect of climate as a threat to multilateralism?

How do you reconcile the dire situation in the Pacific with the sort of optimism or the inspiration that you might get from seeing their resilience?

I was for 10 years high commissioner for refugees. That was the best in my life: to be able to be in regular contact with the people in the most dramatic circumstances, and to be able to do something, and there it was clear I could do it, to do something that could change their lives…

Now, here it’s more difficult because it’s more complex but at least with climate change I have something in which if I am able to assume the leadership, I’m able to mobilize leaders and make them take the right decisions, lots of people will not die, lots of people will see their lives improved. It’s not as direct as high commissioner for refugees because there I would be there immediately, but the good thing about going to the Pacific is to see some of these people that we can rescue. And that gives us — an enormous, on one side moral obligation but on the other side enormous enthusiasm to do things.

How has your job changed dealing with cities and states and institutions and other things that are filling the void of some of these countries that might be lagging? And do you see that as part of your remit?

This is an intergovernmental organization, so we have to deal essentially with governments. And that is large part of the work. But it is true that more and more power is distributed in societies… It is clear that if you want to achieve results, you need to mobilize those that have an influence in the way decisions are made. 200 years ago, the decisions were made by the king and that was easy, convince the king…

Now more and more, we see governments following public opinions, and so looking at the polls and looking at these things. To deal directly with societies becomes more and more important to influence political decisions. And so I think it’s my obligation when we deal with issues like climate change that are global issues, to of course deal with governments, but to concentrate a lot of my time in dealing with those that can progressively shift public opinions to make governments necessarily follow.

One thing I hear from various ministers and leaders of some of these vulnerable countries is that some of the processes like with the Green Climate Fund, or even with the UNFCCC, where one country can drag down the process, have become very difficult to deal with that. Are there various reforms that you think would be helpful?

Our effort now is less in relation to these mechanisms of decision and more and more — that’s why we are convening the climate summit — to ask countries to do their part. We all know what needs to be done. I mean the scientific evidence is there. We all know what needs to be done, and so we are pushing countries. I must say I feel we are having some success, but of course it’s still early. We’ll see how the summit goes. But to push countries to come with their pledges because they will have to renew in 2020 their nationally determined contributions and according to the Paris Agreement this is done country by country so the appeal, especially to the most important interlocutors here, the G20, is country by country there are things you need to do and to convince them. And I have to say that this dialogue has been quite interesting and I am hopeful that this will produce results. It’s not to convene a conference to come to a consensus on a document. It is to make country by country assume leadership and assume this ambition that is necessary… So my feeling is that this is the moment, not to look into the bureaucratic procedures, but to really raise ambition and make decision makers understand that this is the battle of our lifetime.

What concrete expectations do you have from countries? They don’t need to come up with their new NDCs [Nationally Determined Contributions] yet, but you also want more than just rhetoric. What’s the line?

The objective is to have NDCs in 2020, because that’s when the NDCs are supposed to be renewed, that are fully compatible with 1.5 degrees at the end of the century… September is an impulse in that direction, and a mobilization of more and more countries in order to make them understand… It’s to create a movement and to involve the public opinion, involve the business community, to involve the cites. What we need now is to mobilize the public opinion, and to mobilize the governments, and to mobilize the key stake holders, the key actors, for a common understanding that we need to do it. I mean it’s a challenge. But one thing is clear: we cannot lose this battle. 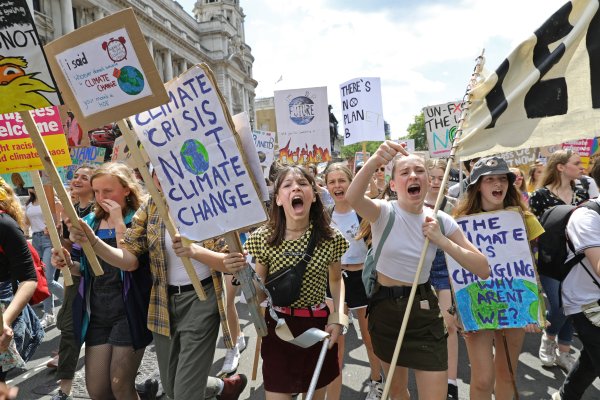 Students From 1,600 Cities Protest Climate Change
Next Up: Editor's Pick