It’s Sept. 20 — which means it’s the big day for followers of the “Storm Area 51” raid that’s been percolating since earlier this summer. And the attendees of the viral-Facebook-event-turned-Alienstock-music-festival are not disappointing. They’ve come prepared with signs and plenty of support for the supposed extraterrestrial questions that make the military base of Area 51 such an intriguing mystery to many.

Millions of people RSVPed to the original Area 51 raid, but those that have made the final trek to the small, remote desert town of Rachel, Nevada are the true diehard alien enthusiasts. See: their signage, displayed and captured by news photographers as the so-called “alien hunters” arrived near an entrance to Area 51 to perform a kind of protest. From “Locked up for what?” to “Save ET from the government” to “Clap alien cheeks” and “Raid that alien booty,” it’s an admittedly creative mashup of meme language and extraterrestrial terminology, with conspiracy theories thrown in to boot.

Government representatives and event organizers have repeatedly warned against attendees taking any drastic measures towards actually raiding the heavily-secured territory. But that doesn’t seem to be stopping the enthusiasm of the alien fans who have come out to take part in one of the strangest social-media-driven events of the past decade. In Rachel, they’ll find facilities provided by Alienstock, a music festival that will feature acts like the Brothers of Alien Rock and Speed of Light. On Thursday, original event planner Matty Roberts hosted an event in downtown Las Vegas. Another festival, “Storm Area 51 Basecamp,” is set up at the Area 51 visitor center in nearby Hiko, NV and will feature DJs like Paul Oakenfold and “alien experts.”

But for now, as things get started near Area 51, at least we have the signs. 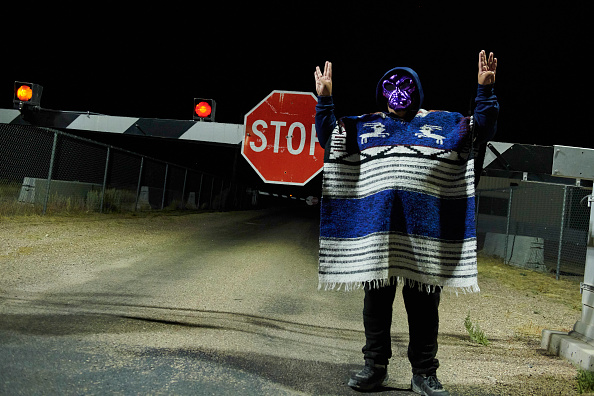 At Least 2 People Have Been Detained at a Gate to Area 51 and the Alien-Themed Festivities Have Just Begun
Next Up: Editor's Pick