About a month ago, I made a Gmail address for a fictional woman in York, Pennsylvania named Diane, about two hours west of Philadelphia, and signed up for emails from every Democratic candidate for president. The idea was to compare how the candidates were field-testing different policy proposals and trying to distinguish themselves in a field of contenders that is more than half the size of everyone who has ever been President.

After analyzing about 900 emails, including 581 just from the 10 candidates who appeared on stage in the third Democratic debate last week, I’ve reached one inexorable conclusion: They all want money. Short of that, they would be happy to send you a free sticker.

“Campaigns see email as a piggy bank or an ATM machine. The more emails you send, the more money you’re going to raise,” says Patrick McGill, a senior Democratic digital strategist for Blueprint Interactive who is not working for any presidential campaign.

This was certainly true of every email Diane received, which ran the gamut from chatty invitations to contribute $1, with subject lines like “Hey,” to urgent, desperate calls from low-polling contenders imploring the reader not to let the more established candidates bully them out of the running. There was a wide variety in the frequency as well. Since mid-August, Kamala Harris has sent 103 emails compared to 35 from Mayor Pete Buttigieg.

Amassing donations is particularly urgent for Democratic contenders this year. In order to qualify for the October debate, the Democratic National Committee requires hopefuls to have received donations from at least 130,000 unique individuals, including at least 400 in 20 different states, and polled at least 2 percent in four legitimate polls. As of Monday, 11 candidates have passed that mark, with the addition of billionaire Tom Steyer to the 10 who qualified for last week’s debate.

To be clear, Diane has not given a dollar to anyone, which would be neither ethical nor particularly legal, seeing as she doesn’t exist. She has never sent an email or posed as a human, but she does open every email, so as not to unfairly jeopardize any campaign’s odds of being banished to spam filters or Gmail’s “Promotions” tab.

She has also neglected to accept a free sticker, and not only because she doesn’t have an address. Doing so would pollute the second most-valuable currency of any campaign after the cold, hard variety: voter data.

When you sign up for a candidate’s email list, you’re typically asked for a ZIP code and, depending on the site, your name and optionally your phone number. You’re also giving the campaign another small piece of useful information: how you found your way to their signup page, whether through a Facebook ad, a tweet, or an old-fashioned Google search. This last route — an organic signup — is particularly meaningful, because it indicates that something inspired a potential donor and voter to seek out information on a candidate on their own volition. This is particularly useful information to gather during and after debates, when every candidate is hoping for a “moment” that registers with viewers and reporters alike.

There’s nothing intrinsically nefarious about this sort of tracking, though one ought not to be too naïve. As the privacy policy on Joe Biden’s website specifies — and this is generally true of every candidate’s site — accessing their page allows them to log information about your device and use cookies to track your behavior. Virtually all major websites do this (including TIME and most, if not all, other major publications), as you may have noticed from the ubiquitous cookie notifications the first time you visit them.

If it’s any consolation, the information you’re offering a campaign by signing up for their mailing list is probably not handing them the key to vast amounts of your personal information, for the simple reason that they don’t know who you are. As McGill notes, an email address is a largely useless way to identify a unique individual, since most of us have many accounts, some of which are for the explicit purpose of not being inundated by marketing when we order something online.

Which gets us back to the bumper stickers. On Tuesday, Kamala Harris sent an email offering “one free limited-edition Kamala sticker” that did not require a donation. To receive this bounty, one had to give their name, email, mailing address, and phone number. Many other candidates have made similar gestures in the month since Diane signed up for all of their email lists.

All of these candidates would surely be delighted if you attached your free sticker to your bumper, or even your forehead. But giving them your address is not, as it might seem, merely an automatic invitation to receive an endless train of mailers. It’s a way of trying to connect you to the vast amounts of voter information the campaigns already have.

In database science, this is called “merging” or “disambiguation,” and it’s a nightmare for even the simplest tasks. For example, I was recently trying to combine basic demographic data from the Census with county-level voting data since 2012, and kept ending up with too few counties. The problem: until 2015, Oglala County, S.D. was called Shannon County, which changed its code in the Census files from “46113” to “46102.” When you have to merge two datasets by the name of a county, it gets worse. Even after correctly matching the United States’ 31 Washington Counties to their correct states, there’s a very good chance that the two sources do not agree on whether Doña Ana County, N.M. really needs that tilde.

And that’s child’s play compared to merging hundred of millions of voters from public voter registration lists with any other source of information — the bread-and-butter of firms like NationBuilder and TargetSmart, which charge a premium on lists of voters combined with commercial datasets that offer some insight into which party they support. Voters are constantly moving — either to a new state, a new apartment, or the Great Beyond — and keeping track of them between lists leaves many uncounted. Campaigns typically acknowledge in their privacy policies that “we may receive voter file data from state parties and other Democratic organizations, from publicly available sources, and from private organizations.”

While free bumper stickers are a great way to merge databases, they can also turn up information on new, unregistered voters, though that can be rare. A forthcoming Stanford study recently found that nearly a quarter of adults are either unlisted or listed at an incorrect address in voter lists, so in an ideal scenario, campaigns are identifying these “invisible voters,” even if they cannot be merged with any other info. McGill says this is more likely for candidates closer to the fringe.

“If you’re more of a traditional candidate, like a Biden or a Harris, you’re probably not finding unregistered voters who are donors or signing up for your list,” he says. “If you’re Andrew Yang or Bernie [Sanders], you might be getting people outside the normal ecosystem.”

How one does that is more art than science. When an email generates a large number of donations, McGill says, “you don’t really know exactly what worked. But if they’re donating, you know something is working. It’s really hard to pinpoint which piece of the message worked.” And even if you can, what works today probably won’t work in a month. Years ago, a staffer for a Democratic senate candidate told me that the highest open rate they received on a fundraising email was the one where someone forgot to include a subject line. They didn’t try that again. 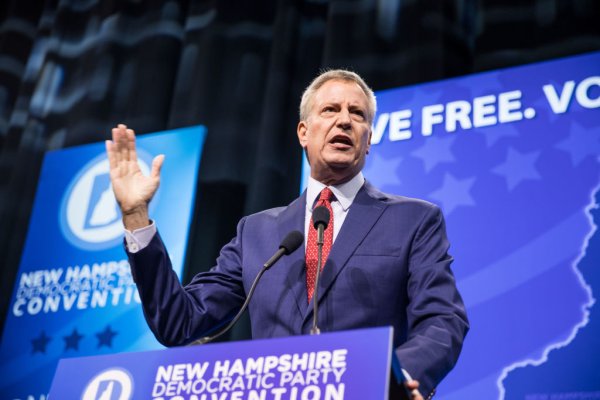 New York Mayor Bill de Blasio Drops Out of 2020 Race. There Are Still 19 Candidates Left
Next Up: Editor's Pick